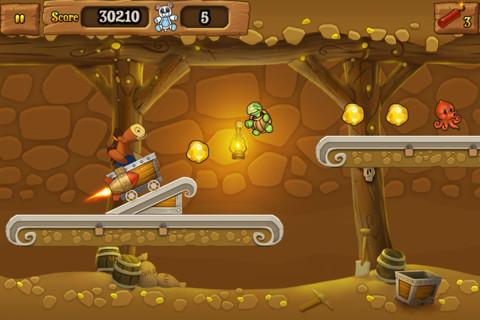 How the West was Fun

Wouldn’t you know it? The big town party is today and you’re running late. Not only that, but when you finally arrive, all your friends are gone – the victims of a voodoo curse. So, not only did you miss the party, but now you have to work your tail off to save the day. Welcome to Plushed Gold Fever, the game that shows you just how much can go wrong if you’re not willing to be punctual.

Plushed Gold Fever features what is quite possibly the greatest story to ever appear in a video game. No, seriously. Here’s how it goes: In what is perhaps the most adorable town in the Old West, plush animals live and frolic. However, a “voodoo mouse” is upset with how happy everyone is during a party in the saloon, so he casts a curse that traps the entire group in the surrounding gold mines. A plush horse, however, arrives to the party late, finds all of his friends missing, and saddles up to mount a one-equine rescue operation.

Admit it, that premise is so ridiculous that it’s golden.

Plushed Gold Fever is actually a group of three games within one title: “Gold-Grabber”, “Gold-Cart”, and “Gold -Smasher.”

Gold-Grabber is the weakest of these games; a claw-grab game where the a claw sits in a gold cart and rotates back and forth. Players have a minute per level to collect enough gold nuggets by tapping on the screen and firing the claw. Aside from plush animals, gold, and gems, though, there are also enemies and rocks that impede the collection process. Granted, the game is technically well-done, but it’s just a bit dull.

Gold-Cart, in turn, is a groovy little platformer that has the horse sitting in a mine cart that rolls along what has got to be the un-safest track ever constructed. Players have to swipe their fingers up and down to make the plush horse jump his cart over gapsin and rocks on the track, duck under low-hanging ceilings, and collect as many gold nuggets (and plush animals) as possible.

Gold- Smasher, meanwhile, is a block-smashing puzzle game that requires players to tap on chains of blocks in order to destroy them. The blocks represent dirt, stone, gold, and gems, and players only have a certain amount of time to smash enough blocks to earn enough points to advance to the next level.

Between levels, players can use the gold coins they’ve earned to unlock extra content like playable characters and temporary upgrades/items that can make things a little easier (for a while, at least). However, a lot of gold is needed for many of these purchases, and it takes a while to earn enough of it via gameplay. Not surprisingly, there’s an option to buy more gold with real money. 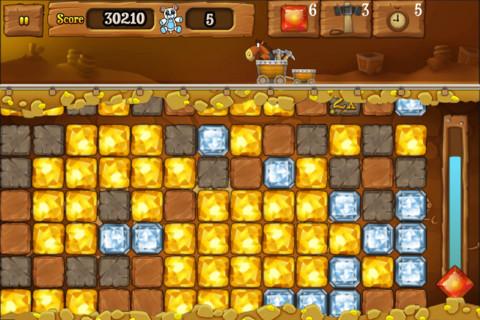 The audio, in turn, is fine – but nothing special. The soundtrack features an Old-West music style, but it doesn’t exactly stand out. The same can be said of the sound effects: They work fine, but they’re not exactly memorable.

Ultimately, Plushed Gold Fever is a lot of fun, providing two great minigames and one that’s just okay (though, admittedly, it’s far from bad). On top of that, there’s a ton of style to appreciate and replay value to take advantage of.