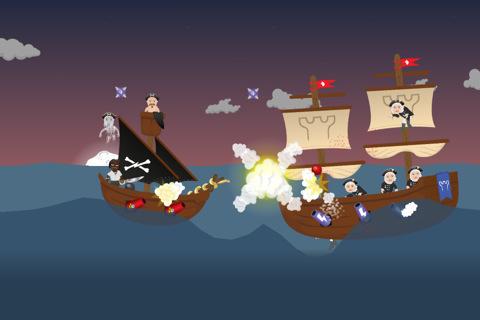 Ahoy, mateys! Long John Gamezebo here. I’ve just chartered a ship to venture into the very heart of treasure territory. At the end of the day, I’m looking to be the richest pirate that ever lived! But I could use a few crewmates. Care to come along? Fantastic! Then walk the plank and dive right in to our review of the portable pirate excursion Plunderland.

Taking to the high seas in their very own pirate ship, players of Plunderland will complete a series of levels in an attempt to earn a pre-determined amount of treasure. To do this they’ll battle the English Navy in ship-to-ship combat, terrorize native islanders, and even destroy a few local landmarks from time to time. Every action gives up coins that can be collected. Earn enough of these and you’ll unlock the next level, providing a new challenge for players and their salty shipmates.

The ship’s movement is controlled through tilting, tearing apart enemy vessels is done with a drag of the finger, and aiming your cannons is achieved in a manner familiar to any veteran of Angry Birds. Plunderland caters directly to the iPhone experience without ever managing to feel gimmicky – a rare accomplishment for a game that utilizes every one of the iPhone’s unique control opportunities.

In between levels players can visit the shipyard to purchase different ships and upgrades for their adventure using the treasure they’ve earned. Maybe you’d like to upgrade to double cannons, or purchase a bowsprit that can speed up the movement of your ship. Mix all of that together with 3 different campaigns, a survival mode, and the promise of free content updates, you’ve got a game that’s both fun and replayable.

And yet Plunderland isn’t without its flaws. The game’s biggest problem is cannon control. While mimicking the aim-and-release finger-drawing methods of other popular games, Plunderland never seems to hit that sweet spot that so many others seem to accomplish with ease. The action in Plunderland can be fast and frantic, and when combined with the motion of the waves, which causes your ship to bob up and down as you aim, it becomes much more difficult than it should to pull off accurate shots quickly. 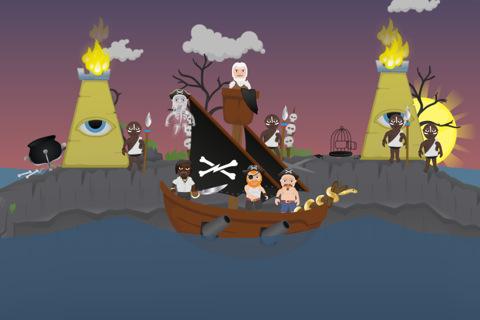 Mixed in amongst the high seas combat and occasional island plunder are a handful of floating structures that require an element of logic to solve. Players will need to avoid the structure’s cannon fire while figuring out how to destroy the floating building and move past. I’m generally not opposed to a little thinking mixed in with my action games, but in Plunderland it manages to break up the flow of an otherwise fast-paced experience. What’s more, the design on these structures feels cheap, like they’re hard not because they’re challenging but hard for the sake of hard – often because of the aforementioned cannon problem.

The game also features an assortment of power-ups that we quite enjoyed, be they the god-like power to tear ships asunder with your bare hands, or a super powerful cannon ammunition – but these items appeared far too infrequently. Being able to purchase ship upgrades was nice, but we would have liked being able to purchase these special items too. That way we’d have something to save us when struggling to complete a particularly fiendish level.

Plunderland offers up a truly unique experience that could only happen on the iPhone, with a great art style and enough fun to keep the frowniest of pirates smiling for days. The game isn’t without its flaws, but even in the face of some less-than-perfect cannon controls and the occasional unnecessary structure, we managed to find great pleasure in the booty this game of high seas piracy had to offer.