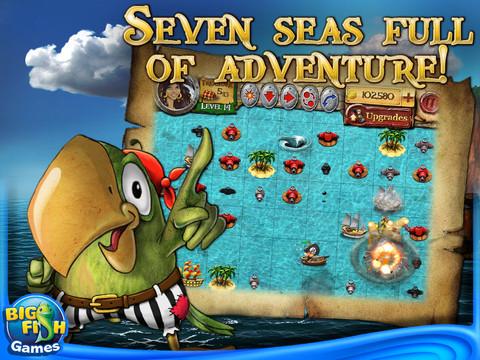 Plunder offers several hours’ worth of fun, but it retains some of the problems of its original freemium release

Those of you with long memories might recall that Plunder! set sail on the iTunes App Store many months ago as a freemium release, but it was lost at sea not long after its launch. And now, like a Black Pearl returning from the depths of oblivion, it’s back. It’s technically a paid purchase this time around, with a cargo hold crammed full of hours of fun and light puzzles, and although there’s some concern that its goods remain spoiled by the original freemium design, there’s treasure aplenty in store for those willing to accept its quirks.

At its core, Plunder! is about getting your ship from one side of the gridded screen to the other. That concept yields ample challenges of its own, but it’s the act of sinking the surrounding merchant ships carrying gold and treasure that makes the gameplay so fun. Plundering them doesn’t require firing on them directly (although you retain a single cannonball each round for that purpose), but rather skillful maneuvering of the fixed mortars that happen to be floating in the surrounding seas. Some fire in all directions; some only fire up or down or to the right or left — but you can use them to trigger a mass succession of explosions that transforms the tranquil Caribbean setting into its own battle of Waterloo. Sinking your target requires a couple of hits in most cases, after which you’re free to pick up the loot with a tap of your fingers.

“ It’s harder than it sounds. For one thing, the ships maintain a rightward course much like you do, and clearing the mortars (and obstacles such as islands) to the right of them allows them room to outrun your greed. And, of course, you need to keep an eye on your own ship’s progress. If you’re not careful, you can sink all of the surrounding ships but find yourself blocked behind an island or a mortar you can’t trigger because of positioning, allowing time for the navy to catch up with you and end your life of crime (and the game itself).
It’s a great idea, but it gets challenging fast. Thanks to the randomly generated maps, it’s possible to get stuck as early as the second stage, particularly if you don’t have enough gold from your plunder to buy boosts that nudge your ship to a different point on the grid or clear your path of obstructions. Upgrades also assist your voyages, such as rubber hulls that protect your ship from flying mortar shells — but they too cost a hefty fortune in gold. It wouldn’t be such a problem if gold didn’t drop at a turtle’s pace (despite the narrator’s quips that he could buy a solid gold peg leg with a ship’s plunder), and you’ll end up having to replay the game several times before you can afford to fling away gold on a single upgrade or boost.
The process grows maddening at times, but it has the upshot of giving you a lot of content for free. Thanks to the challenge of the random stages of each of the seven seas (or levels) and the need to grind gold for upgrades and the optional boosts, you’ll end up spending hours on the first free sea alone. Extra ships eventually ease the process somewhat, but they also cost a fortune. And, at any rate, it’s easy to lose them to the navy if you’re not willing to free them with boosts to circumvent the eventual obstacles that block their way. But so long as one ship manages to get through, you’re still in the game. 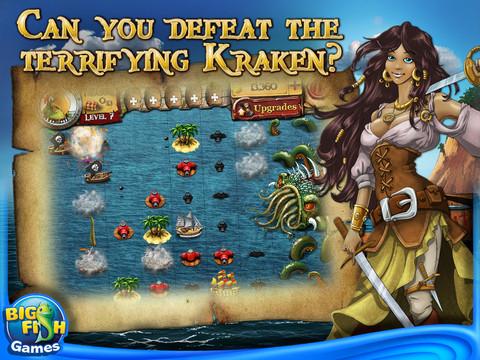 “ For me, that’s enough to make Plunder! a keeper on my phone. I loved the rush of getting through yet another stage, and there’s a genuine pleasure in watching your ship’s captain unlock the chests that drop randomly from the biggest ships and adding one of their 13 treasures for each stage to your trophy rooms. The challenges also retain their allure for several hours, and the quick escalation of difficulty and the unpredictability of the random maps ensures that the frequent pain of having to start over doesn’t last long enough to sour the experience as a whole.
Even so, it’s hard to escape the impression that there’s a barely concealed desire to plunder your bank account with premium gold purchases. But with the new design, it’s not the kind of game that forces you to these extremes. Provided you have your wits and a cargo hold of determination about you, it’s well worth the mere two dollars you’ll have to pay to unlock the content beyond the first free level.