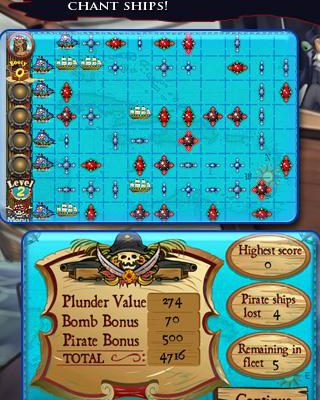 This pirate game is great, but the freemium approach needs to walk the plank

Shiver me timbers, I have a pirate dilemma! Namely, I’m torn about what I should do. I recently started playing Plunder!, a great puzzle game with a pirate theme, but I quickly realized it’s got a scummy side that will pillage your wallet at the first opportunity. Not only that, but a frustrating DRM-like service makes it unplayable at times. Should I turn a blind eye to these shortcomings and continue this illicit affair, or should I call things off and go back to more legitimate games? Also, when did I start sounding like the heroine of a tawdry romance novel?

When the game starts, you have a total of eight pirate ships that you must lead through a map peppered with mines which shoot cannonballs when you tap them. If a mine is red, it can be destroyed. Some start out ready to blow while others have to be hit with cannonballs from other mines before they, too, can be triggered. Each mine fires across the map in an up/down or left/right pattern, although some will fire in all four directions at once.

The goal is to get as many ships across the map as you can. This sounds much simpler than it is. Aside from the mines, there are also merchant vessels that sit in your ships’ paths. As you detonate the mines you’ll need to take out as many of these other ships as you can in order to acquire booty, which will grant you extra points (and occasional power-ups) once the map has been finished. A map is completed when you either detonate all the mines on the screen or there are no more you can actually blow up. Any of your ships that haven’t made it across the screen by this point are captured; when you eventually run out of ships, the game is over.

The gameplay is surprisingly easy to get into, as it’s both simple and engaging. Each level only takes a few minutes to complete, and no map is ever laid out in the same way. The strategy elements are smart and delightful, usually providing enough of a challenge to be fun without being too difficult. 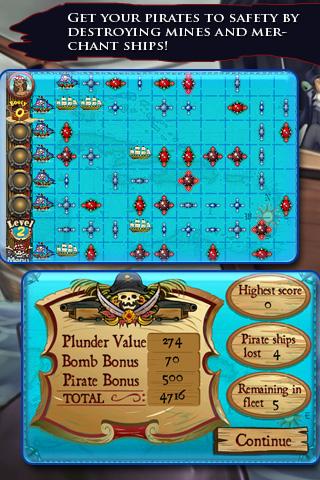 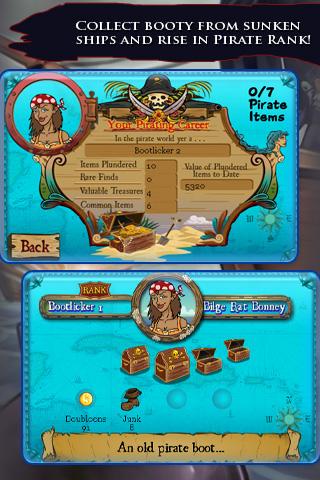 Despite the fact that Plunder! is a joy to play, getting to play it is another story entirely. Every time you start a new game, a coin is inserted into the treasure chest on the main menu; the problem is that you have a limited number of coins available, which means that you can only play the game so many times. While a few coins seem to be unlocked every day, the only way to get more than one or two at a time is to buy them. Granted, extra coins are certainly inexpensive ($4.99 for 600), but it seems like a cheap way to bilk cash out of gamers who would undoubtedly be willing to pay a couple of bucks for a game that didn’t use this coin system.

The other problem with running this game is that you’re forced to sign up for the Plus+ social network, and being logged in is a requirement to play. This makes no sense, seeing as how there aren’t any online portions to the game. More importantly, if you happen to wander into an area with no internet access (not all that difficult, seeing as how spotty AT&T’s coverage can be and since not all locations have wireless networks available), your game will immediately be interrupted and you’ll be unable to continue. As a result, playing the game is impossible until you can once again connect to the net.

Even if you can connect to the web, playing the game isn’t always a sure thing. There were a few times when I simply could not login, despite re-entering my Plus+ ID and password multiple times.

When I first started playing Plunder! I was addicted to it. It is, quite simply, a great game. Due to login problems and limited free plays, however, I quickly became disillusioned. Consider this one well worth a download, but don’t expect to enjoy it for long without ponying up for an in-app purchase.

Aerie – Spirit of the Forest Review