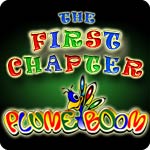 Other than as a logo for a major USA TV network, peacocks don’t get much attention… until now. Meet Plumeboom, proud peacock and hopeful hero, to save Orniland in Plumeboom: The First Chapter. Darkness has come over Orniland, a bird paradise where Crowbeak the Dark Wizard and Cornix the Evil Scientist plan to take over Orniland and turn the birds into evil warriors.

The evil birds put up conveyer belts to transport jugs of their evil potion all around the land. Plumeboom must exchange and line up jugs of a same color to explode them. Unusual about this match three game is that jugs appears horizontally and Plumeboom must throw a jug to make a match and to receive a replacement jug. Though the game’s help explains the jug swapping, an experienced three-in-a-row player may not catch this with other things to figure out. The game becomes more engaging after adapting to jug switching (not the same thing as swapping in games like Bejeweled) and the six bonus power-ups.

“Plume” means “a large and showy feather” and boom comes from blowing up the jugs, which creates awesome explosion sound effects. Eventually, the name and the character grow on me. Actually, this set the tone for Plumeboom: The First Chapter as a game that takes time to appreciate. Had the game come with more details, it would be more enjoyable and compelling for players from the get go.

Plumeboom offers badges (awards), but there’s no explanation for them. It’s hard to feel proud in earning badges without any clear meaning as to what you’ve actually accomplished. Players also earn coins to buy bonus power-ups. Thankfully, the available power-ups let you know how many coins you need to upgrade. One power-up is available at the start of the game, and the others become available later. You know you’re close to earning another power-up based on the percentage as shown on the power-up’s bottle. But how long it takes to go from 75 percent to 100 percent is anyone’s guess.

The game comes with six basic power-ups that you can upgrade so you see them appear more often and three supercharges that take a long time to earn. Players can only have one supercharge and they’re good for one use. What does it take to earn a second supercharge? Again, who knows?

The bonus game involves shooting flying cool-looking robot insects coming at Plumeboom. When the bonus game comes in is a guessing game. Eventually, the mini-game becomes more challenging when ladybugs appear and you must avoid shooting them. Just before the mini-game comes on, the screen displays humorous commentary. The mini-game provides a nice break from the jug swapping.

Plumeboom: The First Chapter also has a map showing Plumeboom’s progress in conquering the areas and shooing out the bad birds. Yep, we don’t know when to expect Plumeboom to advance to the next area of Orniland. Each round played contains an episode number and a level number, i.e. 1-4, 14-6 and 30-2. An episode consists of six levels. With 30 episodes at six each, the game contains 200 levels for conquering and saving Orniland. This doesn’t include the bonus game that unpredictably pops up.

Players can gain bonus points by dressing Plumeboom in the right gear for the current season or weather conditions. Raining? Get the umbrella. Fireballs? Put on the fireman’s hat. It sounds too easy to score clothing points, but getting further in the game can make a player forget to change Plumeboom’s garments. Those driven to for reaching top scores will need to stay up to speed on the weather and Plumeboom’s wardrobe. One problem — it isn’t obvious which outfit fits certain conditions. Figure it out by experimenting.

Prepare not to understand some elements or their meanings, such as what it takes to earn badges, when a power-up or supercharge becomes available or when you advance on the Orniland map. Also expect an uneventful ending, but it doesn’t affect the journey of playing the game. Over half of Plumeboom: The First Chapter is easy enough for an entire family to play together. The tricky part is learning the elements.

Unfortunately, it’s possible that you won’t fully grasp the game within the first hour — the trial hour — of playing. Once you pass that, however, Plumeboom: The First Chapter turns into an engrossing game. The title hints another Plumeboom game, and we look forward to it pending improvements.