Most of the game is pretty formulaic in terms of game design. The combat system doesnâ��t allow for actual thought.

Text-based social games have been around for a few years now, with many of them modeled after the successful Facebook game of Mafia Wars. A newer game for iOS named Please Stay Calm, however, is taking that formula and weaving it into a location-based style of play. Combining several familiar gameplay mechanics, it connects users together and tasks them with surviving the frequently used “zombie apocalypse.” Developed by Massive Damage, the game offers many good ideas, even if they sometimes feel a bit unrefined.

The long and short of the game is that the government of 2014 has told the citizens of the world to “please stay calm” as it flees the wave of infected spreading around the globe. Leaving everyone to fend for themselves, players must investigate real-world locations in order combat the undead, scavenge for resources, and just simply stay alive.

In order to make it through the zombie apocalypse, players must use their GPS location to investigate nearby businesses. Upon investigation, they will be presented with a number of zombies that infest the area, and will be able to either scavenge for supplies or fight the horde. The former is a basic mini-game in which players consume the slowly recharging resource of Energy. They are given the option to scavenge within one of three rooms broken up by difficulty. The harder the difficulty, the more Energy it costs and the more zombies there are. However, these areas offer significantly greater rewards (in terms of quantity).

The way the Scavenge game works is players move a flashlight about with their finger in order to highlight roaming dots. Yellow dots indicate supplies, white dots indicate special equipment items that enhance the player’s character, while yellow-green dots are zombies. Should a zombie move into the light’s field of view, the mini-game will end (but it can be tried again).

Sadly, the game doesn’t really tell the player the meaning of different dots, and they look so similar that it does lead to some irritation until the slight distinction is seen. Once scavenging is finished, it will not be available at that location for several hours. What makes it important, however, is that supplies gathered are the required currency to purchase support items such as healing packs.

These become particularly useful when battling the undead, as healing packs cannot only be used during battle, but also to expedite the rate of healing (without them, health regenerates very slowly). Like the scavenge option, players can opt to fight different quantities of zombies at a location in a quasi-turn-based RPG fashion. When entering a battle, the player is given a randomly generated set of six attacks based on what weapons they own. Unfortunately, and this is one of the complaints for the game, these options are only on screen for about a second, giving the player no time to really consider their decision. Regardless, after an attack is done, the zombies will attack and this back-and-forth will repeat until either the player or the horde is dead. 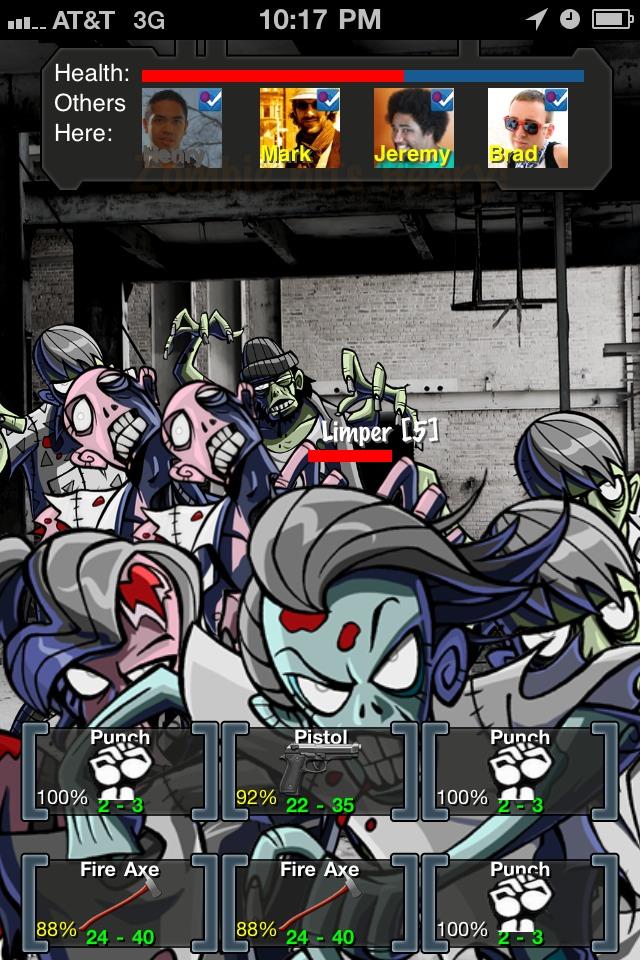 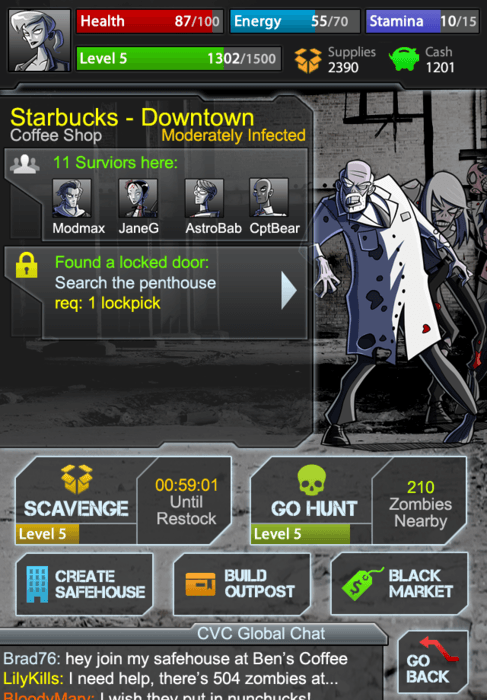 What makes this exchange critical is it is how players actually level up and unlock new equipment as well as earn cash for buying new defensive and offensive items (e.g. guns and armor). That said, leveling is rather slow for between scavenging and combat, players will run out of Energy extremely quickly. During that downtime though, they can “duel” other players at the cost of Stamina in order to garner some extra income and experience.

The other major social element of the game is the concept of Safehouses. In essence, these are nothing more than a guild, mafia, family, or whatever else the player wishes to call it. Users group together and share a pool of supplies, and must contribute to upkeep the Safehouse as a whole. Still, this has been seen and done before.

The more interesting social element is that Please Stay Calm actually allows players to sync up their game with Foursquare. Whenever they check in from Foursquare, they are able to investigate that nearby areas as well.

As for any other aspects of merit, Please Stay Calm also offers the ability to create and manage Outposts. Again, this comes from the text-based RPGs of Facebook, and consists of buying “properties” that will passively generate extra cash and supplies. Aside from this, the game has an interesting cartoon style to it and is incredibly simple to pick up and use. Also, it boasts leaderboards that are specific to one’s locations, which means that wherever one is checking in from, they can see just who has slain the most zombies or has picked up the most supplies there.

Please Stay Calm is a nice spin on the social, text-based RPG genre. Though it reuses most of what those games already use, its location-based mechanic and Foursquare integration offers a very interesting bonus and adds a great extra to the already popular practice of mobile check-ins. Its combat system is a bit wonky and doesn’t really allow the player to think much about what they are tapping, but it is really only picking nits at this point. Free-to-play, Please Stay Calm is an interesting new location-based RPG that is certainly worth trying if you are a fan of zombies.