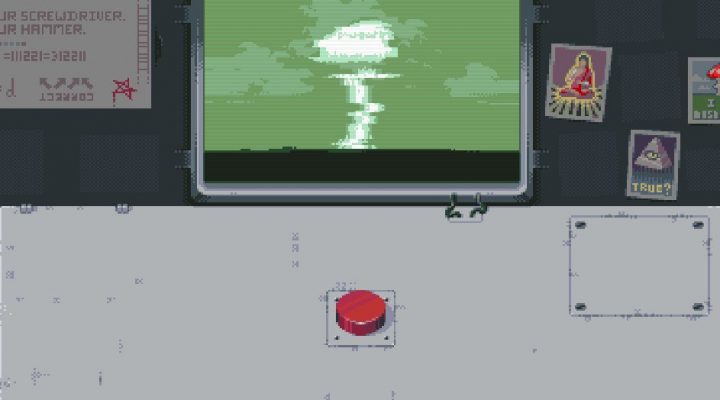 Many of the puzzles are pretty obtuse

Not a whole heck of a lot to do

Please, Don’t Touch Anything is a weird bit of interactivity that I think could best be described as a puzzle game. Kind of. Maybe. To an extent. It’s sort of like a puzzle box that’s full of tinier puzzles. And each of those puzzles can vary wildly between extremely easy to “what the heck even is this?”

I’d almost liken it to a digital analog to the Puzzle Box from the Hellraiser movies. It looks deceptively simple on the surface but becomes increasingly complex as you start to fiddle with it and unlock more secrets. Whether or not this includes Cenobites is open to interpretation. 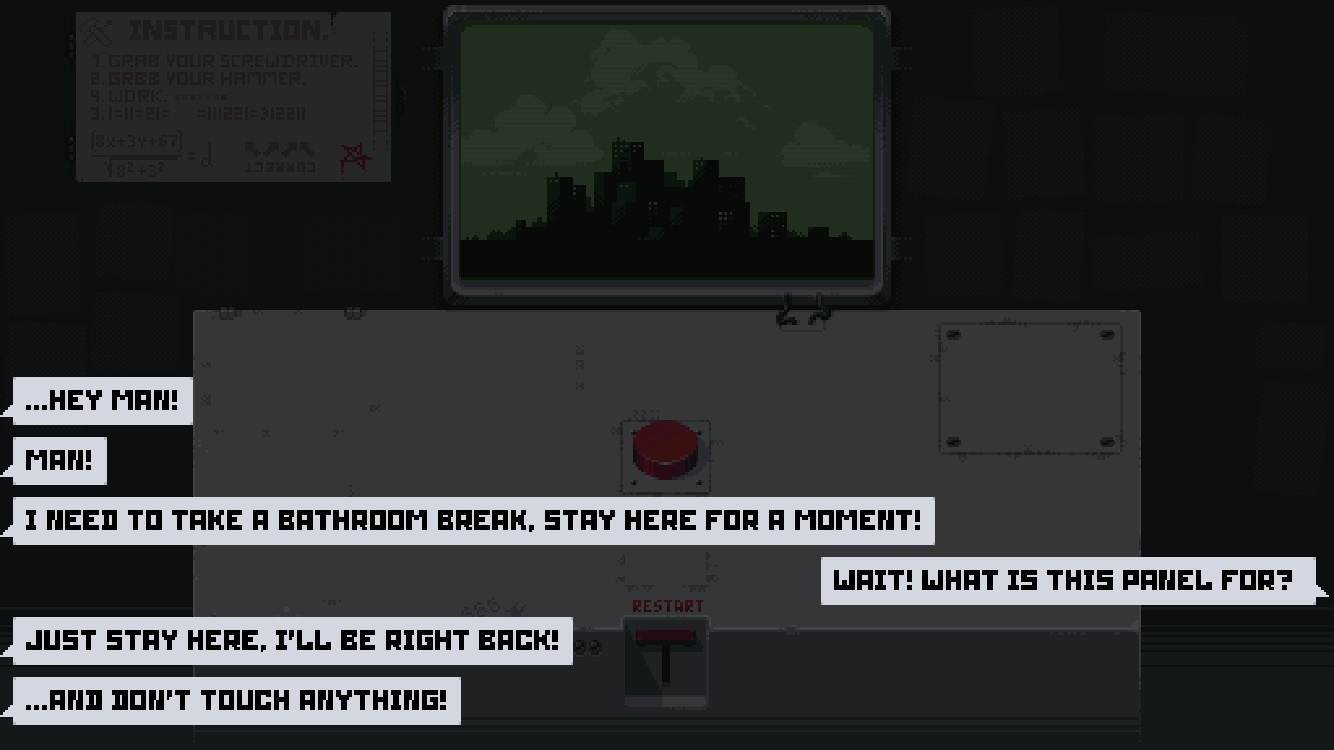 You play the part of a hapless anybody who’s visiting a friend at work. This friend has to take a quick break from their very official-looking control console and tasks you with looking after it in their absence. Oh, and don’t touch anything, naturally. But come on, how could you resist?

Once you’re left alone with this thing it’s time to start pressing buttons and toggling switches. Things start out simply enough with a single red button, but pressing it will flip open a panel with a switch on it. Pressing it again will slide open another panel to reveal a few more buttons. Flipping that switch does a thing, pressing those new buttons in a specific order does a thing, continually pressing the big red button over and over does a thing – even doing nothing does a thing. All the sliding and flipping panels look pretty good, too. The game uses its somewhat subdued but still enjoyably stylized pixel art aesthetic to great effect. 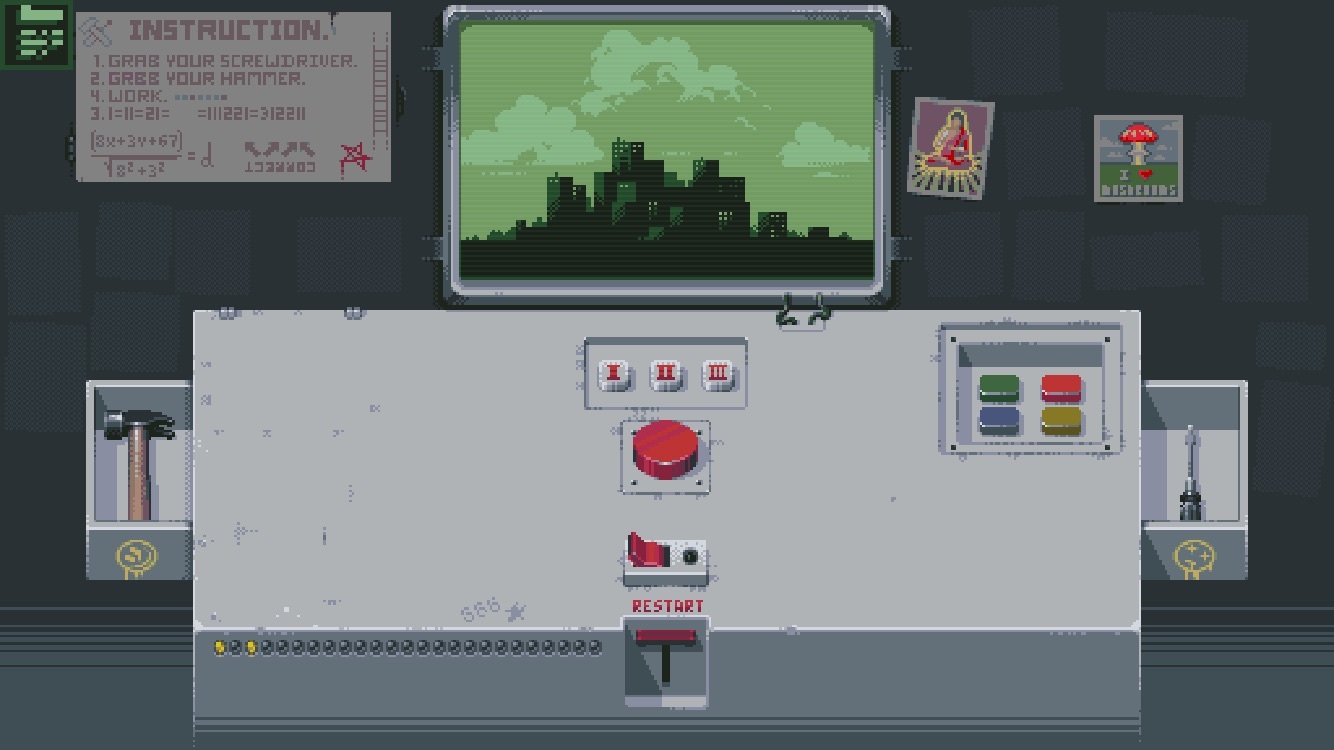 The entirety of Please, Don’t Touch Anything is playing around with the ever-changing console and seeing what everything does. Then trying to figure out what order you need to do things in so that you can discover each of the multiple “endings.” And goodness are there a lot of them. Every time you find a new one you’ll get a little reminder on the wall in front of you, which is a good way to tell at a glance how many other things you still need to find. Actually finding them can be a bit tiresome, however.

Don’t get me wrong, it’s kind of fun to play around with all the buttons and find new secrets. Some of the hidden stuff can be pretty funny, and there are more than a couple of nods to other games here. The problem is that many of these puzzles aren’t all that easy to figure out. In fact, most of their solutions are either too well hidden by cryptic messages or seem downright non-existent. And assuming you manage to figure some of them out on your own, you’ll most likely have to remember them for later because some elements of the console can’t be accessed unless specific conditions have been met. In other words you’ll be punching the same sequence of buttons over and over so that you can try every little thing after you reset. 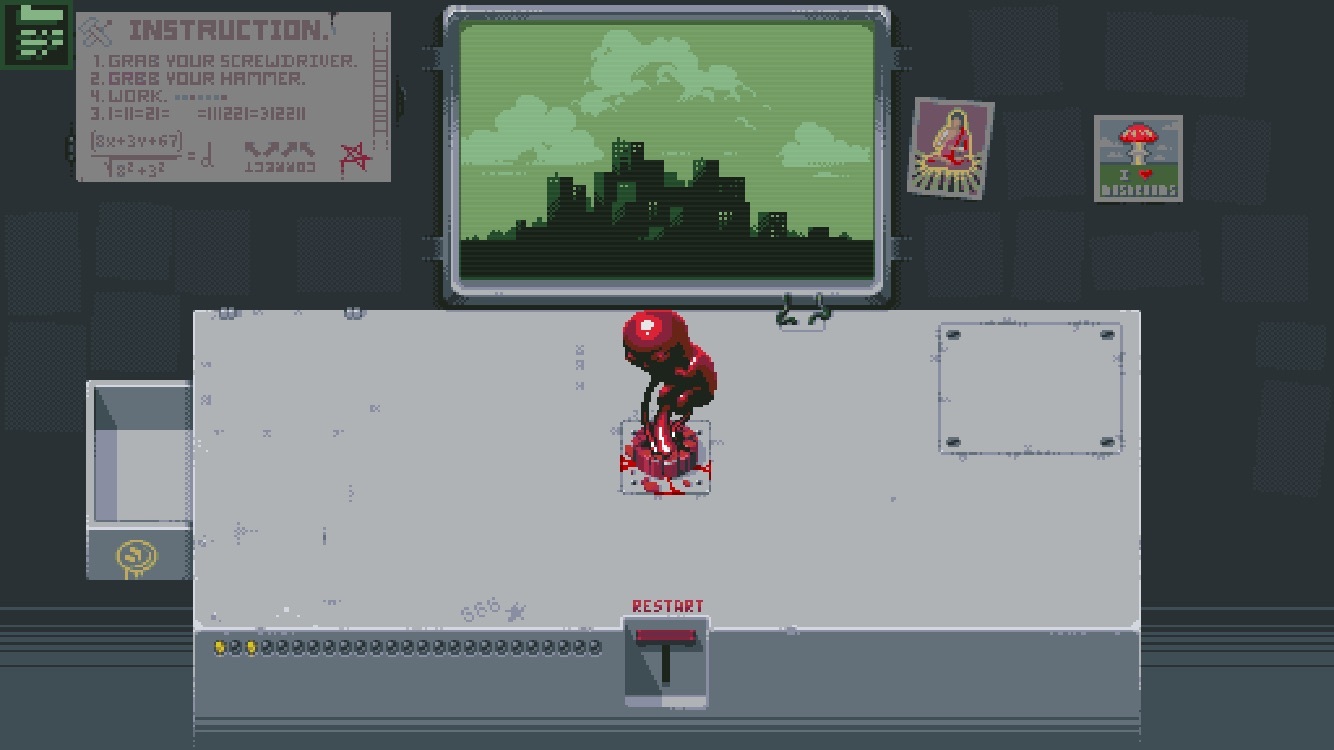 However, the biggest problem I could see for many who are trying Please, Don’t Touch Anything for the first time would be the lack of interactivity. Sure you get to press all these buttons and even unscrew some panels, but there’s hardly any meat to the gameplay – if you can really call it that. This is a puzzle in a far more strict sense than a lot of players might be interested in (or even familiar with). It’s much more akin to putting a jigsaw puzzle together or fiddling with a Rubik’s Cube.

The lack of action will probably put off its fair share of players, but I still think Please, Don’t Touch Anything is a riddle worth exploring. If for no other reason than to see how many in-jokes have been crammed into its more obscure puzzles.