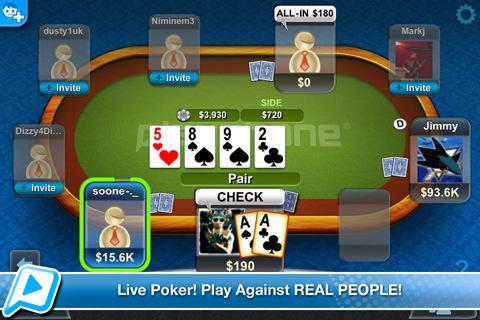 PlayPhone Poker is a decent cross-platform poker game, but it feels awfully familiar

Remember Zynga Poker? That was a fun little app. It might have been a somewhat limited experience, but it was still surprisingly compelling for a freebie. Seems PlayPhone has decided to completely rip off the idea, repackaging it with only a few minor changes and presenting it to mobile gamers as PlayPhone Poker.

For the uninitiated, PlayPhone Poker (and Zynga Poker before it) is a simple version of Texas Hold ’em. Each player is dealt two cards face down, and the dealer places five community cards face up over the course of three turns. It’s a fun game of poker, perfect for the online-social scene.

PlayPhone Poker is a completely online affair, requiring either a Facebook or PlayPhone account. Set up is fairly painless, and jumping into a game is equally hassle-free. Players are given a daily allowance of 5,000 chips, though you can purchase additional chips at what seems a reasonable enough price. I found the free portions to be enough to get me through quite a few hands, but depending on the table you’re sitting at, losses can be substantial.

There are two main gameplay options here at your disposal: Play Now, which seats you at the first available table (a virtually instantaneous process), or you can sift through tables manually. Once at a table, you can communicate with other players via text, as well as tap on player icons to check out their win records.

Unfortunately, the game design itself isn’t original whatsoever. Just about every element of PlayPhone Poker is lifted right out of Zynga Poker, down the timer that whittles away during each player’s turn. This is no homage; it’s a complete cut-and-paste job. Table design, player features – heck, even the sexy avatar on the title screen – PlayPhone Poker is an absolutely shameless rip off.

In spite of PlayPhone’s complete lack of imagination, PlayPhone Poker is a fun game. It also innovates (if ever so slightly) over Zynga Poker with its social features, allowing you to view other players’ bio info, as well as offering cross-platform multiplayer between iPhone and Android.

Where PlayPhone Poker misses a golden opportunity, however, is in not offering more variety with its table stakes. Instead of making it easier for players to find cheapskate pots or big-cash tables, you’ll have to perform your own search in order to find the table that’s right for you. There’s also no option to view a player’s profile before actually sitting down at a table, even though the player icons are in plain view.

PlayPhone Poker‘s visual style is slightly more photorealistic than the more cartoony design of Zynga Poker, but the layout is otherwise completely the same. The sound effects are a tad more pleasing, and there’s a legend of poker hands available for folks a little rusty on the game.

I enjoyed PlayPhone Poker, and though it comes to mobile platforms with only a very small handful of features not present in Zynga Poker, those features ultimately make it a better game. However, it’s absolutely impossible to ignore the fact that PlayPhone outright cut and paste their ideas and design directly from Zynga’s game. Play it, enjoy it, but you might want to think twice before giving them any of your hard-earned cash.