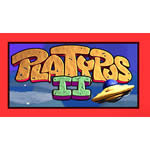 Now here’s something you don’t see every day, let alone within the casual games arena: A side-scrolling spaceship shooter with a candy-colored visual style that’s seemingly been ripped from a Claymation short.

Nonetheless, that’s just what trigger-happy fans hungry for more mile-a-minute action get in frantic aerial showdown Platypus II, which pits players against the evil Collosatropolians in the sequel to one of the Internet’s most recent popular arcade blasters.

According to the storyline, the peaceful inhabitants of Mungola are once again under attack, and only you can save them. No fancy setup or intros here either. Simply choose from one of four ships with alternate firing methods (e.g. front- and rear-mounted cannons, angled shots or wave-like attacks) and obliterate anything that moves – the adventure is literally that straightforward.

Cruising past simple, yet attractive backgrounds including tree-covered hills, bustling factories or glacier-choked arctic seas from which the Statue of Liberty’s arm pokes out, you’ll find that reflexes are everything. Enemies like swooping fighter planes, undulating UFOs and chugging battleships constantly attack, appearing on-screen from every direction. The upshot: You’ll not only have to tap away furiously on the fire button, or leave it permanently held down, but constantly be ducking and weaving, responding to threats at a second’s notice.

While the pace may be a bit more frantic than mainstream audiences are used to, the presence of cooperative play options and selectable difficulty levels does provide some small assistance. Capable of being controlled with a mouse (the recommend option), keyboard or joystick, the outing’s best experienced in the company of friends, who can fight alongside you on a single computer. Having to share a limited of supply of continues – which must be utilized as backup when all of your shields and lives have been depleted – isn’t fun. But depending on your personal skill level and familiarity with the genre, it may be better than the alternative: Facing an endless array of baddies and even bosses, i.e. giant caterpillar-like aircraft and submarine mechanical horrors, all by your lonesome.

Happily, collectible power-ups come in many flavors and can help you turn the tides of war. For example: Destroy certain groups of enemies, and they’ll leave bonus stars behind. These stars change color when shot and convey varying powers based on their current hue ranging from auto-fire abilities to options which let you shoot rockets or foe-crushing sonic waves.

Crates additionally float onto the screen that can be smashed for score multiplying boosters, invincibility-conveying items, crackling lasers or extra cannons that rotate around your ship. Beware, however – pop the balloons holding them and they’ll quickly disappear from play. Point-awarding fruit such as bananas, cherries and grapes can further be snagged, all of which fragment when shot. Collecting individual pieces instead of bunches is a great way to earn even bigger tallies, and possibly a slot on the built-in high-score table.

While there’s little variation between stages besides slight background changes and the addition of a couple enemies, it’s hard to be too critical of the overall experience. Sure, you can encounter entire sections empty of danger by killing certain enemies too fast. And yes, the graphics aren’t exactly cutting edge. Still, the title handles like a charm and offers instantly familiar thrills to anyone who’s tried an arcade classic like R-Type, Raiden or Gradius. Added bonus: It even features music from the likes of Rob Hubbard, Martin Galway and Ben Daglish, composers famous for their work on similar diversions in the ’80s/’90s on classic computer the Commodore 64.

Meaning that the game is largely a retro throwback… Not to mention one that’s merely enjoyable and not particularly innovative at that. However, as anyone who’s ever pumped a pocketful of quarters into Space Invaders or Galaga will note, it’s hardly what we’d call a problem.