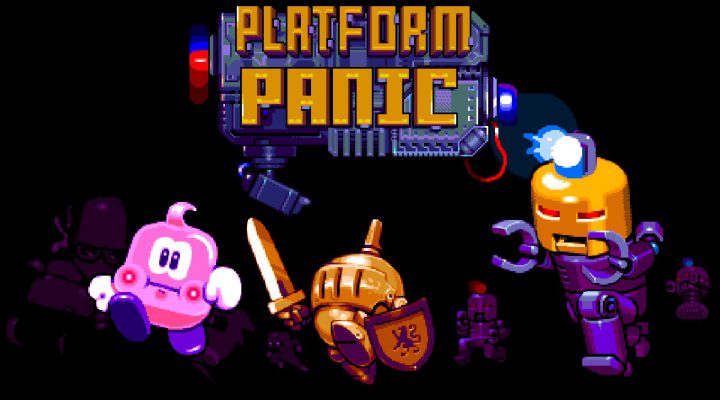 Offers a lot without requiring any IAPs.

Excellent new take on both platformers, and infinite runners.

New characters are more of a superficial add-on, not a benefit to the game.

The infinite runner is a relatively new concept, and is still evolving. That’s not to say Platform Panic is an infinite runner. But it is part of this sub-genre’s close family, and is an inspired step forward in this evolution of quick playing, intense, touchscreen-suited game.

And while it’s pushing the style of smartphone gaming forward, it also takes a serious look back and provides a delicious homage to the pixelated platformers of yesteryear that we know and love so well. Most impressive of all, Platform Panic accomplishes all this seamlessly to become a hard hitting neo-retro extravaganza that’s at once unique, and also comfortably similar to a host of other excellent games, new and old.

Okay, enough of the lyrical wax. What’s it actually about?

The game begins in the same room each time, as your robotic buddy drops from the top of the screen and begins his journey through the perilous platform-built maze. It’s a flip-screen game, much like classics such as Cybernoid and Rick Dangerous, and delivers a new, dexterous puzzle to solve each time you exit one room and enter the next. This, as you can see, is very retro. Even the visuals and music adhere to the nostalgic gaming angle very tightly.

What’s different is the way in which Platform Panic plays out. At first it appears as though the levels might be procedurally generated, but after a good few attempts it becomes clear that it’s actually randomizing a large number of different rooms. The effect is much the same, however, and there are enough different levels that it takes a good hour or more before you begin to recognize specific ones. Your character’s movement is equally contemporary, despite the game’s classic visage.

The robot never stops moving, racing in one direction until he meets and obstacle and turns around, or sprints into his own demise; whichever comes first. The controls are therefore very simple and accessible. A left and right button, accompanied by a jump button, and that’s all you need to navigate the platforms and perils.

This adds a huge amount of urgency to the game as you enter a new room, as you’ve often very little time – if any – to study its layout and figure out how to get to the exit safely. Instead you need to hone your twitch gaming skills and solve the physical puzzles on the fly. Collecting coins as you go lets you buy a continue when you die, or to unlock new characters, each of which gives a sly nod and a wink to classic characters such as Mario and Sonic. Or you can buy coins via an in-app purchase to keep your game going, buy new characters or to remove the (occasional, and non-intrusive) ads.

But Platform Panic gives you a lot for free, and deserves a permanent place on your home screen this holiday season. It’s the perfect way to while away the hours during seasonal family visits.