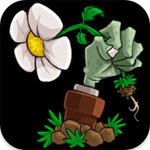 While real gardeners were getting ready to break ground on a new planting season last spring, gamers around the world opened their own pack of seeds – one that could grow plants to do battle with the undead! Like many PopCap games before it, Plants vs. Zombies became a worldwide sensation seemingly overnight. Now, little more than a year later, PopCap has seen fit to bring their unique brand of tower defense to the iPhone.

Like the PC/Mac version that came before it, in Plants vs. Zombies for the iPhone you’ll be defending your home from an onslaught of zombies, equipped with little more than a green thumb. You’ll be presented with a variety of wacky but effective plant options, unlocking more and more as you go along. You’ll have plants that shoot peas, plants that slow enemies, and even plants that explode. As the zombies move from towards your house, you’ll need to plant your defences in their path to take them out.

The game offers a fun and unique twist on the tower defense genre that seemed to be a perfect fit for PCs – but I couldn’t wrap my mind around how they would bring it to the iPhone. After a few minutes of play though, it became pretty clear that PopCap knew what it was doing. Seed selection and planting is done with a simple tapping motion, the screen is laid out in a way that nothing ever feels cramped or obscured, and the nothing seemed to be sacrificed in terms of visuals. Everything was tweaked to facilitate a perfect iPhone experience, yet the game never failed to feel just like its PC predecessor.

In fact, this game is exactly like the PC/Mac versions that came before it. Plants vs. Zombies includes all of the plants, levels, and zombies to the table that were included in the original game. That means you’ll be facing a lengthy 50 level campaign, choosing from more than four dozen plants, and squaring off against a seemingly endless assortment of zombies. Squeezing this much content into the iPhone is an absolute triumph.

The flipside, of course, is that this is exact same game you’ve already mastered. Plants vs. Zombies for the iPhone brings nothing new to the table. No new zombies, no new plants, no new mini-games – nothing. This is a straight-up port of a product that most of us are already familiar with, making it hard to for some to justify re-buying the game simply because it’s on another platform.

Still – at $2.99 it’s a hard purchase to pass up. There are reasons that the PC/Mac version became so universally loved, and all of those reasons survived the transition flawlessly. In fact, everything about this port could be described that way. The only noticeable omission from the offering here is in the bonus modes. The Survival, Puzzle and Zen Garden modes that were featured in the original are nowhere to be seen in this offering. Still, considering how well the rest of the package is presented, I think we can all agree the loss of these modes is a small price to pay.

We were also surprised by how smoothly the game seemed to run under any conditions. A number of reviews circulating around the internet are suggesting that there was a good deal of slowdown when the screen was filled, but we didn’t find this to be the case. It should be noted that we reviewed the game using the iPhone 3GS, and it’s possible that the performance issues other press outlets are reporting may have occurred on other models. In the case of out 3GS though, everything ran just as smoothly as it did on the PC.

Plants vs. Zombies on the iPhone is a tremendous package and an outstanding value. Rather than rushing an iPhone port out the door, PopCap Games took their time and did things right. We can say with absolute certainty that Plants vs. Zombies on the iPhone is every bit as good as it’s PC counterpart. This would have been an easy recommend at any price, but for only $2.99? You’d have to be a brain-dead zombie not to buy it.