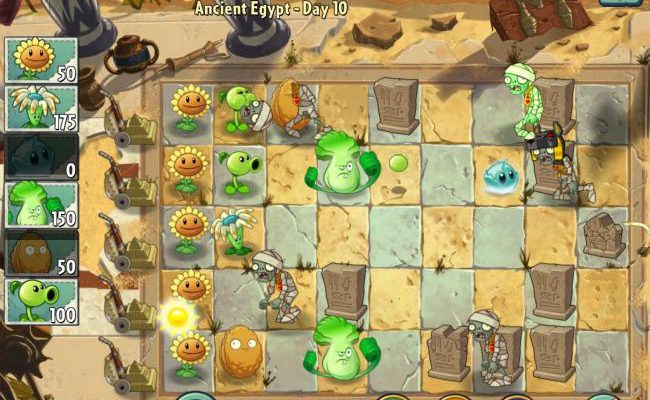 There are very few games out there of any genre or audience that have achieved such a worldwide adoration as PopCap’s Plants vs. Zombies empire. Sometimes it’s hard to know what you should expect from a sequel to a game that holds such a massive cult following among gamers old and young alike. There have already been some pretty high expectations surrounding PvZ 2, and to be honest, it’s even a bit intimidating to be the one who gets to write this review. Because as I realized as soon as I started playing the game, how can I possibly put into words how amazing Plants vs. Zombies 2: It’s About Time truly is? Well after years of waiting, I’m happy to say that it is finally time to get those plant packets out and start protecting your time-traveling brainz once again.

The first thing you’ll probably notice about Plants vs. Zombies 2 is the giant step up from the first game in the visual department. While most of the basic design elements are relatively the same as the last game, everything has been made ten times more polished, and no minor detail in animation has been overlooked here: just look at how much care and attention has been put into something as simple as the Pea Shooter firing off a single pea. The soundtrack is also back in full force, with lots of different sounds and melodies, but also lots of smile-inducing hooks that you’ll remember from last time as well. 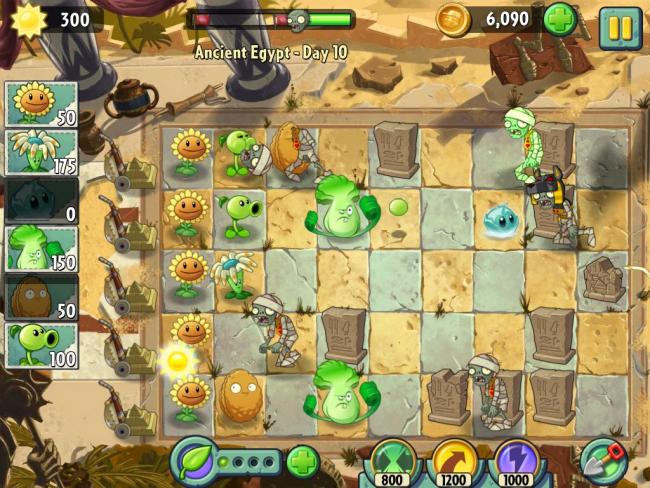 In the game, players are tasked with traveling through time alongside Crazy Dave and series newcomer Penny, Crazy Dave’s talking time-machine van, so their bucket-headed mentor and guide can enjoy re-eating the same taco all over again. The “story” is probably the weakest part of the entire experience, but the silly banter between Crazy Dave and Penny is always spot-on, and the narrative framework still serves as the perfect setup to some wonderful environments and set pieces, as players go through the game’s initial three themed worlds: Ancient Egypt, Pirate Seas, and the Wild West. Plants vs. Zombies 2 is filled to the brim with new plant types and even more new zombie designs, and all of them fit seamlessly into the quirky and loveable world that PopCap has meticulously created.

The new plant types you’ll come across are probably some of the best in Plants vs. Zombies history, with the pummeling Bonk Choy and his frenetic green punches becoming one of my early favorites, but with the Coconut Cannon and the gastrointestinal distress-inducing Chili Bean ranking right up there along with him. While every new zombie type is inherently unique and distinct in its own right, there’s still some familiar and welcomed mechanics that carry over, like the Barrel Roller Zombie’s likeness to the original game’s Zomboni. And then there’s just some wildly new ideas altogether, like the Chicken Wrangler Zombie – and probably the less we say about him, the better. 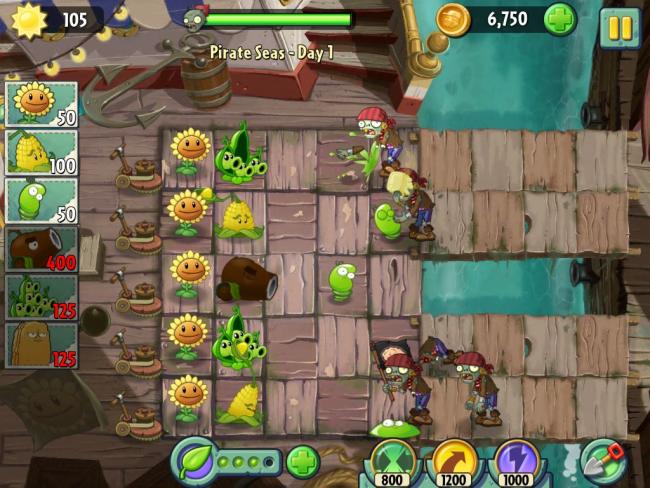 The best thing about Plants vs. Zombies 2 is that PopCap has managed to introduce so many exciting new elements into the mix, while still retaining the classic flower defense formula that turned so many of us into PvZ enthusiasts over the last several years. The biggest and brightest of these new elements is easily the Plant Food, which powers up the attacks of any given plant for several seconds, and it’s going to be hard now to imagine a game of Plants vs. Zombies without it. Give some Plant Food to a Pea Shooter, and watch a barrage of green bullets fly in a deadly flurry that will easily mow down any zombie headed your way. Send some Plant Food to a Sunflower’s way, and get ready to start scooping up the frantic burst of Suns that pours out. Additional Plant Food packets can be picked up during regular gameplay by popping the heads off of special glowing zombies, and these appear frequent enough that you’ll rarely be hurting for a Plant Food-induced burst.

The new in-game world maps are another healthy addition to the franchise, which allows for almost immeasurable replay value once the main campaign is completed. There’s even a fun daily challenge-type of component, in which a Treasure Yeti will randomly pop up over time on an already-completed level, and playing it again rewards you with the Yeti’s coveted lunchbox, which is always filled with much-needed prizes, like golden keys that you’ll need by the handful to open up alternative pathways on the map for access to other optional levels. Curse you and your lunchbox, Treasure Yeti!

You’ll even have the one-off mini-game types of levels, which serve as fun and lighthearted distractions from the regular flow of gameplay, and where you’ll be tasked with doing everything from matching like-symbols on the stone tablets of Camel Zombies, to shooting down dozens of Seagull Zombies with an armada of Coconut Cannons to score the highest combos. Veering off the main path to complete these optional missions also rewards you with new plant types and other bonuses, like the ability to carry one extra Plant Food packet, or starting off each level with a complimentary 25 Sun. 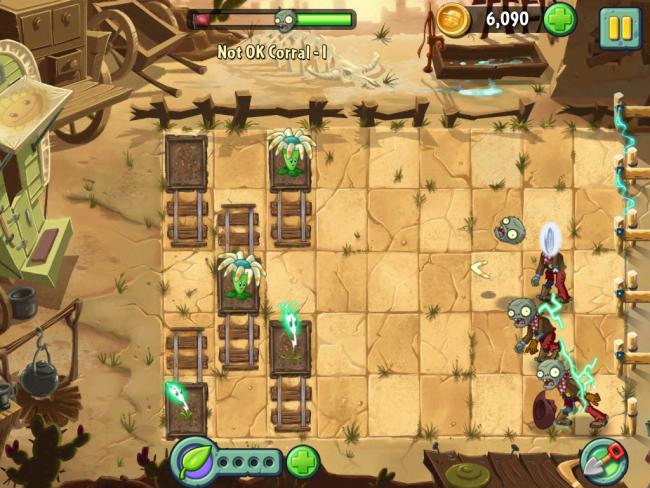 After each world is completed, you’re then encouraged to go back and earn up to three stars on every main campaign level, which is a challenging task in of itself. Parameters for earning stars will range from pretty simple, like never exceeding 15 plants on the screen at any one time, to refreshingly challenging, like going 120 seconds without spending any sun while never losing more than 2 plants to the oncoming horde. Although earning every star in the game can sometimes get just a little bit repetitive, as you’ll need to replay each level a minimum of three times to nab all three stars, you certainly can’t say that Plants vs. Zombies 2 ever leaves you without anything to do.

I also think it’s important to alleviate any fears over PopCap going free-to-play with Plants vs. Zombies 2, as the usual tropes of a freemium game are so nonexistent in the experience that you’ll quickly forget that this game didn’t cost you a dime. The only things that are actually locked behind a paywall are a few extra plants from the first game, like the Snow Pea and the Jalapeno, which are mostly included for nostalgic purposes. You in no way, shape, or form need any of them to complete any part of the game, but PvZ 2 is so good that you won’t have a problem giving this game your money and buying them all anyway, because as far as I can see it, you can never have enough plants! 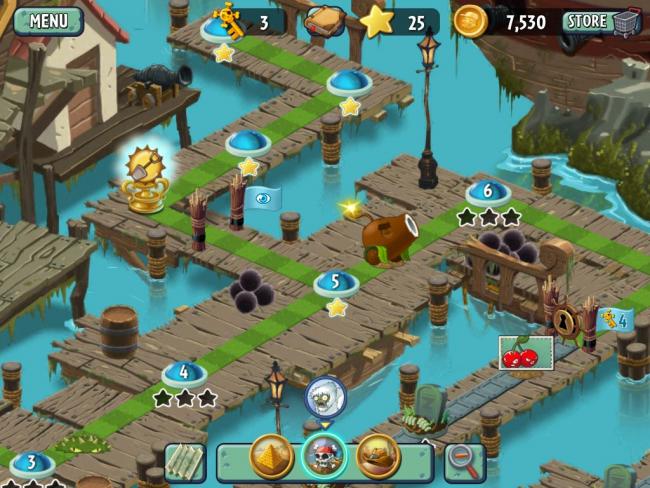 Other in-game currencies like coins are always in abundance, and mostly used for the touchscreen-exclusive power-ups that are also included in the game. When you find yourself in a real pinch, you can use a number of gesture-based superpowers to level the playing field, which work perfectly with the game’s responsive touchscreen controls. These superpowers include literally pinching zombies’ heads off with your fingers, flicking them up into the air and then flinging them off-screen, and dragging your finger across their bodies to administer a pretty devastating shock. It may seem like a cheap way to win at first, but trust me – once you get to some of those later levels in the challenging Wild West world you’re going to need them!

I first sat down to play Plants vs. Zombies 2: It’s About Time on a Friday afternoon. The next time I looked up, it was well into Sunday evening, and I had suddenly grown a big wooly beard on my face not unlike the beard on the grizzled Prospector Zombie. But that’s the funny thing about the game’s moniker: yes the game is literally about time travel, yes it’s about time that we finally got our hands on it, and yes there’s no finer way to spend your own time than by playing this game. Plants vs. Zombies 2 is everything you could have wanted, or expected, from the sequel to one of the greatest casual games of all time. It’s safe to say this one was well worth the wait, and then so much more.

Beatbuddy: Tale of the Guardians Review