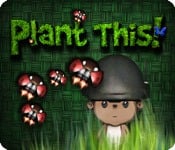 Tower defense games – simple tactical battles played out in real-time where you attempt to build a range of strategic roadblocks and turrets to guard against onrushing hordes – are hugely popular on home PCs. Plant This!, which despite its general lack of polish, comes correct where it counts most: Furiously addictive play. Capable of taxing both one’s wits and reflexes, it’s a great way to kill 15 minutes here and there without having to shift your brain completely into neutral.

Starting out, do yourself a favor – forget anything that has to do with the inexplicable storyline, chronicling a hyper-intelligent rodent’s attacks on mankind. As evidenced by the game’s subtitle (“Enter the wrath of Gopher!”), the whole setup’s a bit gonzo. It’s a point quickly reinforced by a presentation that’s composed from individual graphical elements of varying quality which have been inexplicably strung together.

So while music, character renders, animation, special effects and cartoon fonts may have you anticipating a first-rate run at playing armchair general, be aware. As evidenced by sub-par background visuals, amateurish speech samples (we can only presume the villain is voiced by one of the title’s programmers) and a clunky user-front end, the package clearly has its rough spots.

Curiously, these design hiccups carry through into the hands-on play experience itself. Mind you, the basic setup works well enough. Slugs, ants, beetles and other enemies all descend in waves from the top of the screen, with your goal being to prevent them from reaching the bottom. Any that successfully manage to do so detract from your limited pool of spare lives. On the playfield below – a garden filled with puddles, spare tires, logs and such – you’ve got free reign to plant or uproot flowers with a click of the mouse.

Given a limited supply of cash, used to purchase greenery, it’s up to you to construct a floral maze that both slows the advancing tide and gives varying types of plants the time and room they need to attack, clearing away encroaching enemies.

For example: Forcing creepy-crawlies to walk alongside a row of heat-shooting sunflowers is good, letting you quickly whittle their ranks. But making them march past daffodils, which stun or freeze them while roses or moonflowers inflict grievous close-quarters assaults, or a bed of daisies, capable of destroying weaker groups in rapid succession, is even better. What’s more, as long as you’ve got the spare loot (replenished instantly as enemies are slain), you can always rearrange or upgrade defenses as needed before, during or after each new wave of attacks.

As such, no matter which of multiple difficulty levels you play on, the action always feels challenging and fresh, especially as new twists such as larger playfields and tougher “boss” opponents are introduced. But the control scheme could use some improvement, as flowers must be individually placed, when it would’ve been much faster, and less frustrating, to quickly plot whole rows by dragging and dropping. Likewise, plants – whose damage, range and speed can be enhanced – must be individually selected, no matter how many you’ve got, when it’s time to upgrade or sell.

Managing the sheer amount of information you’ve got to process when combat starts may also prove overwhelming for beginners, especially when peripheral strategic elements are introduced. We’re all for the ability to stun moving bugs by planting flowers on top of them, and options to target individual opponents, e.g. special bugs that damage or freeze all nearby critters when destroyed. Still, at the speed the on-screen excitement moves, it’s no easy task for newcomers to wrap their head around everything in the midst of frantic engagements.

Even so, from collectible trophies to ongoing time/scenery changes and maze layouts which carry over between stages, eliminating the need to rebuild completely from scratch, the end product far exceeds the sum of its parts. Thank the designers’ obvious affection for the outing, as evidenced by the sheer amount of goodies to discover and left-field comic relief thrown in to help liven up the proceedings. Not everyone will get the joke, or appreciate quite what the title’s creators were going for. But those that do are in for a treat… and, while we’re at it, frantically good time.

If you liked this game, try Garden Defense.