Planet Diver Review: Not Quite Free-Fallin’ 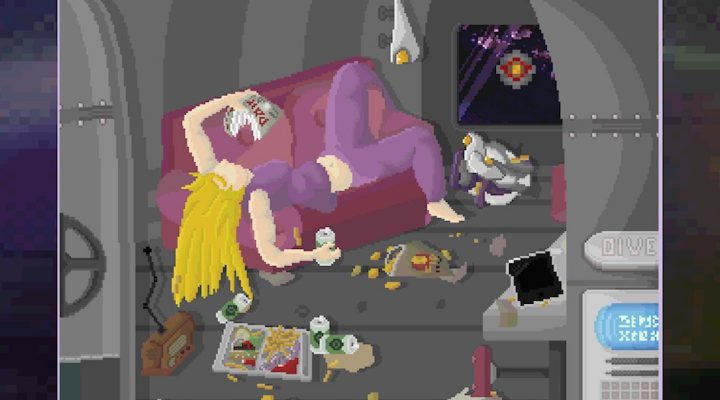 Controls are effective and easy to learn

The old-timey soundtrack is as fitting as it is absurd

Some transitions and pop-ups really get in the way

Has a lot of in-app purchases for a paid game

Planet Diver does a lot of things that I really, really like — but it also has a couple of significant problems. Personally I think it’s easy to shrug those problems off since the game is so straightforward and fun, but a lot of people won’t be as flexible — and I can totally understand why they’d take that stance, too.

Planet Diver is all about a thrillseeker going base jumping with a wingsuit. Only instead of leaping off of a building or cliff face, she’s plunging head-first through entire planets. It’s an interesting setup that doesn’t take itself too seriously, and comes out all the better for it. There are lots of bonuses to unlock, such as extra suits (with lots of cameos) or additional planets, and the soundtrack is pretty much perfect in how utterly wrong it is. Seriously, the music sounds like something you’d hear in a prohibition era speakeasy. But what I love about this detail is how it kind of makes sense. I can totally picture this daredevil jumping into volcanic caves while listening to something as carefree and old-timey as this. 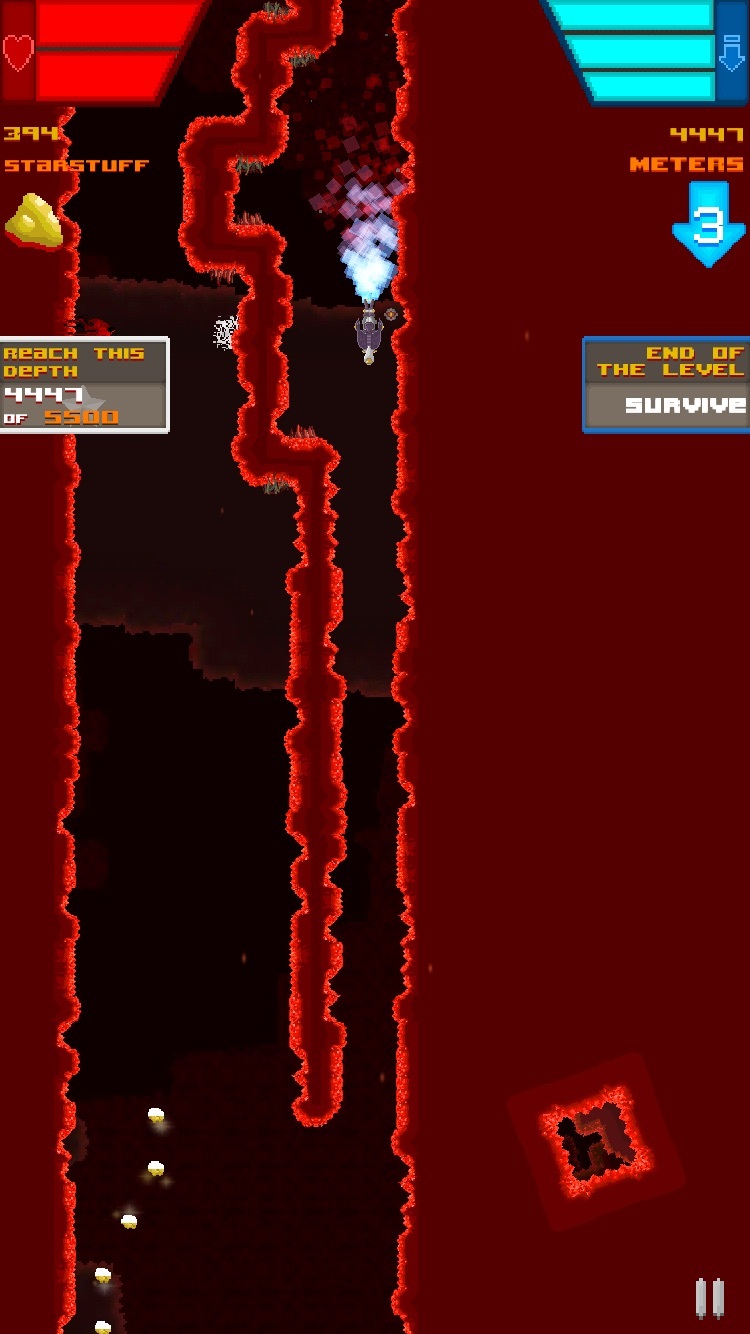 Actually diving through said planets will probably feel somewhat familiar to anyone who’s dabbled in pick-up-and-play arcade style mobile games before. It’s sort of endless, but not quite, since some levels have goals that require reaching a specific distance. Though you can usually opt to keep going just to see how far you can make it – or just play the Arcade mode, which is also a thing.

That is, assuming the obnoxious gameplay tips and biome transitions don’t get in the way. I understand the need to make sure players know what they’re doing, but why pause the action (almost always at a bad time, too) in order to have a tip pop up that was already talked about in the un-skippable dialog that we had to watch at the start of the level? And while I get the reasoning behind having the camera zoom in all ridiculously close to hide the shift to a new biome, it should zoom out a whole lot faster if it’s going to keep throwing stuff at me during the changeover.

The controls are pretty simple, with left and right swipes changing “lanes” in that direction, swiping down to build up speed (and potentially blast through some obstacles and enemies), and swiping up to slow down/perform a dodge maneuver. It’s really easy to learn since there are only four commands to worry about, but I do wish that there wasn’t any input lag between speeding up/slowing down. What I mean is it’s pretty easy to zip left and right, but when you start doing more complex stuff like slowing down and then immediately speeding up the commands don’t always go through. It’s not a huge problem for the most part, but it can get frustrating when you’re trying to pull off some fancy moves to earn a gold star.

Despite the slight input lag I do really like the speed up/slow down system that Planet Diver uses. If you play at a regular pace it’s not all that difficult to avoid most hazards and collect lots of the “Starstuff” you need in order to buy more goodies from the shop, but if you go faster you’ll earn a lot more Starstuff. This tradeoff is a great way to let players decide just how difficult they want each game to be, yet even the fastest setting still feels manageable if you’ve played reflex-based games before. 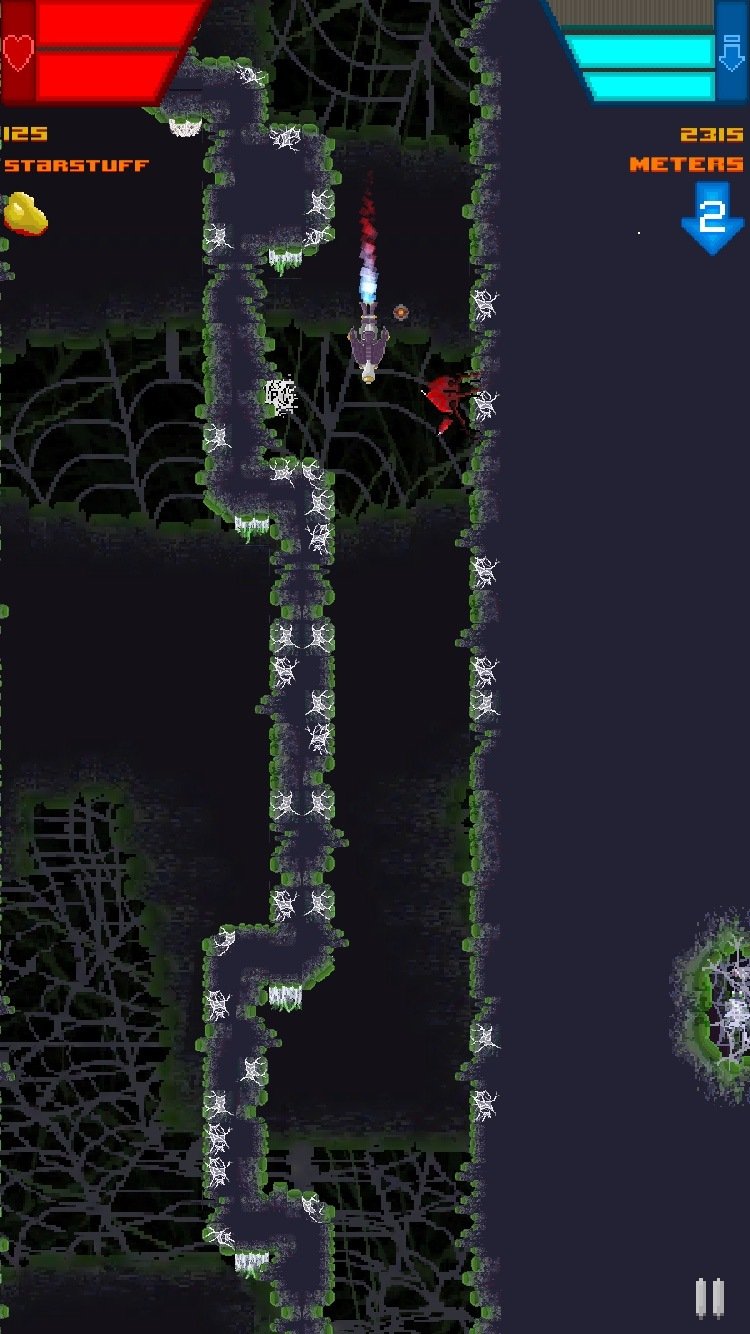 Honestly though, Planet Diver’s biggest disappointment is that it’s kind of structured like a free-to-play game, but it’s not free. In fact, the in-app purchases cost as much or more than the initial download ($1.99 for “Buy one get one free” in the shop, $2.99 for a permanent Starstuff doubler, and $4.99 to unlock everything in the shop). Even though you really don’t need to buy any of this stuff in order to have fun or even unlock content, it feels like a bit of a slap in the face to have it in a paid game like this.

Thankfully, all of those in-app purchases can be ignored so long as you’re willing to just dive into it and play (see what I did there?) And I do think it’s worth taking that initial plunge (I did it again!) Planet Diver is a fairly straightforward and stylish “endless” sort of game that’s perfectly enjoyable if you’re looking for something to eat up a few minutes here and there.