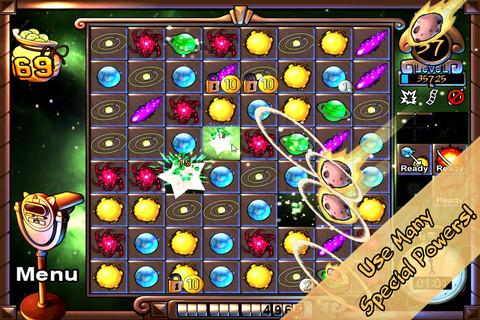 Match three games are a dime a dozen these days. That means that if you want to find a good one, you’ll likely have to slog through a lot of crud. Planet Buster, thankfully, is one of the gems that stands out from the muck, thanks to its goofy style and incredibly fun gameplay.

At its core, Planet Buster is a match-three game that’s set in space. Basically, you control a pirate who sails between worlds and … um… busts planets? Yeah, that’s pretty much it. The lack of story doesn’t really matter, because the theme/setting works just fine without it.

Instead of different colored objects/gems, the game’s boards are populated with different types of astronomical bodies. Planets, nebulas, and galaxies? Yes, they’re all here. Your goal is to rack up a certain number of points within an allotted amount of time in order to advance to the next level and — eventually — travel the stars and go to another planet that’s packed with yet more levels.

The main challenge that faces match-three games is that they need to be both addictive and fast-paced enough to retain players’ interest. Planet Buster has this down, cold. The time limits will often have you scrambling to rack up enough points to advance, and it’s not uncommon to find yourself killing over an hour at a time while you play.

The addictive nature of the game comes courtesy of a couple of Challenge areas and special abilities. The Challenge areas appear once or twice in each world, and you complete them by clearing the entire board with only one move. Each time you complete a challenge, you unlock an ability of your choice; like the explosion that will clear out large numbers of blocks or a meteor shower that will hit all the blocks of the same type or the score multiplier that makes it much easier to rack up the necessary points to beat a level. 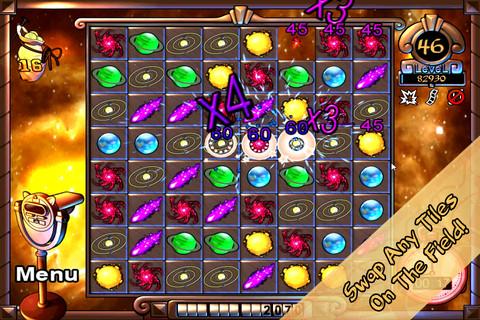 At first, getting through each stage is a relatively simple task, and it’s not too difficult to advance without using any of your abilities. The levels on later worlds start getting pretty tough, though, and you’ll often have to use the abilities all together in order to finish. Thankfully, you can buy power-ups and reset the abilities’ cool-down timers from the in-game store.

The game’s production values are actually magnificent. The colors are lovely and bright, while the different planets you find yourself shuttling between are beautifully illustrated, with maps that feel hand-drawn. The soundtrack, meanwhile, is pretty unique. The best way to describe the music is “space-age pirate,” which is about as goofy (and fun) as it sounds.

It should be noted that there is a noticeable issue with the game: Reliability. While the game managed to run without a hitch most of the time, it did crash on a couple of occasions during the review process. That said, this wasn’t a regular occurrence.

By and large, Planet Buster is incredibly well done. It looks and sounds great, the gameplay is addictive and fast-paced, and the general setting is charmingly ridiculous. Pick this up: You won’t be sorry you did.