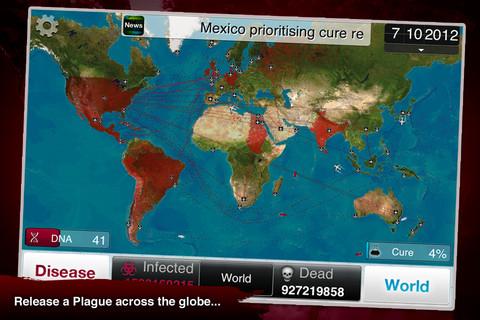 Wake up, gamers! It’s time to kill the whole world!

It starts simply enough. A slight rash or a minor cough. Not enough to take a sick day. But breeding deep within those victims is a new and dangerous viral infection. As they shake hands, handle money and talk to friends they’re spreading it around, and then those newly infected spread it around. Before anyone knows it, it’s too late. It’s running rampant now, and unfortunately the symptoms are getting worse. Paranoia, comas, total organ failure. In Plague Inc. this is considered a good thing.

It’s the point of Plague Inc. you see, to cultivate a plague to try and wipe out the human race. Not as a bio-terrorist or anything. It’s not a violent game (graphically anyway) since killing people is just represented as a number, you don’t see anything or take part in a direct way. Your only interaction with the game is to evolve your plague and to give it different abilities, symptoms or transmission enhancements.

You spend points to evolve it, so you can’t just do everything you want. You need to be choosy. Adding coughing as a symptom help spread infection, but also brings attention to itself. Transmission through livestock works great to spread in rural areas, through rodents works better for urban ones. You get the idea.

The whole experience plays out very academically. You’ll spend most of your game time staring at a map of the world, watching real-time updates as your virus runs its course. The rest of the time will be spent staring at charts and graphs to better see in detail what’s happening in a particular country, or other specific information. So if you’re looking for something bombastic or exciting visually, I’d keep looking.

While it may not really look like much, Plague Inc. is super compelling in a weird sort of way. As you evolve your virus and endow it with new abilities, you’ll watch countries on that map begin to get spotted with infections, until they turn a deep red. And if you planned correctly, those infections will bleed over the borders and run over neighboring areas. 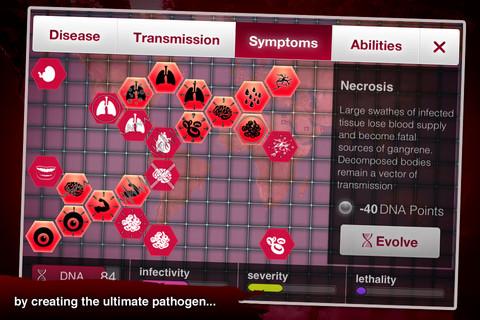 It’s slightly sick when you think about what you’re actually doing, but I’d be lying if I said it didn’t feel rewarding in a way. When I plan correctly and create a super infectious disease that takes a long time to kill its host (important, because if the virus kills quickly, then there’s no time for to spread that infection around), it feels awesome to watch those infections spread like wildfire.

The game really involved finding the perfect time to change the virus from infection to lethality. At some point, your virus will get found out during a normal check-up. Once that happens the cat is out of the bag so to speak. It’s a dangerous dance trying to slowly ramp up the severity of the disease to help it spread, without calling too much attention to it. Too aggressive and you scare the populace into trying harder to find a cure, which is bad (for you).

Once the worlds’ doctors begin to work on a cure then the race is on. You have a limited amount of time to kill off the entire population of Earth before the cure is found. There are ways to slow down the research for a cure, but really, once they start down that path you’ll want to just move into your endgame. 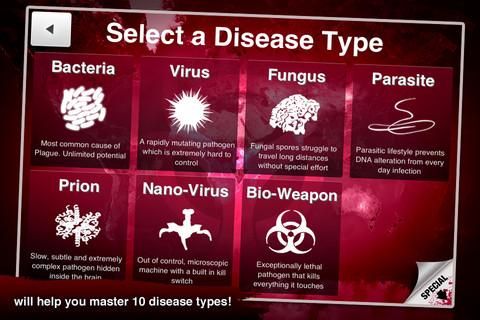 Unfortunately though, it wasn’t all plagues and contagions. The first few games were captivating, as I learned to slowly build up my virus before really kicking in the lethal endgame. But as I played more and more games of Plague Inc., I started to see a very definable pattern emerge.

Plague Inc. is simply a numbers game. If you can hold off discovery of your virus long enough, and get ahead of the cure meter… then you’re going to win. There are minor things you can do to change that, but not much. Not enough. Adding to that, the frequency of obstacles and their importance on the game is far too low.

I’d like to see the doctors researching a cure to make leaps during their research, or have setbacks – and the same should happen for my disease. I want to feel the push and pull involved in a great struggle like this. The good news is that I think an app update could potentially provide this, so long as the developers decide to go this route. It just needs some more worldwide events to come across that news ticker to keep the game fresh.

Don’t take this as a sign to not play Plague Inc. Far from it actually. The issues I had with the game revealed themselves because I played it a lot. I loved it and still do, and I’d readily recommend it to anyone. I only complain because I see a good game, but I know with some minor tweaks it can be great.