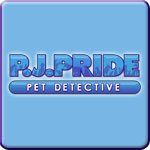 Something about animals compels us to fawn over them. PJ Pride: Pet Detective contains plenty of adorable dogs and cats as well as unusual pets like the iguana, monkey, wallaby, and others that aren’t so endearing. This hidden object game is a horse of a different color as its story uses hand-drawn illustrations with photo-like scenes for the hidden object portion.

Inspired by her cat, Meatball, PJ quits her company job to open "PJ Pride Animal Shelter and Pet Location Services." Not long after she opens the store, owners report their pets have gone missing. PJ thinks something’s fishy and that the new cosmetic factory opening at the same time is no coincidence.

The title of the game implies there is detective work, but the second part of PJ’s store’s name – "Pet Location Services" – reflects the game more accurately. Rather than hunting for clues, she explores Brookdale to look for hidden objects that the game calls clues (but that really aren’t). A missing pet will scurry across the screen, play hide and seek, or wander around for PJ to rescue. A hidden object comes in handy on occasion when PJ picks it up causing the missing animal to appear.

The hidden object game is standard except for one thing: missing animals don’t always show up in the list of hidden objects that need finding. Once a missing animal emerges, the game adds the animal to the list. After PJ catches the pet – a satisfying feeling that keeps you quacking – the rescued animal and owner reunite the next time there’s a cut scene.

Players begin the game with five hints per level and the number goes up as they finish more levels. The clock’s time also increases with progress.

PJ Pride: Pet Detective hides the objects with the right amount of challenge – neither too easy nor impossible. As players conquer levels, the number of scenes and objects increase in subsequent levels. Be ready for the occasional surprise after clicking on an object. It’s nothing scary or bad – just different. Here’s an example: click on the boom box and it starts rockin’. Click again and it stops and goes away. Adding even more interaction with hidden objects and their scenes would turn the game into the cat’s meow.

As for precise clicking (a frequent issue of hidden object games), a player can click the right object and the game punishes by cutting the time on the clock. For small or thin objects, it’s about 50/50. In some cases, the game easily recognizes the click and in others, it steals your time.

This one is strict about random or incorrect clicks. It almost always penalizes for missed clicks even when you’re trying to catch a fast moving animal. Also, the name of the item and the actual item frustrates at times. In some cases, the object looks nothing like what you expect. In other cases, you feel cheated based on what appears on the scene.

In the mini-games, players either reassemble a flyer that Meatball shredded or match pets in the shelter with the flyers in a "half" Memory card game. Rather than picking two cards to find matches, the flyer shows and players click one of the cages looking for the matching animal. Jigsaw puzzles and Memory mini-games are overused in the hidden object genre, but the twist provides a welcome change.

You also have the option of playing in timed or relaxed mode. Though it isn’t necessary to have another game mode available, the game could probably have done something creative with the animals to create another interesting game mode.

The unique hand-drawn illustrations are one of the game’s strong suits, and it would’ve been nice to see the same style applied for the whole game not just the story. It would make the game more seamless.

As for complaints: although the game has a good story, there isn’t a way to skip or speed through it. Furthermore, when re-playing a scene, the list of objects to find doesn’t change. It’s the same objects every time and they’re in the same place. Both of these will make a player less likely to play the game again. However, 96 scenes to explore, 90 pets to find, and 20 levels to climb make up for the game’s lack of re-playability.

We would have also been inclined to score the game higher if not for some apparently sloppy game design mistakes and/or bugs, the most serious of which is a glitch that doesn’t allow you to save your game. [Editor’s note: this glitch appears to have been fixed when you download the most recent version of the game from iWin.]

And say that we would have been scored better if not for some apparent sloppy design mistakes and/or bugs. They got the big things right — the clever theme, the high production values (hand drawn…) but missed the small stuff. But those impact the game.

From a bird’s eye view, PJ Pride: Pet Detective mixes a dash of originality with an enjoyable story to make it a bright addition to the hidden object genre.