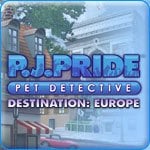 Polly Pride, her cat Meatball and her neice Ashley arrive for a European vacation to find that animals have escaped the circus. Of course, it’s a job for Polly Pride (now better known as PJ), Pet Detective. Like the previous game, Polly Pride Pet Detective, Polly’s job is to hunt down the animals. However, in PJ Pride Pet Detective: Destination Europe, she also relies on clues to help her solve the mystery of who let the animals out that are now running around the streets of Antwerp, Brussels, Luxembourg and Paris.

PJ Pride Pet Detective returns to hidden object roots with no real mini-games. Every level contains four scenes with 10 hidden items each. Levels also hold clues that come in handy later between levels as they help PJ and Ashley figure out what’s going on as they work the case.

The story goes into depth and introduces many characters from the circus. If you slip up and miss part of the story, you can review it when you finish the next level. However, only the last part of the story is reviewed and nothing prior. It’d help to let players review the entire story with buttons to jump around.

At the end of the level, players can also review Clues and Recovered Animals. Clues show the items you’ve collected from the scenes that receive a clue classification. They help solve the mystery. Some clues may take several levels before you can put together and some work alone.

Recovered Animals shows all the animals and boxes under each indicating the number of animals of that kind. But the game never explains the difference between red and black checkboxes. At least two animals appear in every scene. You must click them to catch them. The red checks could mean missed animals, but testing the theory proves it wrong.

You innocently try to click a quick moving animal, wait a few seconds, and click an object that you think appears in the list only to receive the annoying “Careful Now!” message. Clicks are not precise as the game doesn’t recognize clicked items on occasion. Some animals just sneak by and the game doesn’t give it to you if you click around it.

The game hides items with fair sleight of hand. For example, a diamond appears in a car’s headlight looking like a perfect blend. A tomato almost disappears inside of a red train flasher. However, some objects are difficult to see that even using a hint, you still can’t make out the object.

PJ Pride Pet Detective: Destination Europe also prevents hidden object pros from relying on color too much. Many items appear in monochrome against the walls, ceilings or on objects. On occasion, the game gives you color clues such as black gloves, a green grape or black olive. Even with the given color hints, don’t expect to be quick to find the objects.

A couple of times, more than one object in the scene could qualify as an item on the list. For example, “wagon” shows both a child’s red wagon and a covered wagon. In another case, “black glove” doesn’t accept a black glove that has a yellow and black glove on top of it.

The scenes repeat, but they contain so many objects that you’d have to play the game many times to recognize them all. Sometimes you remember an object from before and others you won’t. Amazingly, you rarely have to find an object more than once or twice in the same scene.

As for hints, every level comes with eight hints and no clock. It truly compels players to take their time with the game and relish the play. Players who want more challenge can set a goal use no more than three hints or whatever. Maybe it would be better to offer a timed and relaxed mode. But instead of stressing people with a ticking clock, the game uses subtle animations to trick them. One minute they’re animation and another you think an animal scurries across the scene.

The graphics in the hidden object portion of the game look less photographish than Polly Pride Pet Detective. The original like this one has superb story drawings, but its scenes didn’t match that style. PJ Pride’s are an improvement as you can hardly tell if they’re photographs or hand-drawn. However, the scenes don’t give much of a European feel aside from signs saying “Luxembourg” or “Avril 16” (April 16 in French).

The music sounds like upbeat classical music that changes its style every couple of minutes. As usual, players have control over audio and can do as they prefer. The clues part of the game prevents it from turning monotonous, but it doesn’t offer a lot to do as players can just move clues until something happens. Replaying the game just rehashes the same things and points to objects already found in the first go-round.

Fans missing pure hidden object games get exactly that with PJ Pride Pet Detective: Destination Europe along with plenty of challenges and an intriguing story to go with it. The game won’t turn away novices because it has no timer and offers a decent amount of hints. To boot, the game provides an ending that satisfies and lasts long by today’s ending standards. No matter how you feel about the circus, this entertains.