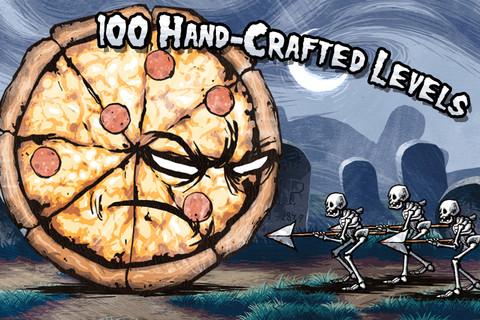 Pizza vs Skeletons is one of the strangest games you’ll ever play, and also one of the most fun.

Pizza vs. Skeletons is one of the weirdest, most cobbled together titles I have ever seen, and I’m loving every moment of it. The entire experience boils down to little more than a random mash-up of mini-games, but the result is incredibly, ridiculously entertaining. This is a game you absolutely have to try, if for no other reason than to laugh at the sheer absurdity of it all.

There’s no real plot to speak of in Pizza vs. Skeletons. Basically a bunch of boney baddies are wreaking havoc and the only way to stop them is with the power of a giant wheel of sauce, bread, cheese and toppings. Honestly, it’s best if you don’t think too hard about it and just sit back and enjoy the ride.

The game offers a wonderful assortment of short levels, each of which have their own quirky hook. In one stage you may find yourself rolling through a bombed-out city looking for lost puppies, in another your pizza turns into a wrecking ball and must smash the walls of two buildings while furious skeletons throw bones and baseballs at you. Still other stages resemble the Feeding Frenzy franchise, but with pizza slices and skeleton fish. Just when you think you’ve seen every possible twist and turn the game can take, yet another weird stage is tossed in, keeping things interesting even into the latter stages.

A still more impressive feat is that not only are the different stages diverse enough to continually feel fresh, but nearly all of them are a blast to play. Of the 100 available stages, the vast majority of them are enough fun to play over and over again without ever getting stale (sorry, no pun intended). Really, the only levels where the game falters are the boss stages, which consist of a sumo wrestling match against a skull of equal size to your pizza. The game’s normally fast pace grinds to a halt in these levels, and often winning is more a matter of luck and an AI hiccup than any discernible player skill. Aside from those levels, and a few ho-hum arena stages, the rest of the game absolutely shines.

Pizza vs. Skeletons also manages to make great use of tilt controls and taps, requiring players to rotate their device this way and that to get the pizza rolling and tapping on the screen to jump and slam down on the ground. Even though the tilt controls lack pinpoint precision, they still do a great job compared to a lot of iOS offerings. Most importantly, the control scheme is tight enough that it never feels like they game has somehow cheated you into failure. Your shortcomings are always due to poor strategy or execution rather than a broken game.

If you happen to be some sort of heathen who doesn’t like pizza, the game provides so many customization options that the protagonist can ultimately become just about anything you like. Want to create a giant jellyfish with a powdered wig and 8-bit eyes? Done. Or would you prefer a mohawk-sporting tire covered in beetles? The options are just as outrageous at the game itself, and the built-in social media integration means you can easily share your abominations/beautiful creations with friends and loved ones.

It’s really hard to convey just how strange and wonderful a game Pizza vs. Skeletons truly is. All you really need to do is check out the first 10 levels via the free version and I all but guarantee you’ll be hooked. Even better, all your progress in the trial transfers over to the full game, so you don’t even have to replay the levels you’ve already beaten. Of course, you WILL replay the levels because they’re that entertaining, but you don’t HAVE to. Look, do I have to spell it out for you? Fine, go get this game right now, it’s brilliant.

Realm of the Mad God Review