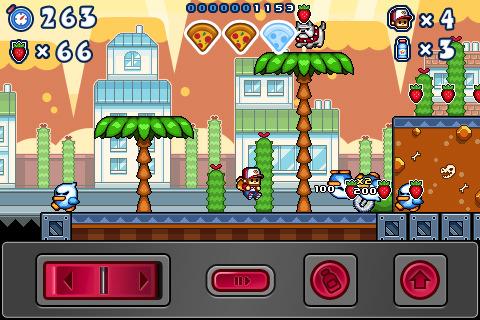 Being an Italian stereotype in the videogame world is apparently rife with danger, adventure and reward… but mostly danger. Sometimes there’s a princess to rescue, but most of the time it just seems you’re dodging something trying to kill you and returning the favor by jumping on their heads. As an Italian I’m going to let you in on a little secret, this actually isn’t a stereotype. This is how we live our lives every day!

Luckily the source of the game’s Italian stereotyping is a good one – Super Mario Bros. Pizza Boy is in no small way an homage to the classic title that only days ago turned 25 years old. Pizza Boy has all the same elements of the Super Mario Bros. games, just updated and brought to the iPhone. You play as a Pizza Boy who was trying to make a delivery when the pizza was stolen by a bird and carried off! The story line is super goofy and definitely plays into the style of the game. The game then has you chasing down said bird through three different worlds and twelve levels.

The game is essentially a platformer where you’re running around avoiding obstacles and jumping on enemies heads to kill them. You’ll collect strawberries instead of coins and throw milk jars instead of fireballs. At times it feels like Super Mario with a different skin on it. I don’t mean that as a bad thing, actually quite the opposite. After all, if you’re going to copy an old game, it might as well be a classic.

The controls for the game are pretty simple even though I’ve never been a huge fan of virtual buttons or controllers. Luckily the game doesn’t just draw the controls on the screen where ever you put your thumbs. There’s a section of the screen at the bottom that has buttons for jumping and throwing, as well as a rocker switch to move left and right. It’s not perfect, but I definitely prefer this over having to put my fingers on top of the action and have my view partially blocked. It’s also worth mentioning that these controls were more responsive than most other virtual button games I’ve played.

Sadly the game does have a few flaws. They don’t ruin the experience, but definitely leave it a bit tarnished. Because of the touch screen controls it’s hard to be ultra precise, which is sometimes required when jumping from platform to platform. That alone isn’t a huge deal, but the game has no checkpoints during the level, so when you die you start all the way back at the beginning which can be pretty frustrating. 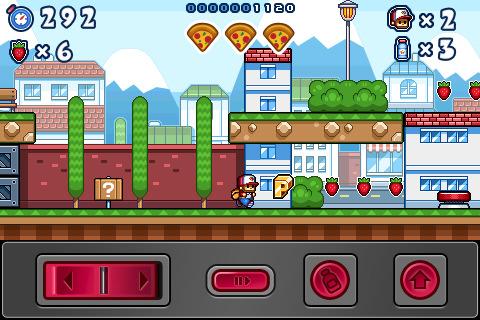 The other issue is the lack of continues. If you run out of guys there’s no way to continue your progress, you have to start over from the beginning. While it’s true this was how games were made back in the Super Mario days, we’ve certainly come a long way since then in regards to checkpoints and continues, and I really feel like they both should’ve been included here.

Pizza Boy feels like a love letter to the old platformer classics, and it certainly plays like one. With the 25th anniversary of Super Mario Bros. just passing it seems a perfect time to remind ourselves what made that gameplay so timeless. Pizza Boy boasts nice sharp retro style graphics and music complete a package that is extraordinarily fun despite a few flaws.