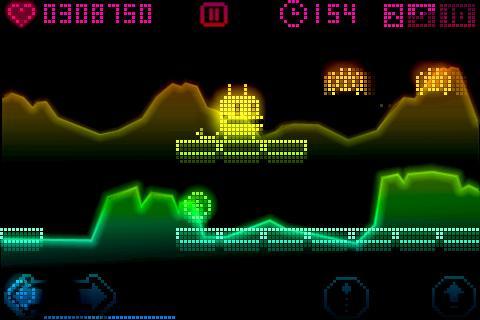 As we march forward into the high definition, 3D age, with smartphones that can do more than Star Trek imagined years ago, there’s a faction out there that’s trying to cling to the past. Bulkypix and Pastagames have teamed up to bring the ultimate retro-styled arcade game to your iPhone, Pix’n Love Rush.

If you like old school retro games and are familiar with some history, you’ll appreciate what’s going on here. If not, you might be left scratching your head, so I’ll try to fill you in. The creators of Pix’n Love Rush have a series of books about old arcades, the history of Nintendo – which will play a role in Pix’n Love Rush later – so these guys know what they’re talking about. Basically, they tried to distill all the old experiences you may have had in the past and put it in one, slightly parodying game.

The gameplay in Pix’n Love Rush couldn’t be much simpler. You play some sort of monster who can run left or right, spit a projectile to defeat enemies or jump using buttons along the bottom of the screen. Your only goal is to survive and get the highest score possible. To get a higher score, defeat bats with your… erm, spit, as well as collect plus-shaped icons. The more you collect and defeat in a row, the higher your combo meter gets. If you do well enough, the point values increase and the graphics and sound change.

However if you fall, get hit by an enemy, shoot something you shouldn’t (or even hit yourself as the projectile falls!), you instantly drop down one combo level. For a lot of players, this kind of punishment will seem severe, and it is. But know that it is a part of the old-school vibe and feel that’s inescapable here.

Adding to this feel are the graphics and sound. Everything is pixilated, from the characters and icons to the “chiptunes” (computer-generated music that sounds like those old videogame consoles you have collecting dust in your basement). If you know your history, the graphical and sound changes will make you laugh. 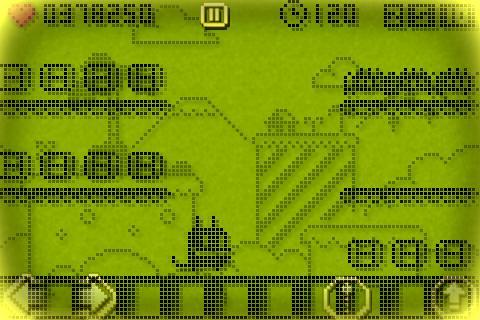 At first, the characters are white and yellow pixels against a grid on a black background. When you hit the “Combo x 2” level, everything turns into what looks like white pixels against a painted background. This is a take-off of the very first home videogame console, the Magnavox Odyssey (a system that forced you to put transparent acetate over your screen and bright lights from the TV screen moved underneath). The “Combo x 5” becomes what looks like Nintendo’s literal red-headed stepchild, the Virtual Boy (a black-and-red virtual reality system that was so awful only 14 games were ever made for it, along with a health warning for people under 14 not to play it!). Finally the pinnacle of combo-making, the “Combo x 10” is the original monochrome Game Boy.

So why all this history laid out for you? Because quite honestly, unless you are a huge videogame buff/nerd, you probably wouldn’t get why the “joke” of the game is so funny. Pix’n Love Rush is all about reverence in its simple gameplay, and it has the aesthetics to match. 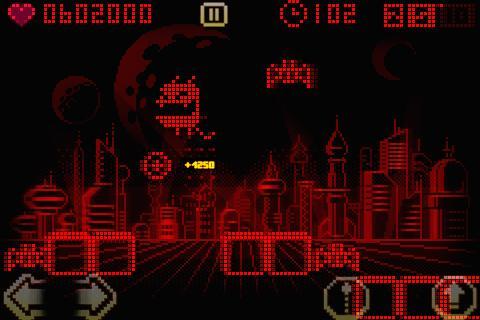 Pix’n Love Rush has that wonderful old time “just one more try!” hook to it. An attempt that ended with me losing my last bit of health with four seconds to go followed by a fervent restarting of the game shows that you won’t let this game conquer you — you will conquer it!

Rounding out the value here is the inclusion of OpenFeint leaderboards and achievements. Being able to have bragging rights is what old-school gaming is all about. Having this on a global scale is icing on a deliciously retro cake.

If you were a gamer back in the 1980s, then picking up Pix’n Love Rush is a no-brainer. If you weren’t a part of that culture, however, download Pix’n Love Rush anyway. It’s a wonderful package that gives you a taste of where all this gaming stuff comes from, and you’ll have a great arcade game to play at the same time.