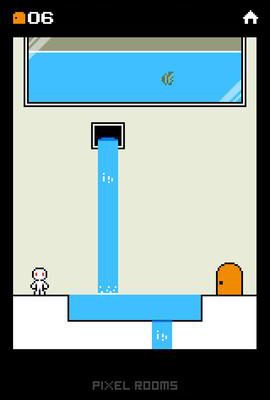 There’s an almost admirably masochistic aura around players who plow through room escape games like 100 Floors or DOOORS.  While some of their levels require creative thinking to reach discernible solutions, many end up feeling like a slideshow of designer dream logic mixed with gyroscope gimmickry.  Pixel Rooms avoids this pain point by featuring truly intuitive puzzles, but ends too quickly to leave its mark on the genre.

Although first-person has become the standard viewpoint for escape games, Pixel Rooms asks that you help the generically man-shaped Mr. Pixel—”a mysterious organism who exists to escape from puzzling rooms!”—find his way to the exit of each stage.  Both Mr. Pixel and the brown exit door will begin every stage in a new location.  Your job is to create an unobstructed path to the door that Mr. Pixel will follow, and open the door itself since Mr. Pixel does not have thumbs. 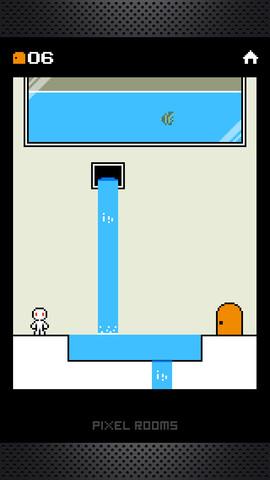 These tasks will sometimes require finding a key or trick to open the door, but often the door will open with a single tap, placing the focus on Mr. Pixel maneuvering.  Most stages feature a single priority, like assembling a ladder to access an out-of-reach door or draining a pool that is blocking Mr. Pixel’s path.  Many do contain surrealistic requirements—like making snow fall on the black doorway so it’s highlighted against the white—but these make sense in the context of their stage and rarely feel like huge logical leaps.

Pixel Rooms also contains the inevitable use of mobile motion sensors, although its place in solutions is both rare and valid.  You might need to get the gravitationally-inclined Mr. Pixel onto the ceiling or create an explosion of giant fizzy soda.  Just like the game’s item interactions, the need to move your device might be surreal, but it’s never nonsensical.

This results in a set of puzzles that feel easier than most of its contemporaries, but are still a rewarding treat to complete.  The inclusion of retro chiptune sound effects and occasional music—like when operating a claw machine crane to carry Mr. Pixel—add a lot to an otherwise simple experience.  Speedrun mode, which is unlocked upon completing all 25 levels, provides leaderboard incentive to replay the game in top form. 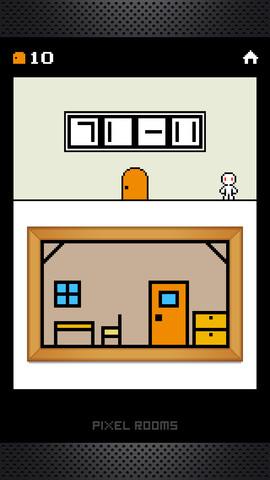 Of course, even outside of a speedrun, Pixel Rooms will not take long to complete.  As an admittedly terrible room escaper—anyone who’s solved 100 Floors without any guidance has my utmost respect—I made it through Pixel Rooms‘ 25 levels on my first try in 16 minutes.  Speedruns will average 3-5 minutes, especially since only a few stages feature randomized codes or solutions that will change each playthrough.  Once you’ve solved a room, even with a randomized code, you still know the solution and the repeatable challenge is merely how fast you can tap.

Pixel Rooms is a free app, though, and it’s completely free without in-app purchases.  You’ll have to put up with banner ads at the bottom of the screen and constant encouragement to try Urara-Work’s other games, but neither of these overly detracts from the experience.  We can only hope additional levels or purchasable level packs are added in a future update, since Pixel Rooms feels more like a highly polished demo in its current state.  It’s an experience worth both expanding upon and trying out, whether you’re a room escape expert or just a fan of helping pixelated men get wherever they’re going.