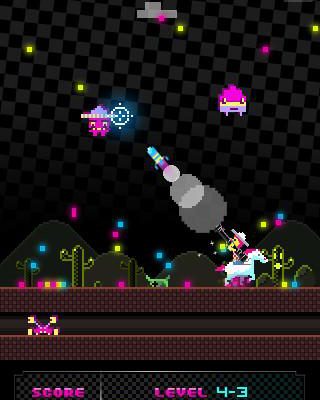 In its original incarnation, Pixel Ranger was one of those games that I nursed a quiet addiction to for months. A Facebook game offering level after level or endless twitch shooting, all wrapped in a glowing retro style, it seemed as though Pixel Ranger was custom-made for my sensibilities. Now, a few years later, the game has made its way to the iPhone courtesy of Chillingo and the game’s original developer, MetroGames. But not everything in the Wild West is as it once was.

The basics in Pixel Ranger are simple, yet wonderfully addictive. Players will control a cowboy who has a limited amount of ammunition. He’ll aim his gun skywards and attempt to shoot down scary alien creatures. When he does his targets will burst into a shower of pixels, which the player will then collect and add to his dwindling ammunition pile.

The gameplay in this mobile incarnation is exactly what you’d expect if you’ve played its Facebook brethren, but here the controls have been adapted to take advantage of the unique capabilities of the iPhone. For example, while the original version had players control movement with the keyboard and shooting with the mouse, the iPhone version will see players tilting to control movement and tapping where they’d like the little ranger to shoot.

For the most part these new controls work pretty well. The only real sore spot is in the jumping mechanic. To jump, you’ll need to tap near the bottom of the screen. And while it technically works without error, it’s just too difficult to balance tilting, shooting, and jumping all at once. What’s more, you’ll often find yourself shooting when you mean to jump, resulting in a mean ol’ critter running into your feet and dishing out a bit of punishment. After awhile it just became easier to shoot ground-based creatures than try to avoid them.

The controls aren’t the only thing that’s new in the mobile version of Pixel Ranger. In fact, the whole structure of the game is different. While the original offered only the simplest sense of level progression, the experience here has been upgraded and polished for the iPhone. Players will now play through 12 different chapters, each comprised of four levels. Should you dies after completing any chapter, you’ll be able to pick up the game at the first stage of the next one. It’s a far cry from the “three tries and you’re back on stage one” formula of the original. In addition, the game also offers an endless mode that’ll keep you firing in the sky for as long as you can, until you run out of bullets. 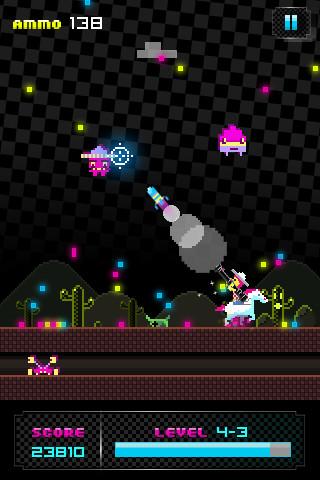 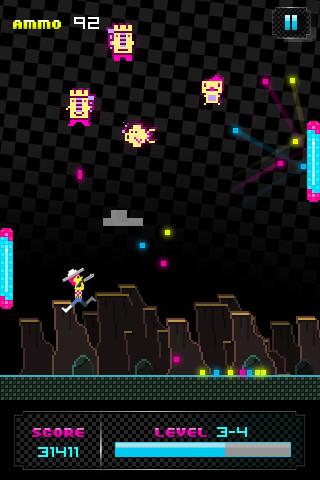 Like the original the presentation here is spot on. There’s a cool DayGlo pixelated art style, a catchy carnival music meets 80’s arcade score – but again, we’re seeing a ton of improvement here from the preceding version. Enemies and settings feature a touch more detail, the soundtrack offers more variety; this is evolution in every sense of the word.

Pixel Ranger has been a blast to play for a few years now, and this new iPhone version is no exception. Even better, though, is that Pixel Ranger on the iPhone ends up feeling more like a sequel than a simple adaptation. There’s more structure, more power-ups, more modes – more of everything. The controls take some getting used to, and the jumping leaves a lot to be desired, but even with its few flaws, Pixel Ranger is a release that no twitch gamer will want to miss.