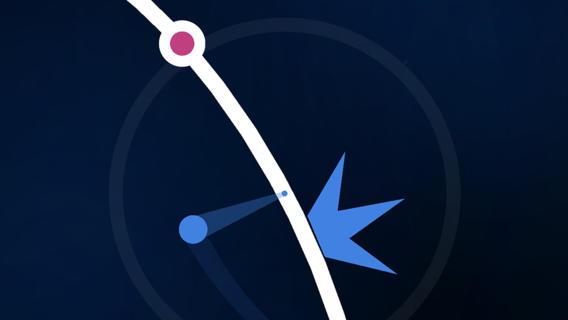 Whitaker Trebella knows how to make a stylish game. His first release, Polymer, was a perfect blend of style and substance. But his sophomore effort Pivvot has a problem: It has plenty of one, and not quite enough of the other.

The object of the game is simple enough: Travelling along a line that dips and curves, players will pivot their marker left and right to avoid obstacles. The game alternates between two types of play as you progress; one that teaches you how to overcome a new obstacle, and one that strings all of the previous obstacles together in a random order. Types A and B repeat a handful of times, coming to an end once all of the obstacles have been introduced.

It’s a simple concept, and one that could have been devilishly challenging if designed with challenge in mind. But Pivvot doesn’t come across that way. The only times I met with failure were because I was encountering an obstacle for the first time or because I touched left when I meant right.

Outside of this initial mode (dubbed Voyage) there’s an Endless mode that offers a bit more challenge, expert modes of both of Voyage and Endless, and something called “Berzerk” that I’ve yet to unlock. I suppose my not having unlocked it speaks to the game’s difficulty in a kinder tone that I have so far (as well as to its replay value), but it still doesn’t present that nail-biting, edge of your seat challenge that you might be expecting. On paper, Pivvot looks like it could be the next Super Hexagon. If you were thinking the same, you’ll want to curb those expectations.

Style over substance isn’t necessarily the worst thing you can say about a game, especially when it looks and sounds as good as Pivvot does. The game presents clean lines and simple shapes in a sleek minimalist style, all backed by a soundtrack that gives the gameplay a rhythmic feel without ever really defining itself as rhythm gameplay.

The great music doesn’t come as much of a surprise. Before developing his own games, Trebella provided aural accompaniment for a variety of titles, from Tilt to Live to Velocispider. As you might have guessed, the music in Pivvot is worth the price of admission alone.

That sentiment speaks volumes about my thoughts on Pivvot. Taken as a game, Pivvot lack the edge-of-your-seat challenge I’d hoped to find here. Taken as an experience, Pivvot is a trippy, hypnotic ride that’s perfectly suited to a touch device. Whether or not you’ll enjoy Pivvot is largely dependent on what you’re expecting from it. If you’re in the mood for hypnotic rather than hyperactive, consider Pivvot money well spent.