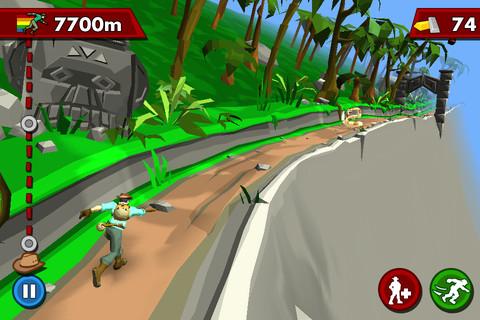 An addictive, if a little unoriginal, installment to the beloved franchise

There’s a big of irony to be had with Activision’s new Pitfall! title. The original side-scrolling Pitfall put Activision on the map as one of the most popular games on the Atari 2600. Its incredible success spawned an endless pool of arcade and computer clones. Now that jungle adventurer Pitfall Harry is returning for a grand 30th anniversary, it seems a little odd that he’d be coming back in a clone of his own.

No matter which way you look at it, this new Pitfall! could not have existed without Imangi’s Temple Run as a foundation. Both titles are endless runners that feature the exact same control scheme: slide up and down to slide and jump, slide right and left to hug corners and turn. Tilting the device left and right allows you to shift and collect a slew of floating currency, which makes a quick tone that rises in pitch as you collect pieces consecutively. Pitfall! does add the ability to tap the screen and whip oncoming enemies, but it’s a trivial addition at best.

Pitfall! isn’t the first title to use Temple Run as its major framework, but it does offer one thing that most other imitators have failed to introduce: active presentation. From the ingenious HD-yet-minimally-detailed “retro” art style to the game’s multiple camera angles while you play, Activision’s title is no doubt more thrilling and impressive than it’s source content.

Keeping up with the game’s high-tension action are a variety of different modes during your runs. Some areas might pan out in order to reveal a traditional side-scrolling style, while others invoke new methods of transportation entirely. Riding on a mine cart and motorcycle might not differ too much from the game’s core gameplay, but it’s definitely thrilling. Combined with the epic musical score, Pitfall! succeeds in creating a runner that makes you feel like you’re running with purpose.

One of the most frustrating aspects of Pitfall! Is the fact that it clearly wants your money (or more of it, anyways, considering the app isn’t free in the first place right now). he biggest attempt to grab your cash comes from the alluring (but frustrating) checkpoints and Macaw tokens. Every 2,000 meters you travel, you’ll unlock a purchasable checkpoint that will allow you to start your adventure from that spot. After shelling out some pretty high premiums in the form of diamonds, you’ll unlock the checkpoint. However, in order to respawn from said checkpoint, you’ll also need to purchase Macaw tokens for each attempt. It drains your cash fast, and the game constantly hounds you to make a purchase if you decide not to buy into things. 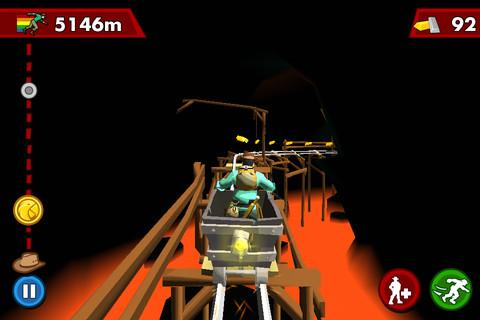 Aside from this flawed and frustrating system, the game’s other upgrades are a little underwhelming. One of the best parts of Temple Run was the ability to work hard for upgrades that constantly aided your performance. Almost all upgrades available in Pitfall!, on the other hand, are single-use. Once you’ve used up your supply of powers, it’s back to square one – either grinding for more currency or shelling out real-life dollars.

In the end, I can’t definitively recommend Pitfall! over the free game that it imitates, but it definitely adds a few new things to the mix that are worth noting. If you’re looking for a 3D runner with a distinctive visual style and thrilling level design, Pitfall! will more than satisfy. However, with an upgrades system that proves to be more frustrating than fun, I can’t help but feel that Activision missed a huge opportunity to place itself as the absolute “best 3D runner on the App Store”.