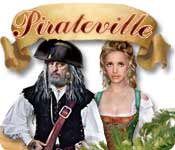 I’ve never understood the allure of the pirate’s life. With the freedom of sailing the open seas come hunger, smelly shipmates and months of chasing treasure that might not exist. But I must be in the minority, as the popularity of movies and other entertainment products featuring yellow-toothed buccaneers suggest. That’s good news for Nevosoft, who have released Pirateville, a seek-and-find game in which you play a handsome pirate with a weakness for gold.

The protagonist, Sharpshooter Jack, doesn’t so much set sail for adventure as stumble upon it while shopping for spirits. In order to solve a mystery surrounding a locked box, Jack travels to various locations, speaking with non-player characters and gathering clues that edge him closer to a big reveal at the end. Some of the locations you’ll visit include a shabby coastal shop, a fortune teller’s spooky quarters, the untidy room where Jack is staying and more. Along the way, you’ll encounter an old associate, a former lover, a shop owner, a ghost and other characters, all of which have a purpose in the overall story.

If you’ve played Mysteryville by Nevosoft, you know the drill. Each of the game’s 33 stages features a succession of individual tasks, all of which must be completed within a certain amount of time. Unlike the first object hunting games to hit the market, you’ll do more than scour the screen for items, although that’s one of the challenges you’ll run into; from time to time, you’ll also be asked to spot the differences between two pictures, and you’ll have several opportunities to play an assortment of mini-games.

What makes Pirateville engaging is the manner in which it folds these familiar activities into its storyline. For example, in one scene, I entered a shop to receive payment from the owner for services rendered. The problem was, an associate had torn the ledger sheet on which the information regarding the payment was recorded, and the proprietor needed my assistance assembling them. After I’d completed the mini-game, the owner asked me to help him find his abacus so he could calculate the sum of the payment, so he gave me a list of things under which to look. Next, the crafty businessman needed my assistance finding his ink pot so he could record the transaction, only he wanted me to clean up his store first. Instead of giving me a list of things to locate, however, he provided a series of silhouettes that matched the shapes of the items I was to find.

Just when I thought I was about to get paid, my efforts to find the ink pot failed as part of the story, so I had to look for it again. What I found funny was that all of the objects I’d picked up were back in place, which rendered the assignment to clean up the shop pointless. Regardless, I pressed on, going from a list of things under which the ink pot might reside. After finding the elusive container, the shop owner invited me to stay for squid stew, only I had to locate 12 spoons partygoers the night before had scattered across the place. So, while the level progression in Pirateville could be tighter – why ask me to look for things I won’t find? – at least I was able to perform a variety of tasks.

The interface in Pirateville is simple, which makes it easy to get started. If you’re having trouble finding something, clicking on the “Tip” button at the top of the screen reveals the location of one item. Although the 90 second wait between hints seem interminable if you’re stuck, it’s better than clicking on random things, as too many missed clicks results in a penalty that shaves 20 seconds off the clock. A timer and a button that will remind you of your current goal can also be located at the top of the screen.

The button for which I’m the most grateful, however, is “Skip Conversation.” While you’ll understand Jack’s motivations better if you read the dialogue, the exchanges contain so much excessive discourse, my guess is most players will bypass the chit-chat. What’s more, the English translation is horrendous in places, resulting in unintentional hilarity. In one scene, a fortune teller asks Jack, “Who’s is it?” instead of “Who’s there?” I guess the appropriate reply would be, “It’s is me.”

Complaints about the dialogue aside, Pirateville is a worthy addition to the hidden object genre. There’s no shortage of seek-’em-ups, and we’ve seen this kind of gameplay in dozens of offerings, but an undeniable spirit of fun and adventure comes through while you’re playing. Plus, even though the mini-games are too simple to provide any semblance of a challenge, Nevosoft did include an impressive variety of tasks. Above all, you’ll find that the graphics are detailed enough that you won’t have to resort to pixel hunting to find the items you need. And after a long day of searching the high seas for treasure that might not exist, that’s a welcome relief.