Home / Reviews / Pirates of the Caribbean: Master of the Seas Review

Pirates of the Caribbean: Master of the Seas Review 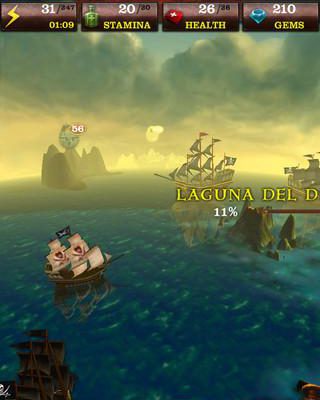 Set sail for pirate action with the latest game from Disney

Shiver me timbers, the Pirates of the Caribbean are once again taking to the high seas, vying for a hefty slice of the holiday spoils with the home release of the series latest movie, Pirates of the Caribbean: On Stranger Tides. Disney is giving fans an opportunity to pile on the bounty with their latest app for iPhone. Does this salty dog catch fair winds for the coast, or is it merely a sinking ship?

Pirates of the Caribbean: Master of the Seas is an interesting, little adventure based largely in part on the management system of Cityville any other such games. Quests are in the form of trivia questions, and correct answers bring you closer to mastery of a particular island. Many of the islands house shops available for purchase, and earning gold will allow you to build up the power of your ship. Players can also explore the seas for treasure or pick the bones of sunken ships.

The game’s other main component consists of ship duels. You simply tap on a passing ship, compare your stats, and if you’re feeling lucky, you can attempt to plunder adversaries. As you level up the game allows you to plug five points into five different stats, including energy and stamina. Energy is needed to complete quests, and stamina is used up during ship duels. 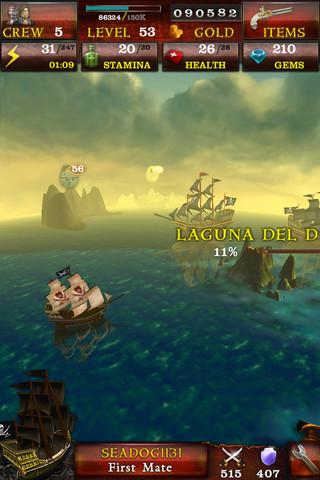 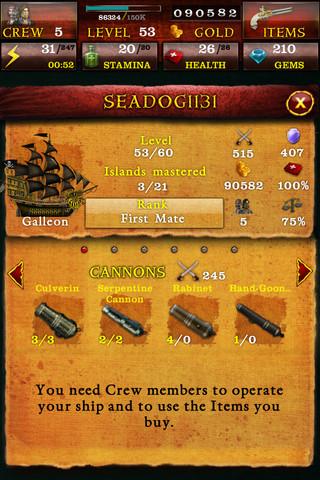 Additionally you’ll earn gems which can be used to purchase items, add crew, or speed up the process of gameplay. You’ll need crew to man cannons and such, and since they require an ample number of gems, gems are the game’s obligatory carrot for micro transactions.

Though the gameplay is simple, the pacing is undeniably fun. The quest trivia can be a tad repetitive, since you’re really just tapping the same correct answer multiple times in order to master a quest. However, the dueling, exploration, and overall progression of the game, together, make for a satisfying package.

It doesn’t hurt that Master of the Seas is a great looking game. Quests are in the form of simple text menus, of course, but the overworld is fully polygonal and quite attractive. Navigation is intuitive and fun, and ship-battle sequences are exciting. The musical themes are ripped right from the movie soundtrack, and though they are a great fit for the game’s premise and presentation, the music gets lopped off before fully completing its loops.

Keeping in mind that Pirates of the Caribbean: Master of the Seas is free, it’s a great companion to the recent DVD release. The “quests” are bit dull, but the mixture of duels, island building, and leveling up make for a pleasing time waster. It’s an app worthy of anyone’s mobile device, but Pirates fans should be especially pleased.

Guardians of Beyond: Witchville Review