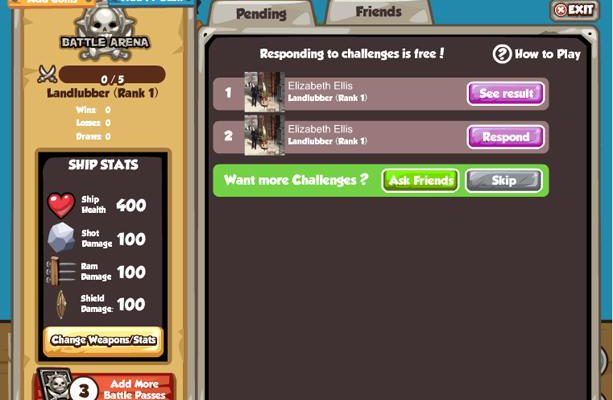 Pirates Ahoy’s new battle system and content updates capture the thrill combat, but finishing a fight can feel like a chore.

Pirates Ahoy has added some big content updates since it was last reviewed. The biggest new feature is Battles, an entire new subsystem that lets players challenge each other to friendly ship-to-ship combats. There’s a lot of other new content to explore, too: new upgrades for your island and ship, new missions, new treasures, and a wider variety of monsters to fight. While the new content is on the whole very enjoyable, it also aggravates the flaws mentioned in the original Pirates Ahoy review.

Before we get into where Pirates Ahoy goes wrong, though, here’s the basic of the Battle system. Battles are a way of pitting your ship against a friend’s. The game tracks your wins and losses and you can level up over time in the Battle system. You can’t battle random opponents as you can in Mafia Wars and you can’t complete a Battle until the friend you Challenge accepts a notification sent through Facebook. When you send your challenge, you can choose a sequence of five moves from a repertoire of three possible maneuvers. Your opponent does the same when responding and then the Battle plays out, a bit like rock-paper-scissors. 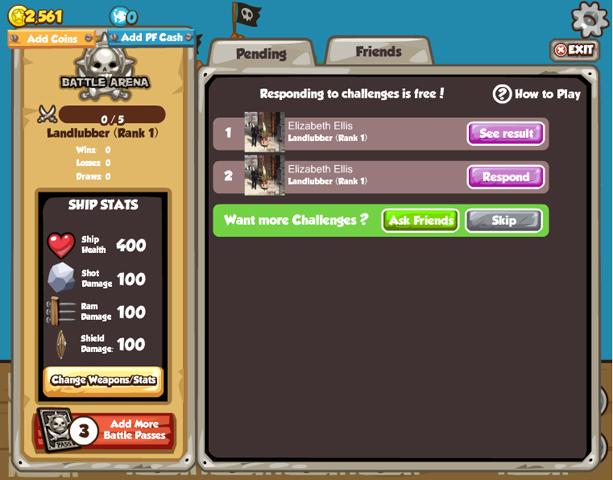 The big problem with Battles is that, well, you can’t fight randoms and can’t complete a fight until someone accepts a notification. With a group of eight friends playing the game, it took two weeks and a lot of prompting on and off Facebook to get someone to complete a battle request. If you don’t like to add friends for the sole purpose of gaming or play with absolute gobs of people, it seems unlikely that you’ll really get to do much with the Battle feature. This is a real shame, because the visuals you see as Battles play out (once both parties fulfill their end of the transactions) are a real treat. 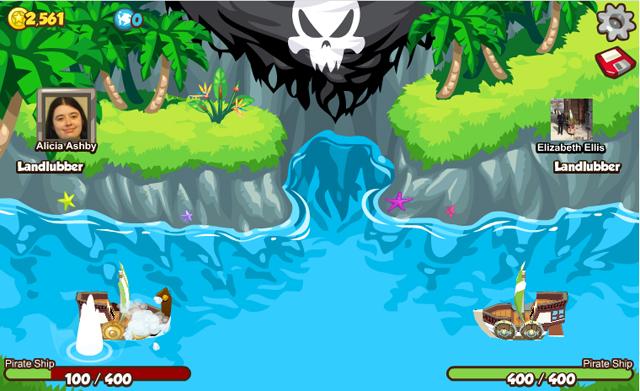 The new missions add sequences of enemies you can fight to gain big bonuses in time-based currency. More different types of enemies spawn on the map now, making the game more visually appealing and the fights less monotonous. The downside to all this is that the new stuff chews through your energy faster than ever. Mission-based monsters frequently cost between 8 to 10 energy to fight. New monster types may consume that much energy and also require you to go buy a special weapon before you can engage them at all. Pirates Ahoy sessions get shorter and shorter as you level up. 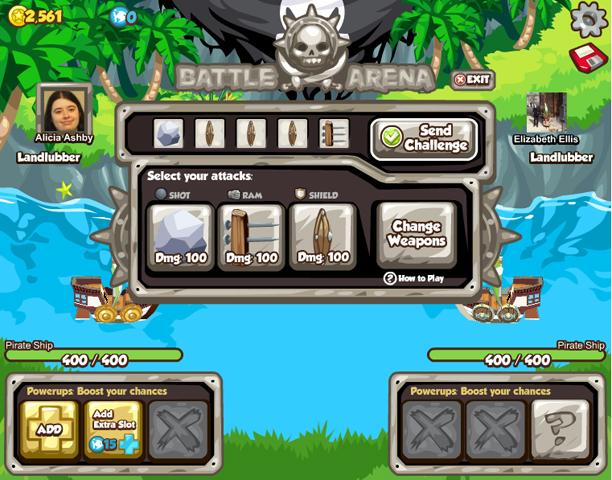 You’re less reliant on your island for acquiring loot now, as you can earn tons by visiting friends, winning Battles, and completing missions. This change makes the game feel better, but in a lot of other ways playing Pirates Ahoy has actually gotten more frustrating than it was when the game launched. At times it feels like Playfish wants players who aren’t adding enough friends to the game to pay a “no friends” tax, making them either grind forever or spend real money on virtual goods if they want to proceed.

Pirates Ahoy combines treasure hunting with exploration, city-building, and combat to create something that feels fresh.

Pirates Ahoy is in many ways everything good about the current generation of social games, combining lots of different types of gameplay into something that feels cohesive and extremely engaging. In theory Pirates Ahoy is a treasure hunting game of the same basic genus as Treasure Isle and Treasure Madness, at least in theory. Playfish decided to improve the formula at some point by adding a little something extra, then apparently didn’t stop until the game had about three more layers of gameplay than any of its competitors.

You do dig up treasure in Pirates Ahoy, but you also build a pirate ship, assemble your friends into a scurvy crew, turn your hideout into a productive pirate-supporting society, fight predating monsters, restore ancient treasures to their original glory, and spend a lot of money on tools. (Whew.) 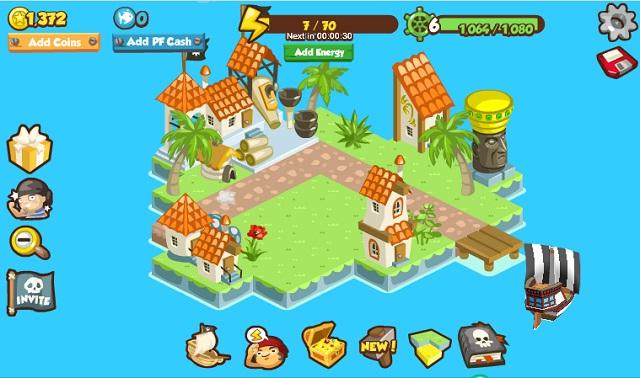 Despite all the different things you can do in Pirates Ahoy, it’s not noticeably more complicated to play than your average social game. While there are quests and missions, you don’t need to use them just to figure out what you should do next. What you should do next is always obvious: hunt treasure. So you set up your ship, build a workshop to get you started earning money, then start sailing the ocean in the starter area. You fight monsters until one drops a treasure map, then you can enter the map area and dig up tiles of beach. You’ll find restoration components like gems and gold, assortments of money, energy-restoring food, and eventually a major treasure. The treasures you collect are typically organized into groups of six. Find and restore them all and you can assemble them into one really cool treasure you can set up on your home island as a monument to your own glory (the best kind).

Pirates Ahoy takes a unique approach to the way energy works in the game as part of its general devotion to being different, which is really both good and bad. Where you increase your total amount of energy in other games by leveling up, you increase your total amount of energy in Pirates Ahoy by adding your friends to your pirate ship’s crew. This is a complicated process that involves rescuing friends when they appear on the map, then paying a hefty fee to add them to your ship. As you level up, you’ll gradually be able to add more members to your crew, but for a lot of the early game you have five crew slots to fill. 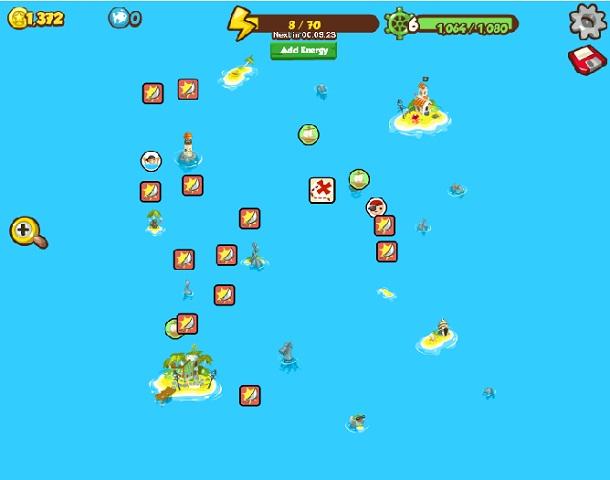 Each extra crew member is worth 10 EN and you’re worth 50. Food items restore a percentage of your total energy, not a flat number, and how much energy it takes to fight different monsters or dig up different tiles varies. This is clearly an attempt to balance the game so you don’t burn through content too fast, but Playfish ends up erring on the side of making game sessions feel a little dissatisfying. Energy restores at a rate of 1 EN per every 10 minutes. It can take an hour just to recharge enough energy to dig up a single beach tile. Obviously Playfish wants you to spend real money on the virtual goods that let you restore energy completely, but an energy recharge rate this slow is just too much. 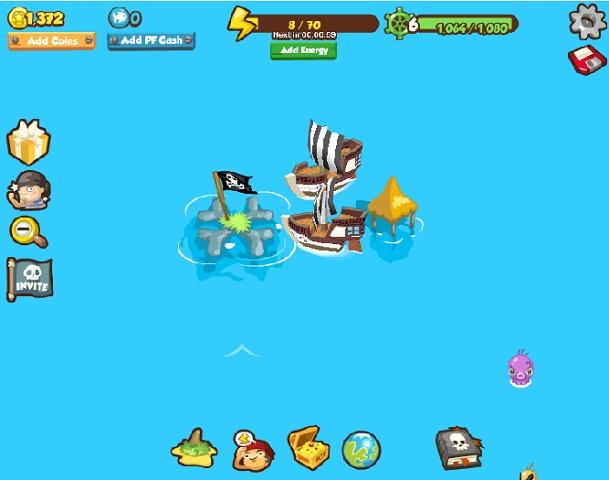 Pirates Ahoy uses simple 2D graphics, save for your 3D ship, but it doesn’t really matter. Everything is cleverly designed in a very bright and attractive art style. Even the energy problem isn’t a huge flaw, it just leaves you frustrated that you can’t play the game more often without spending real money on it. The only other thing in the game approaching a flaw is a tendency to leave you resource-starved when it comes to money, which you earn primarily from workshops rather than treasure-hunting. It seems a little strange to me that a pirate in a pirate game isn’t earning most of his (or her) loot through piracy rather than honest labor. It doesn’t make the piracy any less fun, though.