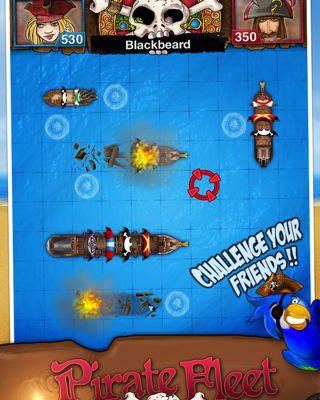 Great ideas are good to work from, even if the ideas weren’t necessarily yours to begin with. That seems to be logic behind PirateFleet for Friends, the debut iOS game from United Toy that, as you may have gathered from the name, owes much of its inspiration to Zynga’s popular With Friends series. But while Zynga with Friends has put together their own variations on Scrabble, Hangman, and Chess, PirateFleet goes after the most seafaring of social experiences – Battleship.

Dating back roughly one hundred years in one form or another, Battleship (or Sea Battle as it’s sometimes known) pits two players against each other in a guessing game in which each player is trying to guess the location of their opponent’s ships in an attempt to sink them. Players place their own ships, each of a different length, on a 10×10 grid. The ships remain in their initially placed locations as un-viewable targets for the opposition for the duration of the game.

Just about every childhood in the last 50 years was punctuated by a conversation that went something like: “G6,” “You sunk my battleship!”, so it’s likely the mechanics of the game are already something you know quite well.

Like the With Friends series, the crux of PirateFleet revolves around the idea of playing turn-by-turn asynchronously with friends and strangers. You’ll be able to invite your friends by e-mail or through your contact list. Or if you’d rather, launch straight into a game with an opposing pirate that you’ve never met before. You’ll take a turn, shut off the app, and get sent a push notification the moment your opponent has taken their turn. As soon as you boot it up again you’ll be able to see the moves they’ve made, make moves of your own, and even dish out a little smack talk through the game’s delightfully pirate-themed “message in a bottle” chat system.

What really makes PirateFleet for Friends such a winner, though, is how the game allows you to take multiple shots on each turn. One of the biggest hurdles to overcome in giving a game like Battleship asynchronous multiplayer is how to keep a player engaged. If they need to spend 20 seconds booting up the app and going through the menu to get back to their game for each and every move, that move needs to take at least as long as the startup process for the game to feel worthwhile. PirateFleet accomplishes this by giving players five shots each turn at the start of each game, rather than the customary one. As the game progresses, players will be penalized for poor performance – for every two ships you lose, your supply of cannons goes down.

Likewise, the game introduces in a neat scoring method that adds another layer to the game in addition to simply being the last man standing. You’ll earn points for making hits and sinking ships, but you’ll also lose points for every shot that doesn’t connect with a boat. 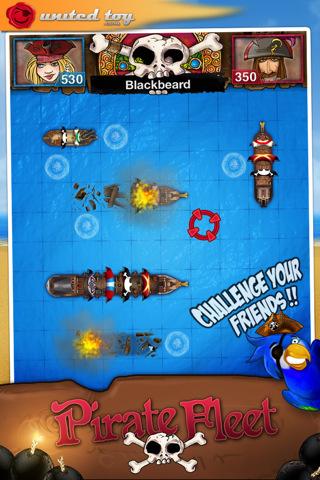 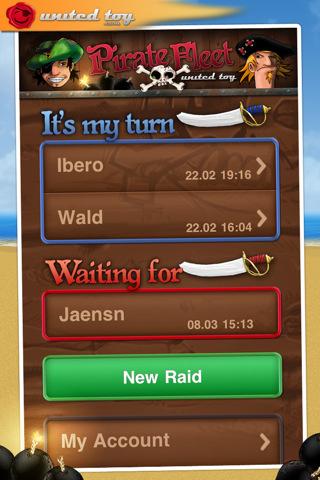 In terms of presentation, PirateFleet really managed to impress with its well-executed pirate theme and great art assets, like its wide selection of pirate profile pics and its charmingly designed ships. This is a game that has a surprisingly high level of polish, putting it right up there with the competition in terms of looks and execution.

Like Zynga’s With Friends series, the game comes in two flavours – ad-supported and premium. There’s a single free download for both, with the premium version unlockable through an in-app purchase. The game does limit things a bit in the free version – you can only have 10 games going on simultaneously – but in the end, so long as you don’t mind seeing full-screen ad images after every turn, it gets the job done just fine.

It would have been nice if PirateFleet for Friends included some kind of a solo play for people too impatient to wait for a live opponent to take their turn, but honestly, that’s not what these sort of games are about.

In borrowing the With Friends style of asynchronous gameplay and using it as the basis for a great multiplayer Battleship experience, United Toy have hit on a winning formula. In fact, the game is so good that I wouldn’t be surprised if United Toy was the next company to get snapped up by Zynga in their endless parade of acquisitions. If you’re a fan of Battleship and you prefer the challenge of a real opponent rather than the mindlessness of a computer player, PirateFleet for Friends is an outstanding little app that sinks all the right ships.