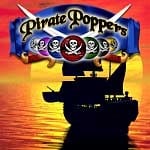 Somewhere, the pirates had a party and painted all their cannonballs pretty colors. Then, lined them up and rolled them down some rails while taking potshots at them with their biggest cannon. Well, that’s not actually the back story of this game, but I tried to imagine what might be going on in some logical sense … and that’s about as close as I could come.

Logic aside, Pirate Poppers uses a similar game system to Luxor and Zuma – colored balls run around on different tracks while you fire other balls at them to create color matches of three or more balls. Meanwhile, “chains” of balls come in waves, and you have to prevent them from entering powder kegs at the end of the rails or you lose.

A cannon moves horizontally at the bottom of the screen, and shows the ball you are about to fire, plus one “on-deck” orb that you can switch to at any time (tactically important). Making numerous matches in a row or getting combos will reward you with power-ups that come in handy and can bail you out of tight situations. Some are cannonballs with special properties, while others take effect instantly. You must catch them as they fall, however, by moving the cannon, adding an extra element to the game.

Nine power-ups, six of the instant-effect variety and three special cannonballs, are available. My favorites are Stern Wind, that often revives a game in trouble by making all chains move backward; Color Bomb, that detonates all balls of a certain color; Chain Breaker, that explodes all ball sequences of three or more of any color; and the Explosive Cannonball, that explodes all balls within a certain radius, shakes the screen, makes a lot of noise. And, if you gain enough points, you also get a “treasure shower” that blows up balls randomly and drops a dozen or so treasures in quick succession.

In the main game mode, Adventure, Pirate Poppers involves a map, a journey, a story of sorts and a concealed map that promises hidden opportunities. As a vanity reward, you also get to fill a treasure room with gold, jewelry and other items obtained in your travels. I didn’t get too worked up by the story, map or treasure, but I definitely enjoyed playing the game.

Simple but challenging, I sometimes felt, metaphorically, the point of a cutlass in my back while I slowly “walked the plank.” As balls march inexorably toward the powder keg, you look frantically for a solution, but at times luck just isn’t with you. The wrong balls appear or you don’t get the power-up that could bail you out.

However, Pirate Poppers requires skill as well as luck. For instance, I learned how to set up matches to clear several chains in combos. And, I figured out that cannonballs of the same color were attracted to each other. So, I could close gaps and snatch victory from the kegs of defeat … so to speak. If this were nothing but a totally mindless and repetitive game, I would have abandoned ship a lot sooner, but as my skills and perception of the game increased, I had the satisfying sense of accomplishment that comes from playing a game that both challenges and rewards.

To be sure, some levels, particularly those with two separate rails and powder kegs, put up a valiant fight. In the end, though, I always managed to win somehow, even if it took ten tries. But, “Ho, ho, ho and a bottle of rum!” was I a happy pirate when I finally popped the last ball from the screen.

Two additional modes of play include Arcade and Puzzle. Arcade Mode is similar to Adventure, but with limited lives. Puzzle Mode is fun in a different way. Although a timer counts how long you spend on a puzzle, the balls remain in place until you fire. This brain exercise requires you to clear all the balls from the board with limited ammunition. Balls must be fired in order, so you have to plan each move.

As fun as it is, Pirate Poppers could be better. The treasure room is okay, but would have been better if the gold, pearls and other booty could have been traded for something cool and useful. And, while the limited story adds an element of imagination, it wasn’t really that important because it had no direct bearing on the game. Finally, although there is variety from level to level, 77 levels (in each mode) becomes repetitive, even if it also gets harder. There’s little change or reward in higher levels other than faster moving chains, many more chains to eliminate and the introduction of different colored balls.

So, the jury is in and this game is convicted of piracy … and fun. Each level presents its challenges, and the production values and execution are first rate. Music is intense and grows increasingly so as the game gets more challenging, and the sounds of the balls hitting and exploding are quite satisfying. Finally, occasional pirate laughter in the background is fitting since it often has the next-to-last laugh. Pirate Poppers has its own twists, angles and curves, and I definitely had fun playing it. And, that is good enough for this old scallywag.