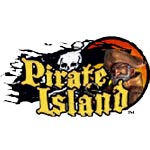 My thoughts about Pirate Island are at odds with one another, like two buccaneers fighting over buried riches. On one hand, the world didn’t need another match-three sequel, let alone one that was all but identical to its predecessor, Treasure Island. Yet after burning through 61 stages in two days, I want more. How do I review a game that offers nothing new but still grabs me in a way few releases do?

Perhaps I should relax and take care of business. As I mentioned, Pirate Island is a match-three game. Unlike Bejeweled and Big Kahuna Reef, though, you don’t swap neighboring objects to create matches, but rather you pick up items and place them elsewhere on the game board. For example, if you start a level with a crown in hand, you must match it with at least two other crowns aligned horizontally, vertically or diagonally. When you place the crown you’re carrying on the board, you pick up a new object for which you must find a match.

When you create matches of more than three objects, you generate one of four power-ups that can clear multiple tiles off the board. For instance, matching four items makes a bomb that, upon use, detonates all of the tiles and chains within a small radius. The coveted Lightning Strike for matching five objects returns as well.

You can also collect two bonuses. The Hourglass gives you more time to complete the current stage, while the hammer allows you to smash a single tile or unlock the item resting on it. You acquire these bonuses when they fall off the bottom of the board or as you pick them up when making a match.

That’s the core gameplay in a nutshell. As before, Nevosoft and Sandlot Games used these building blocks along with a limited amount of time and a set number of lives to create 100 levels that will have you on the edge of your seat. The developers seem to have taken great pleasure in isolating game pieces off the main cluster, forcing you to think about how to create matches or use power-ups to reach them. If things get too tense, you can switch to a second game mode that gives you all the time you need.

Between levels, you’re given a chance to solve sliding picture puzzles and Memory challenges, none of which are timed. If you complete these mini-games, you earn additional points; if you don’t have the patience for them, a “Skip” button allows you to move on.

You can also earn trophies for performing spectacular feats. For example, the Deadly Matchlock Pistol is awarded for popping eight tiles in one shot, while the Tricorne of Plenty is awarded for a combo of eight matches. Both are on display on my captain’s table.

So if Pirate Island is close to being a pixel for pixel copy of Treasure Island, what makes it worth playing? First and foremost, its gameplay can be downright absorbing. The word “addictive” is overused when it comes to casual offerings, but it applies here. Good level design helps, especially since you’re asked to do the same thing stage after stage.

The visual presentation is also well done. A long-winded narrative propels Pirate Island forward and allowed the artists to create colorful characters and beautiful island backdrops. The boards themselves shine, too, although more variety among the objects you match would’ve been welcome. And the dancing 3D skeletons are back, saving you the cost of renting Grease or Saturday Night Fever when you’re in the mood to boogie.

Beyond unoriginal and repetitive gameplay, my main beefs are carry-overs from Treasure Island: the font used for the menus can be confusing to the eye, and getting from the end of one level to the start of the next requires too many mouse clicks. A new font and a streamlined interface would be nice additions. I also encourage Nevosoft to include a forfeit option, since the game forces you to finish levels you won’t win, even when you quit and restart.

Should you purchase Pirate Island? If you wanted more at the end of the original, download the demo and give it a shot. Chances are you’ll have a good time. But if you’re looking for new adventures on the high seas, look elsewhere.