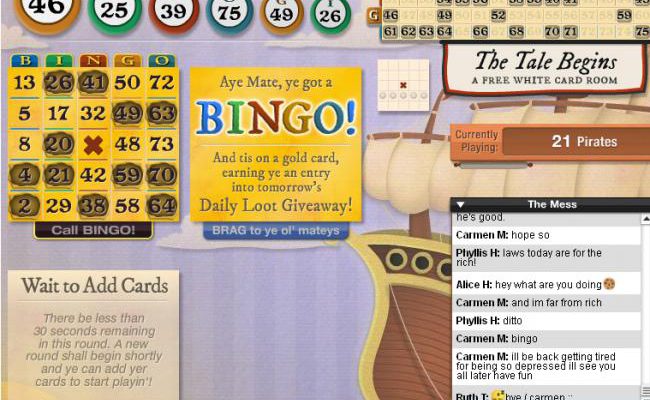 These pirates will steer you to clear skies and sandy beaches

As one of the oldest social games of the modern era, it’s unsurprising to see bingo flourish on Facebook. Where folks used to gather in meeting halls and churches, fans of the pastime can now simply open up a page in their preferred Internet browser. Gamesville adds a pinch of its own spice to the formula with Pirate Cove Bingo. And though it might not be a trove of innovation, it can perhaps be considered something of a hidden treasure.

Upon first jumping into Pirate Cove Bingo, I was thrown for a bit of a loop. Rather than run players through a few basics, you’re simply dropped into a room where the voice of a salty pirate calls out bingo numbers. Without any fanfare whatsoever, Pirate Cove Bingo runs on like an endless train. 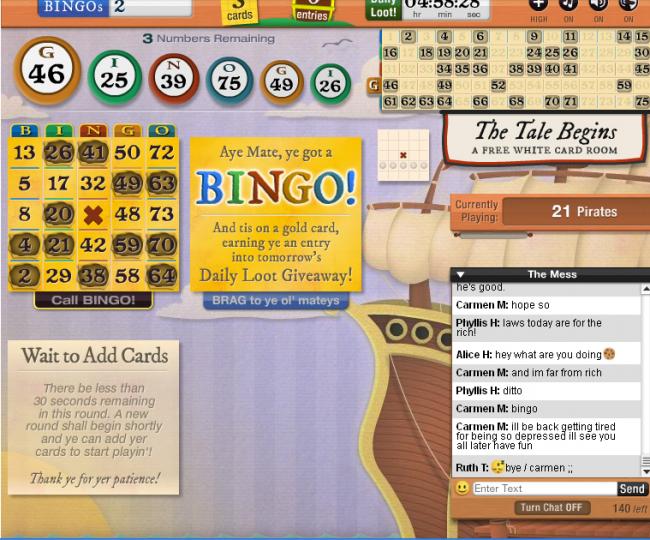 Gameville’s offering is a very straightforward game of bingo – no power-ups or new-fangled doodads. You can play between one and four cards during each round, with cards utilizing five-number patterns to win. The pirate caller shouts out numbers at a nice, even pace in a clear voice, and cards are both number- and letter-coded, making it easy to quickly identify and stamp any numbers you may have.

Currently, the big draw for Pirate Cove Bingo is the daily allowance of gold cards. You’re given five gold cards to play with each day, and any time you win a bingo with a gold card, the card is entered into a daily sweepstakes for a $25 cash prize. The winnings are no windfall, but for a free game, it’s a great incentive to keep players coming back for more. However, should you win the $25 prize, you won’t be eligible to win again for at least 90 days.

Luckily, the actual gameplay is fun. The simplicity is undeniable, yet more isn’t always better. The pirate theme is strictly window dressing, but the visuals and audio are quaint and enjoyable. The graphics have an attractive paper styling similar to Kirby’s Epic Yarn on the Nintendo Wii, and you’ll never have to worry about laggy gameplay. 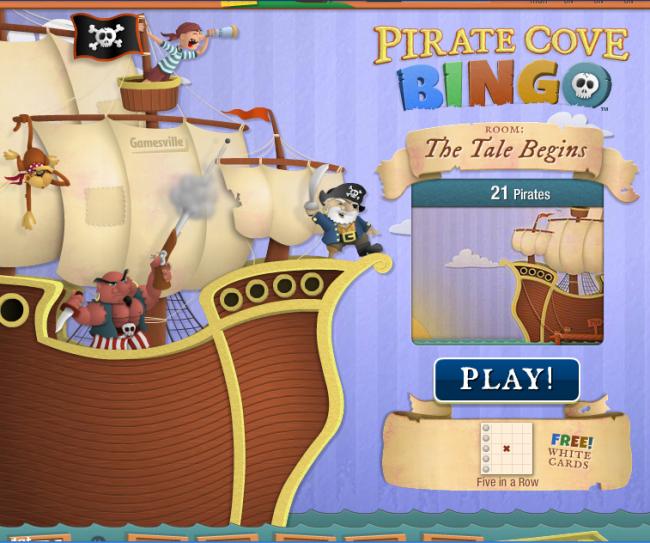 Though the exact details are unclear, the developers do make mention of an experience-and-coin system on the way. Hopefully this will offer even more incentive for continued play. New rooms are also planned as part of future updates, so if you enjoy a good game of bingo, there’s ample content to look forward to here.

When a reviewer continues to come back long after he’s gotten what he needs out of a game, that’s usually a good sign. The game’s social features are simple yet meaningful, and the promise of winning real cash is always a boon. Pirate Cove Bingo is a by-the-numbers take on a very old formula, but it’s streamlined and tweaked to near perfection.