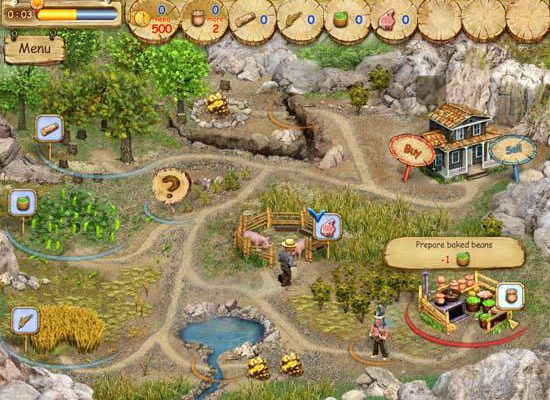 I grew up obsessed with the history of the pioneers and westward expansion. I can remember long hours spent playing The Oregon Trail in all its EGA glory. So I was very excited to get to review Pioneer Lands, a new time management/simulation game from NevoSoft. While Pioneer Lands does have its moments of fun, it feels very familiar and doesn’t offer anything new. Still, the game is addictive, but it just doesn’t have the feel you would expect from a pioneer themed game.

Pioneer Lands has 99 levels to play through. For the first 50 you will only be able to have two male workers to control. After level 50 you can hire two female workers as well. Men and women complete different tasks so the player will have to strategize to complete all the goals for the levels. Oddly, when you hire a female worker, she responds with a male voice. 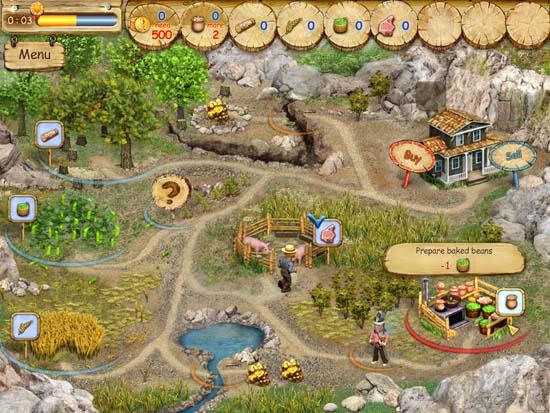 Each level also has an additional challenge that you can meet. You will need to locate the question mark sign on the level and send a worker to it to unlock the challenge. The challenge could be to make a certain amount of money, collect all the resources in the area, or ignore certain resources lying around. This adds an extra layer to the gameplay as well as increasing the difficulty of the level, especially if you are trying to finish the level in minimal time.

In Pioneer Lands you will be collecting numerous resources, harvesting fields and cooking meals. Most of these items you will be selling for money so that you can buy more resources. There never seems to be a goal you are striving for. You play through the levels, access new areas and move forward on the map, but to what? The last level is a spooky forest (although the levels themselves look like all the rest). A spooky forest seems an odd place to stop a game that is about the pioneers. Each level goal was to collect a certain amount of an item (wheat, flour, cranberries, etc.). Without a plot driving the game forward, Pioneer Lands falls a bit flat. 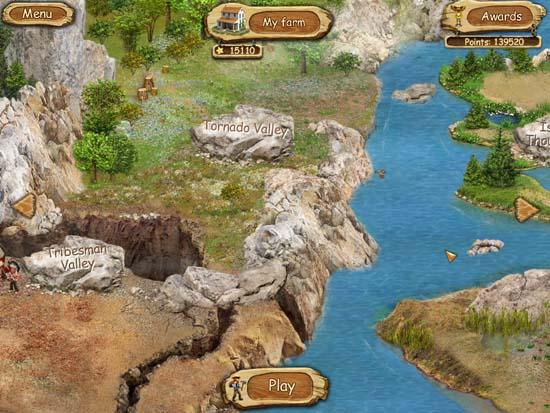 This does not mean the game isn’t enjoyable. It’s a standard time management game and it is definitely addictive. Beating the later levels and getting a gold rating for them can be quite a challenge. You will have to strategize and pay attention to the area to best decide how to complete your goals.

There are also three bonus levels at the end of the game. These three levels are actually very different from the rest of the game. These levels have a puzzle element to them in addition to time management. I don’t want to give too much away, but they were quite enjoyable and challenging. It would have been nice to see several levels like them in the main portion of the game.

In the end Pioneer Lands was not able to transport me to the old west but it was an enjoyable game nonetheless.