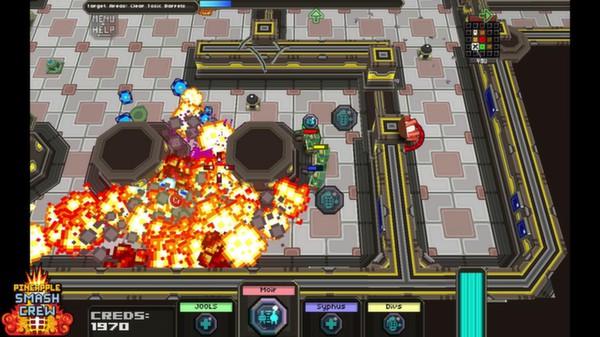 It was only a couple years ago that I discovered that I absolutely LOVE pineapple. A couple of friends came over and made dinner for my wife and I that included grilled pineapple kabobs. The thing you have to understand is that I’m typically a pretty fussy eater, but in the name of being polite I had made the decision that I was going to eat whatever they made regardless of whether I thought I liked it or not. I stabbed the yellow fruit with my fork and put on my best poker face to hide the utter fear I had that I would have to eat this stuff I was obviously going to hate. It was about 4 or 5 seconds after the juicy amazingness exploded into my mouth that I realized it was probably the best thing I ever tasted.

The above anecdote has almost nothing to do with this review. You could say that it has about as much in relation with the game as the name Pineapple Smash Crew does. So let’s move on.

Pineapple Smash Crew is, at its most simplistic, a twin stick shooter for your PC. Actually, that’s exactly what it is, and nothing more. You explore abandoned, randomly-generated space ships with a four man crew that you control as a single unit. There’s a goal to each level, which usually includes clearing all the enemies from certain rooms in the Zelda-ish layout. Keep at least one of your crew alive to finish the level, but it highly benefits you to keep as many firing as possible.

Each Lego-figure-looking member has their own life bar and can carry a single special-use weapon beyond their normal machine gun. The more of crew that’s alive the more firepower you’ll have. Keep them alive through multiple ships and they can level up, gaining you access to better special weapons.

That’s about the size of it. You’ll keep exploring different ships and the difficulty will ramp up as you go along. The pixelated aesthetic plays in well to the simplicity of the game’s mechanics and premise. The crew will drop pop culture-inspired quips in text form, and there’s some text to discover, but the story is almost non-existent. But Pineapple Smash Crew doesn’t really need one. You see, the game was created by one dude named Rich (and his brilliant developer name RichMakeGame). So many parts of this game work so well that asking any more from him would almost be rude of us.

The controls work perfectly and feel great, better than almost any other PC dual stick shooter that tries using mouse and keyboard. A fun chiptune soundtrack has been provided by Syphus that fits perfectly with the visuals. And this is not a system-taxing game by any stretch of the imagination; it ran great on my four-year-old laptop that has trouble running almost everything.

My only minor complaint is that when you’re simultaneously operating four different characters, you can’t help but think about how much fun this would be in co-op. Not only does the game have “Smash” in its title, but a lot of it looks like the class arcade title Smash TV, one of the all-time great competitive co-op games.

Pineapple Smash Crew can get a little repetitive after a while, but I think this is a game best devoured in small bites. It’s not going to command great amounts of your attention or time, which is fantastic. I already have enough games that do that. It will reward people looking for a fun and challenging experience, and is yet another glimpse of how awesome the indie PC game scene is right now.