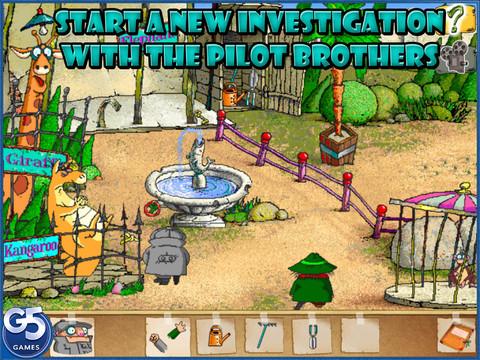 There’s no question G5 is aware of what makes a compelling game.  With engaging titles like Special Enquiry Detail: Engaged to Kill, Supermarket Mania 2, and Virtual City 2 under their belt, I generally put faith in their ideas—including their recent decision to bring 1997’s Pilot Brothers: After the Striped Elephant to iOS, as just Pilot Brothers.  Unfortunately, this is one game they should have left in the past.

A comical cartoon duo from Russia, the Pilot Brothers—Chief and Colleague—are known for solving crimes and other predicaments (like making breakfast) with a flair for the zany.  Although this is their first excursion to American shores, the pair has a long history of experience in video games, with more adventures under their belt than Professor Layton.  In Pilot Brothers, they are tasked with locating the striped elephant Baldakhin, who has gone missing from the local zoo.  The number one suspect is a cruel and elusive trainer named Karbofoss, whom you will track throughout the game’s fifteen point-and-tap scenes.

Although the game has an overarching story and goal, each scene is self-contained and will usually have you picking up items, inspecting suspicious areas, and using what you’ve collected and learned to open paths or doors to the next area.  Once you progress from one scene to the next, there is no need or option to backtrack, besides replaying it from the main menu.  There is also an occasional arcade mini-game in place of the standard puzzle, which forces you to get Chief and Colleague to their destination through properly timed movements instead of solving the room’s conundrum.

Pilot Brothers is at its best when its puzzles reflect the surreal nature of the cartoons and encourage slightly irrational, but entertaining, thinking.  Pouring water on a tree to make bananas grow instantaneously or using a TV cable as a bungee cord are slightly ridiculous, yet conceivable ideas used to solve parts of certain puzzles.  However, these types of clever solutions are the game’s exception, not the rule.  More often, you will need to use items somewhat randomly, such as having Colleague spray himself with shaving cream while standing in a specific spot in the kitchen.  All puzzle games suffer from this randomness to some level, and G5 has graciously added two critical features to this mobile version: a hint button, and a video solution option.  Both buttons will fill up as your time in a scene passes, allowing you to use them after about a minute of waiting.

Unfortunately, the inclusion of these options does not resolve one of the game’s most glaring issues: its controls.  On a handset, the scenes and items within them are far too small, making clicking where you intend a nearly constant battle.  Even with my creepily pointy fingers at the helm, I became stuck on one of the arcade levels for over ten minutes—not because it was challenging to “solve” or time correctly, but because the game kept moving Colleague to a slightly different location than where I pointed.  On another level, there is about a three-pixel margin between where Chief needs to stand so you can progress, and everywhere else on the map.  Of course, no matter how many times I clicked on the “correct” area or immediately near it, Chief would stand slightly off-base and then give me the classic “I don’t get it” response to an unavailable command.  The simple solution to this would be including a zoom-in feature to update this from its more precise PC counterpart—which G5 has done for two mini-game puzzles in certain scenes, but left out in the rest of the game.  Thus, even with a video solution available to show you exactly how to solve a scene, you’re left with the more frustrating challenge of actually solving it through the controls available to you. 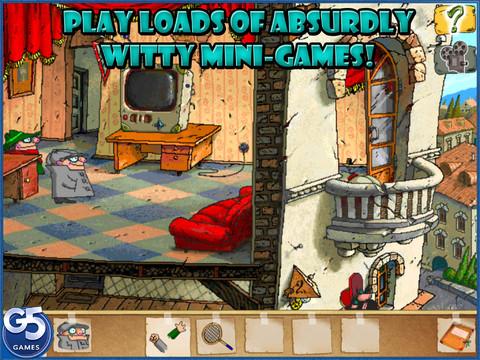 The hint option ends up being even less useful, based on its current iteration.  Asking for a hint will not point you toward the next item or area you should focus on—instead, it circles every part of the scene that you can interact with, including objects you’ve already picked up.  This means if you enter a scene with ten possible interactions, and pick up three items, the hint button will still circle the same ten areas.  This, coupled with the unzoomable scenes, results in a lot of random tapping and being forced to watch your characters walk around aimlessly way past the point of “I give up, just show me the video solution.”

Besides the controls’ artificial lengthening of playtime, Pilot Brothers is extremely short.  Of the fifteen scenes available, only a handful have very in-depth, multi-step solutions.  Some areas require as little as two actions to move forward, without any other options or distractions in place to lead you toward alternate solutions.  This may be welcome to players who don’t want to spend all day picking up unnecessary junk, but there is little sense of actual discovery or puzzle solving.  Those who can look past Pilot Brothers‘ faults and merely enjoy having an entry in this hard-to-find genre should hope G5 brings the sequel, On the Case of the Serial Maniac Sumo, to mobile as well.  Otherwise, you’ll likely finish this one in less than two hours—a length I was grateful for after my hundredth ineffective tap, but one that won’t satisfy hardcore puzzle fans. 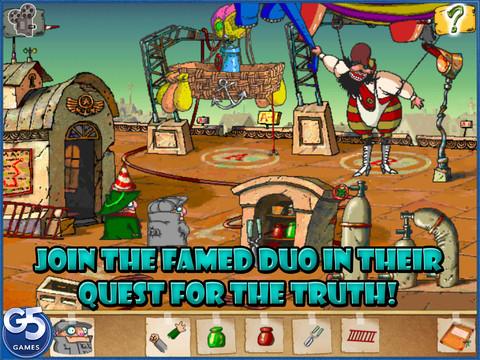 Ultimately, my disappointment in Pilot Brothers extends too far to allow me to recommend it to anyone, including those serious fans of the genre.  Even enjoyable aspects of the game feel unpolished and, not surprisingly, dated.  The music, which is catchy, atmospheric, and varied—each scene has a different song—is far too loud in almost every instance, and drowns out Chief and Colleague’s dialogue.  Your options for fixing this are: turn your master volume up, or music off.  Using Chief and Colleague themselves, who interact with objects and areas differently, begins as a novel concept but quickly becomes more of a chore than an advantage.  There’s little rhyme or reason to which character is needed in each circumstance: it makes sense that the smaller Colleague would climb a tree in level two, but by the final level Chief is the one climbing trees.  Since every interaction is assigned to one or the other, a lot of time is wasted attempting to send both of them to investigate the same area and waiting to see which one works.

Of course, that’s another way to lengthen this otherwise short experience.  You can spend a lot of time “playing” Pilot Brothers without ever really achieving anything, including fun.  I’m sadly grateful to take leave of Chief and Colleague.  If we meet again, I hope it’s in a much, much updated format, relevant to the current platform. Until then, do svidaniya.