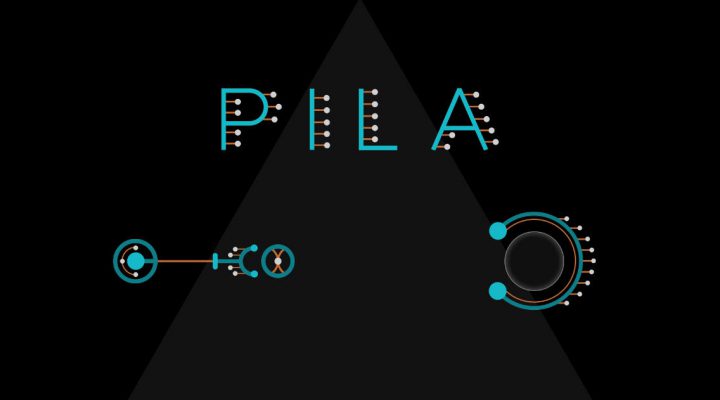 Lovely minimalist art style that seems indecipherable at first but simply makes sense as you play.

Extremely challenging puzzles that are always satisfying to finally figure out.

Clever use of items, obstacles, and active tapping creates a surprising amount of variety between stages.

The current full-screen reset is not conducive to trying out different ideas or solutions.

Without any sort of hint system or level skip, you could be stuck on a stage for quite some time.

Pila is a beautiful, abstract puzzler that looks a bit like ancient iconography at first glance. Its circles and arcs float in a timeless black space brought into the future by crisscrossing wires and an electric blue and orange color scheme. It manages to simultaneously feel aged and completely fresh, intimidating and inviting, esoteric and understandable. 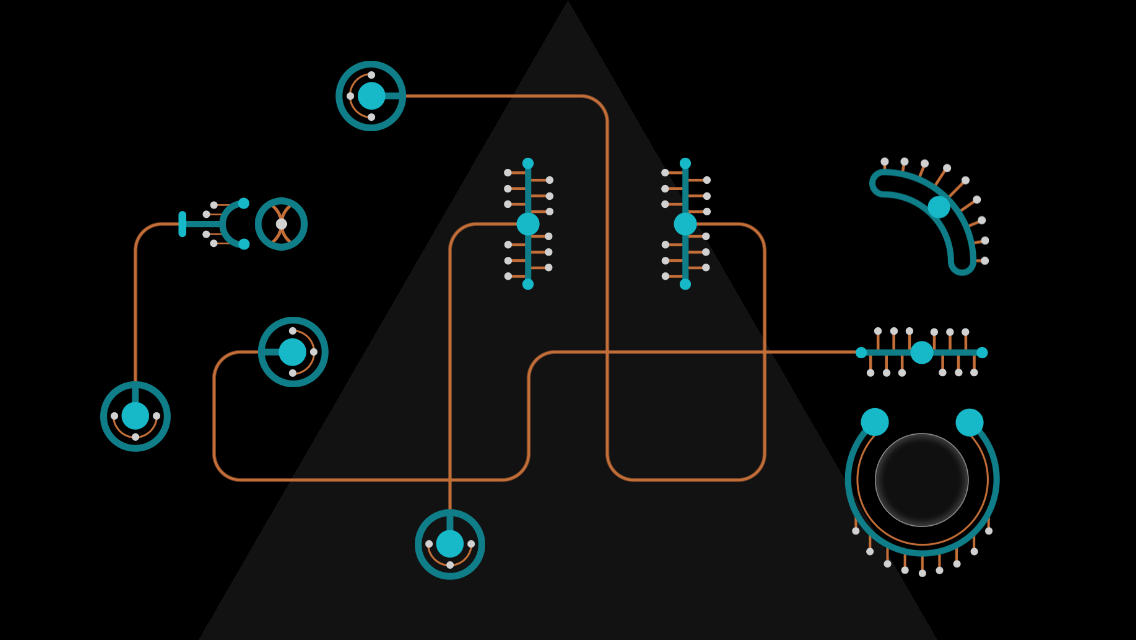 Once you begin playing Pila, its instruction-less gameplay explains itself with every tap you make. Your only goal is to get the smallest circle into the basketlike opening located somewhere on-screen. Every stage begins by launching the ball from its plunger; it will fly straight ahead until it runs into something. If that something is another circle, the plunger, or any of the tendril-covered backsides of the goal or the arcs scattered about the level, the ball will stop and reset. To guide the ball safely past these obstacles, you’ll need to rotate the curved platforms so it rolls smoothly across them and changes course, like a marble in a sliding maze when it hits a wall.

The curved platforms are controlled by buttons connected via the intricate and, at times, intimidating collection of wires strewn about the screen. While this initially appears to add a layer of unraveling to the equation—backtracking from the platform you want to move to find which button controls it—you can tap the buttons freely and as much as you like before ever launching the ball, so it’s simply a matter of tapping and seeing what moves. Later levels add some extra complexity by throwing in multiple platforms connected to the same button which rotate together, or platforms that are rotated via other means, such as buttons that the ball itself must touch. 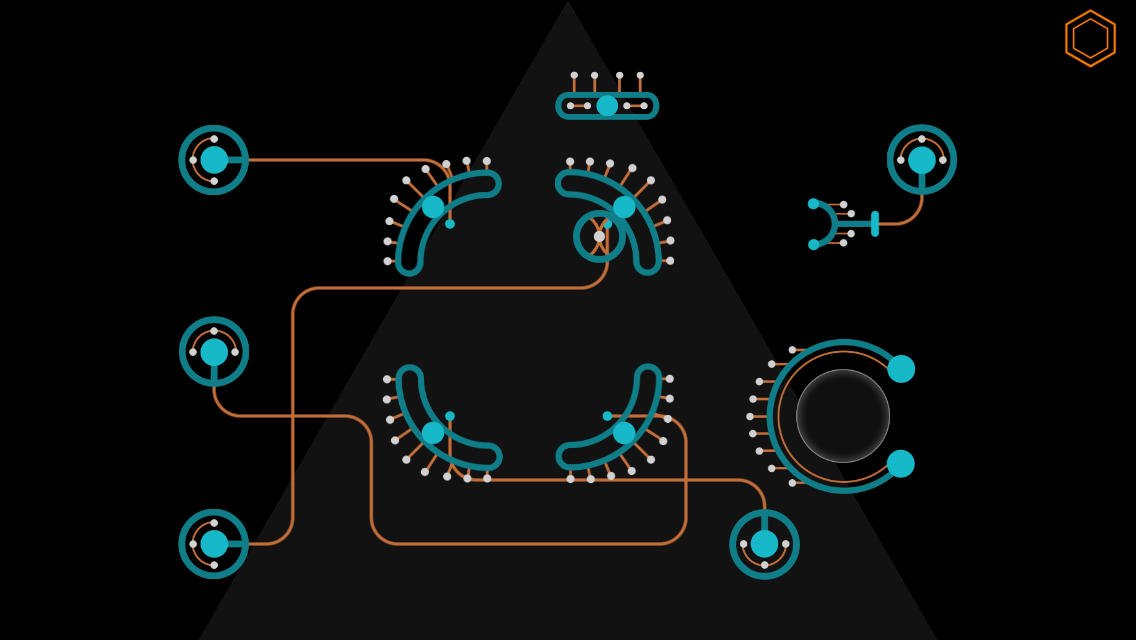 Even before you get to these more complex levels, Pila is a challenging game. While very early stages will only require you to rotate a few platforms and then send the ball on its way, watching as it slides to the goal unimpeded, the difficulty ramps up quickly. You’ll soon be sending the ball off one side of the screen and back onto the opposite—a ball that floats off the bottom of the screen will reappear in the same column at the top—in addition to rotating platforms mid-run when the ball inevitably crosses the same area going a different direction. You not only have to plan out the route in advance, thinking through multiple steps—“this platform needs to face left on the first pass but right on the second”—but you also have to enact those movements mid-run without impacting the ball and while remembering which button to press.

It’s a complicated, mentally taxing ballet of taps and turns that will inevitably require many do-overs, but when everything comes together it’s oh-so satisfying. The ball effortlessly glides through each curve, completely predictable in its constant speed and direction, yet delicately easy to lose control over. One wrong tap or arrangement will send it floating off-course and outside of reach, forcing you to start again. When the perfect series of turns is executed just right, you’re treated to a smooth route that almost feels automated, except for all the effort you just put in. 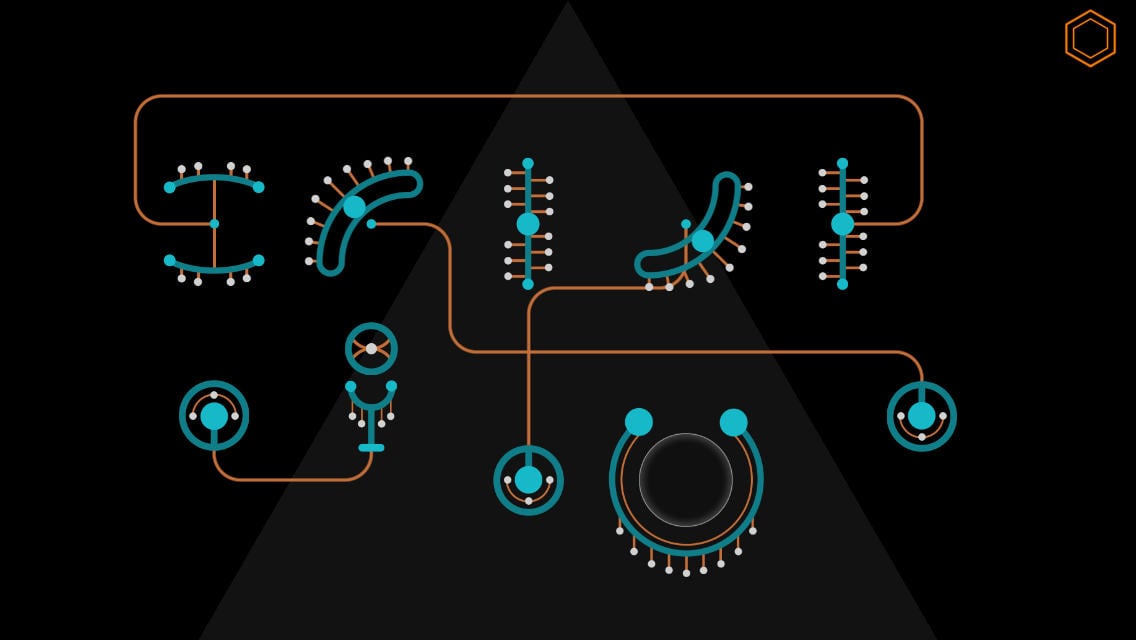 Pila’s biggest problem is that it doesn’t encourage or reward testing routes and physically planning things out. Every time the ball hits an obstacle or gets off course, the entire level is slowly “erased” and fades away to nothingness, then is redrawn as it was at the very beginning. While this is lovely and interesting the first few times, it takes about five seconds for a level to be broken down and rebuilt: this might not seem like very long, but five seconds of waiting every time you make a mistake is a frustrating punishment.

Another issue with the reset system is that you lose any adjustments you’ve made. If you’ve figured out the correct starting positions for all the arcs, you’ll have to tap each one to rotate them back where you want them every time you reset. We realize that later stages could not only reset the ball since it actually impacts where some platforms end up. However, if Pila merely reset the ball and any platforms it had changed and left the player-controlled platforms as they were, it would not only save a lot of repeated efforts but also let players physically think through puzzles more effectively. We personally like to move a platform and see how that affects our layout by actually shooting the ball at it. With the current setup, you essentially have to mentally and air-swipingly plot everything out and hope you’re right—or deal with a lot of resetting and redoing if you’re not.

If you can accept the less hands-on approach to puzzle-solving, Pila is a rewarding experience. Its difficulty often borders on hair-tearingly challenging, but its lack of a timer, move limits, score, or the like let you focus simply on getting to the goal in whatever way possible. It doesn’t feel quite like any other puzzler we’ve played in recent years, instead bringing together a unique mix of mazes, train shunting, crossed wire brainteasers, and a touch of pinball to create something fresh and (at times frustratingly) fun.