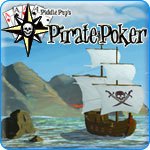 In Las Vegas, one of the gambling meccas of the world, there are a ton of ways to lose your money, or risk it all for that big win. On a recent trip there, I noticed that one of the more popular methods to lose your cash is video poker, where I saw people sitting there in front of those blinking terminals for hours on end at all times of the day, hoping for the computer to generate a wining hand. If this activity sounds appealing, then Piddlepup Pirate Poker is for you. If not, then you may want to think twice before downloading.

As the name describes, Piddlepup Pirate Poker is a poker game with a Caribbean island/pirates theme. (Piddlepup is the developer; there are no puppy piddles here.) There are six modes of play: Deuces Wild (all twos in deck are wild cards), Jacks or Better (only combinations with face cards and aces allow you to win), Tens or Better (only combinations with tens or higher allow you to win ), Two Pair or Better (must have at least two pairs to win), Joker Poker (one joker in the deck which is a wild card) and finally, Aces and Faces (must have pair of jacks or higher to win).

The modes are explained before you play them, which is a nice touch for poker beginners. It seems like a lot of modes, but on closer inspection, many of them are quite similar. The most fun mode is definitely Joker Poker, simply because you have the entire deck available to make winning hands.

Creating these winning hands is the only way to win in Piddlepup Pirate Poker. Rather than play against either another live player or even the, your goal is to work with the cards you’ve been dealt, and try to make winning hands. The only poker here is five-card draw, so if you watch the World Series of Poker, you’re out of luck.

Upon entering your name, the game gives you 1000 coins to begin. Basically, the game consists of picking a poker mode, then picking the number of simultaneous hands you want to play. You can choose to play one, three, five or ten hands to try to increase your odds of winning. Five cards per hand are dealt face down, then you ante up to a maximum of five coins per hand. The bigger the bet, the bigger the payout. The cards in your primary hand become visible (if you picked multiple hands to play, you only get to see one of them), then you pick which of the five cards – if any – you want to hold.

Any card you choose to hold is held in every hand of your multiple hands. For example, if you have a king you’d like to work with, and you’re playing with five hands, the king will be an active card in all five hands. Clicking the deal button, the cards that you discarded are replaced, and you get to see what you might have won. A handy chart shows you what hands pay out, and which ones don’t. Lather, rinse, repeat.

Sound boring? That’s because it is. Winning in Piddlepup Pirate Poker involves no skill whatsoever. None of what makes real poker fun is replicated here. No bluffing, no opponents and only a single round in which to pray that the hand you end up with will mean anything. Since you only have one opportunity to ditch useless cards, there’s not a lot left to do. The only detail that differentiates the modes are how high the cards must be to actually profit. This is why I enjoyed Joker Poker most, because if I had three-of-a-kind with a lower number, I could still win.

But winning still doesn’t matter. On a lark, I intentionally lost all my coins, just to see what happened. When I got below 50 coins, the game asked, “Would you like more money?” I clicked yes and received 1000 coins. Essentially, I ended up with more coins than when I had started. I wish I could have done this in Vegas! Granted, the game occasionally gives you a mini-game allowing you to double-or-nothing your winnings (I played a shell game, following the shell that had the coin under it) but considering it doesn’t matter if you lose it all, why bother playing it?

Speaking of not mattering, the pirate theme is barely used to any real effect. Sure, the graphics are decent and reflect the Caribbean motif (with a small number of selectable card styles reflecting the theme), but don’t really add anything to the game. Worse, though, is the music. There are some sea shanties and Caribbean steel drum tunes, but they’re not related at all, and there’s no flow to the music. The main menu screen uses this ominous, dramatic string theme, but the mode selection screen has a bright upbeat number to it, which is very jarring.

But the most annoying thing about Piddlepup Pirate Poker is that switching between modes is a pain. When you leave one mode, rather than going to the mode selection screen, you’re taken back to the title screen. Not that you’ll be switching between the modes much.

With so many other, better poker titles, Piddlepup Pirate Poker is about as much fun as a wet newspaper. Let this pup pirate out in the back yard, because it’s not housebroken.