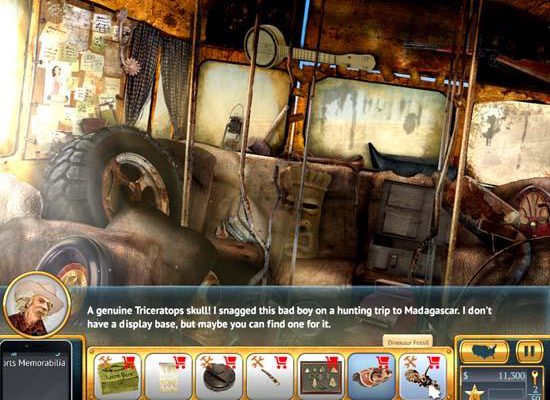 Pickers celebrates the art of turning trash into treasure

Popularized by television shows like American Pickers or even Storage Wars, the act of turning trash into treasure has found new life in the States in recent months. Taking that ideology to heart is MumboJumbo’s Pickers, a combination hidden object game and marketplace simulation that asks you to travel throughout America finding lost treasures, only to turn around and sell them for major profits.

You’ll be able to choose from multiple gameplay modes, based on difficulty, with the “normal” setting starting you off on a 30-day quest to rise through the nationwide Pickers leaderboard. You’re competing against Computer AI players that you never see, as you’re given $10,000 and are asked to turn that into as much money as possible within the month time-limit. 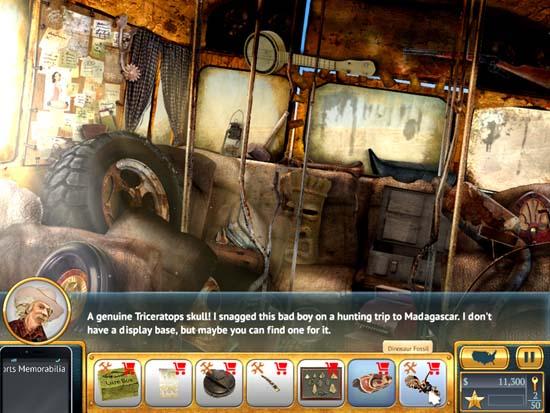 Each day sees you collecting seven different items from around the country, using item categories as your guide. For instance, if antique toys or kitchen appliances happen to be the “in” thing on a specific day, you’ll earn bonus money for “picking” those kinds of items. In each location, there will be a few hotspots to interact with, along with a hidden object scene offering you instant cash. These scenes are presented under the idea of a private contractor that has hired you to find very specific items, offering around $50-100 (on average) per item. At the end of these scenes, you’ll receive a free item for your allowance of seven, giving you the opportunity to earn even more free money, as you didn’t have to invest anything in picking it, other than time.

As you find items that interest you, you can group them together or purchase them individually from their owners. You’ll have the daily, limited ability of asking experts to appraise certain items (so you don’t pay more than the item is worth), but this can also backfire if the item turns out to be valuable and you have to pay more to pry it away from the owner’s now very interested hands.

Back in your shop, you’ll be able to combine like items to form more valuable pieces (for instance, a lamp base and a lamp shade or individual salt or pepper shakers) and then price everything to sell. Some items can be restored, making them more valuable, but if you still manage to pass a few days with items left on your store’s shelves, you can send them to auction to get rid of them. You’ll pay a fee to the auctioneer for the convenience, but with shelf space being limited (you can purchase additional spots with cash), it’s sometimes worth it to take a loss on your investment just to free up the space. 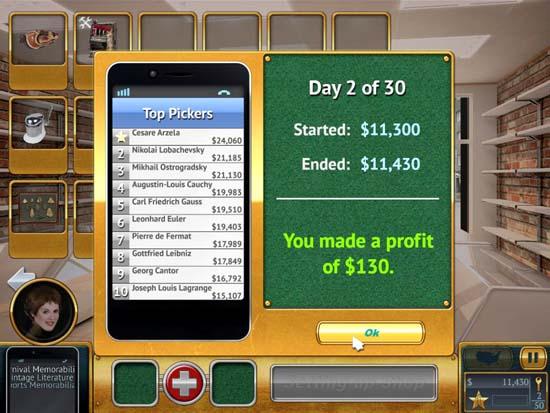 As you go along, you’ll likely replay some hidden object scenes, with these junk piles becoming less and less cluttered as you go along. Eventually, you’ll exhaust them entirely, but by using this strategy you’ll have received the most cash for nothing, simply because you didn’t pay anything for the items you’ve gathered from those scenes.

Speaking of strategy, Pickers adds in a reputation meter of sorts, dealing with the moods of the owners you’ll purchase items from. If you offend them with a low-ball offer, you may end up paying for it (in more ways than one), as they’ll stop all transactions with you for the time being, or will simply charge you more money to get back on their good side. It’s in finding a balance between haggling and outright offending that the game really becomes complex. As you gain a reputation among your clients, your haggling skills will increase, hopefully allowing you to earn more money in the process.

Technically, Pickers is an incredibly lengthy, well-designed game, save for a few user interface choices that are a bit questionable. For instance, when purchasing an item from a client, you’re not allowed to see which item category it falls into without going through a few menus first (which can also be unintuitive when trying to back out of them). Still, the game’s basic 30-day challenge mode will last you an incredibly long time (if you’re actually trying to earn money with strategy, and aren’t just playing as fast as you can), taking upwards of 3 hours for each 10-day chunk.

With achievements to unlock and keys to collect in each location, unlocking never-ending hidden object scenes back at the main menu, there’s simply a ton of content here. The gameplay may be repetitive, but the items you’re collecting are always new, so Pickers never really has a chance to feel dull. If you’re looking for a break from the standard hidden object game, be sure to give this one a try.