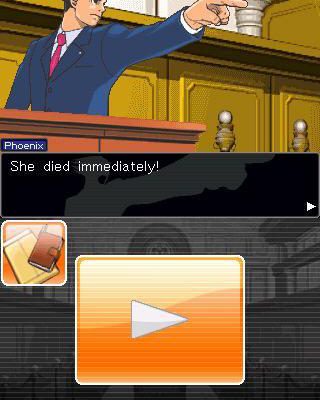 Phoenix Wright can do no wrong!

It’s not often that someone can get excited about a 9 year old game that’s been available on a multitude of systems before this, but then again, it’s not often that a game as exceptional as Phoenix Wright gets released. Originally released for the Gameboy Advance back in 2001 (and later translated to English for the Nintendo DS in 2005), Phoenix Wright tells the tale of a young lawyer tackling his first five cases.

A unique mystery game in every sense of the word, Phoenix Wright plays out a little like an interactive detective novel. The stories in each case unfold in well-written, captivating dialogue, and the only real interaction the players have is in asking questions and showing off evidence. The challenge for players is to ask the right questions and show off the right evidence to prove that witnesses are lying.

It sounds difficult, but all this really amounts to is paying attention to the story and using a little critical thinking. If the witness says they’re sure they saw the murder at 1pm, present the autopsy that says the victim died at 4. Moments like this not only prove the witness incorrect, they advance the story and take us deeper into the rabbit hole. More questions arise – why did the witness lie? If he wasn’t lying, why was he so convinced it was 1pm when it wasn’t? 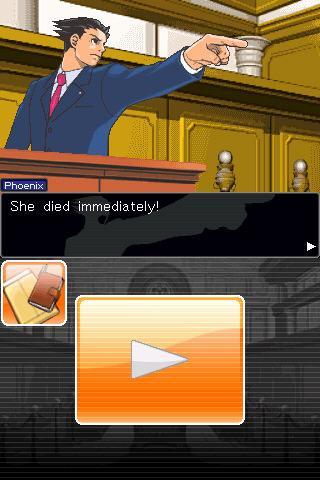 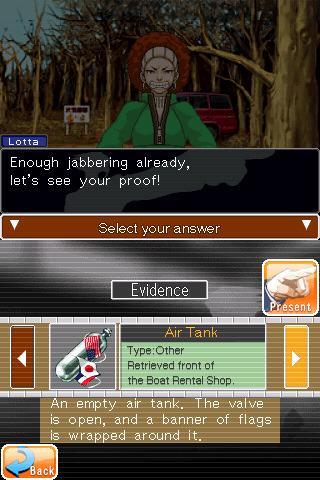 Every case in Phoenix Wright offers layers upon layers, and while unravelling those layers isn’t too challenging, getting to the heart of the mystery always proves fun. It’s the same excitement you get trying to solve TV mysteries like Columbo or Quincy (or for you younger whipper snappers, CSI: Miami) – except this is better, because instead of playing armchair detective you get to investigate the cases hands-on.

While the main focus of the game takes place in the courtroom, there are also elements of play that happen between court dates. During those times players can visit a variety of locations ranging from the scene of the crime to the location of witnesses and other key people. The conversations and exploration of rooms that occurs during the time away from court will provide new clues and evidence that you can use the following day at trial.

The first case is relatively short, serving as a tutorial to let players know what they can do. The following four cases, however, could easily last anywhere from 2-5 hours depending on the case and how adept you are at progressing through it. For $4.99, the value here is exceptional. That being said, once you’ve solved all of the cases there’s very little reason for replay.

The one thing that strikes me as odd is the business model Capcom decided to use for this release. This is a straight up port of the original 5 case game. Each case could have easily been released as its own episode. Likewise, the game could have been set up as a free release including the first case and offering DLC purchases for the rest. This latter option might have been the smartest way to go, as Capcom could have eventually funnelled episodes from later games into the one title as well. Regardless, the choices Capcom made offer an exceptional value to iPhone players – especially when you consider the 5 year old DS version that is identical to this iPhone release still retails for $34.99.

Still, being identical has its drawbacks as well. If you’re already a veteran of the popular series this iPhone release offers nothing new to whet your appetite. The controls and layout have seen some minor, hardly noticeable tweaks, but asides from that this experience is beat for beat the same game we’ve played before. Heck – the presentation even mimics the dual-screen nature of the DS.

For the most part, Phoenix Wright is a relatively simple experience. Catching witnesses in contradictions is as easy as paying attention to the story, and the game rarely ever provides moments that will stump players. Despite the lack of difficulty, though, Phoenix Wright remains one of the most engaging examples of interactive storytelling available. If you’ve never had a chance to play this before, that’s a crime worthy of trial. Your sentence? Buy this game. Now.