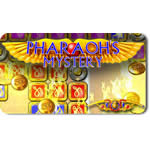 Ancient Egypt is steeped in mystery. Who built the Pyramids? What was the purpose of the Sphinx? Why did the Egyptians use hieroglyphs? Where’s the body of Akhenaten?

Akhenaten? Who’s this Akhenaten and why should I care? Well, sit back and I’ll tell you.

Some 3,500 years ago, Pharaoh Akhenaten, King of Egypt, made a decree. When he died, his mummified body was to be placed in a sarcophagus and hidden in a cave filled with gold. Moreover, the key to that treasure was to be concealed. Thus, when the day arrived, his priests carried out the order and scattered parts of the key across Egypt. From father to son, those pieces were passed on, generation by generation, until a man with nine gems appeared. Now, after three millennia, that person has been found…and it’s you!

Pharaoh’s Mystery is an amalgamation combining elements of games in the match-three, falling block and stone shooter genres. However, unlike most of those diversions, it offers just one level-by-level mode of play. Spread across a series of stages, a total of 54 levels challenge your reflexes and your noggin.

Game mechanics are straightforward. As an ever-descending wall of artifacts advances toward the bottom of the screen, you use your weapon, a paddle-like device that shoots gold scarabs, to eliminate it. Your goal? Clear the wall by destroying clusters of three or more identical artifacts. When they blow up, gold coins rain down from above. Collect enough and you’ll advance to the next level. But, aim carefully. Hit an artifact that’s not part of a cluster and it will turn to stone, becoming a useless deterrent.

You begin Pharaoh’s Mystery with three lives, additional lives gathered, or lost, as you go. If an artifact touches the bottom of the playfield, you lose a life. Catch a Soul of Scarab, described below, and a life is added. Exhaust all your lives and the game ends. You’ll resume from the beginning of the current stage the next time you play, but with just three lives.

Obviously, play involves more than shooting artifact clusters. To intensify the action, Black Bricks, Bombs and Orbs add to the mix. Fire a scarab at a Black Brick and it turns into an ordinary artifact. Sometimes this creates a needed cluster, other times not. Shoot a Bomb and it explodes, taking surrounding artifacts and stones with it. Hit an Orb and it spits out coins or a bonus. Clear the screen of artifacts and a deluge of golden coins descend.

As for bonuses, they’re crucial to success. Here’s the complete arsenal.

As with collecting coins, to activate a bonus catch it with your paddle. Even if you miss some coins in the process, it’s more important to snare a bonus, especially as you progress.

Another aspect of play is important to mention, too. Artifacts change color when those next to them are destroyed, making rapid-fire removal tricky. If you fire scarabs at two adjoining clusters, by the time the second scarab reaches its target, it may not be a cluster any longer. One or more of artifacts may have changed. So, obliterate clusters separated from each other rather than positioned side-by-side.

Adorned with striking graphics, cool visual effects and epic music, Pharaoh’s Mystery provides a solid dose of eye and ear candy. It’s also very addictive, enticing you into “just one more level” before quitting. Nonetheless, in spite of high production values, a few aspects of this scarab-filled package are less than golden.

While addictive, Pharaoh’s Mystery is also frustrating. Once you reach Stage Five, your lives will dwindle quickly as complexity reaches an exasperating level. A lack of adjustable difficulty settings means you’re stuck replaying levels ad nauseam in an effort to advance. Furthermore, play gets repetitive at this point. No new twists are added, just increased difficulty. The result? What was highly enjoyable and playable beforehand suddenly becomes an exercise in frustration. Additionally, an alternate mode of play is notable by its absence.

Ultimately, Pharaoh’s Mystery is a good game, but not a great one. While its first half is challenging and addictive, once past the midpoint play becomes wearisome. Unless you thrive on exasperatingly tough challenges, this game will have you hollering for your “mummy” well before you’ve uncovered its mystery.