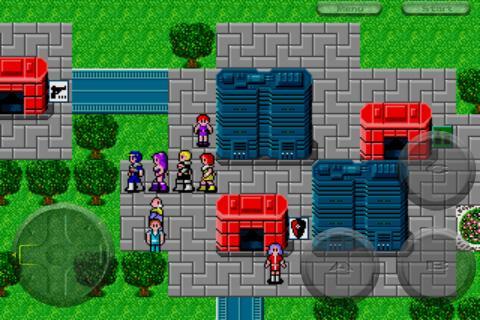 Long, long ago (back in the 1980s), before Mass Effect became the definitive sci-fi RPG franchise that it is, Sega shook things up with its Phantasy Star games. The series took the console RPG genre to the stars, something that many of us had never dreamed of. Over the years, the franchise has been updated for nearly every console generation, and now Sega is returning to its roots by releasing Phantasy Star II for the iPhone.

The game is a direct sequel to the first Phatasy Star, though the story doesn’t require any prior familiarity with the series. If you played a Sega RPG in the 80s, then this plot will sound instantly familiar: 1,000 years after an embodiment of absolute evil was banished from a distant solar system, your character starts having ominous dreams about an evil presence returning to the universe. So, naturally, your intrepid hero sets out to investigate what’s going on; along the way, he gathers a party of do-gooders to help him battle “Dark Force” before it can wipe out humanity.

This is basically your standard fantasy RPG with a sci-fi coat of paint. Technology and science are the substitutes for magic, genetically engineered monstrosities take the place of evil creatures roaming the landscape, elves are replaced with Palmans (an alien race with identical features), etc. But, at the same time, I didn’t care that I’d seen this all before: the game was generally well-written and fun to play, even though it’s two decades old.

The action on your iPhone’s screen is controlled via a directional pad on the left and “A” “B” and “C” buttons on the right. You’ll use the pad to smoothly navigate around the top-down maps and interact with people and objects via the buttons. The maps will yield random combat encounters as you wander about.

Anyone who’s played a turn-based RPG will instantly feel at home when a battle begins. Each of the four characters you can control in a fight has two basic options: to attack or use an ability (such as special attacks, items, or a unique power). It doesn’t really get much deeper than that, but battles grow challenging over time thanks to increasingly difficult enemies, which means that you’ll have to use a fair amount of strategy if you plan to survive.

When it comes to production values… well, this isn’t going to win you over if you’re looking for something groundbreaking. Sega’s iPhone port doesn’t feature updated graphics or music. For me, this is great because it’s a heart-warming trip down Nostalgia Lane, but I could see someone who wasn’t a part of the 16-Bit Generation being put off by the retro look. At the same time, this game was clearly brought to the iPhone for those of us who played it as kids, so I can’t really say the inclusion of old-school imagery or sound was a bad design choice. 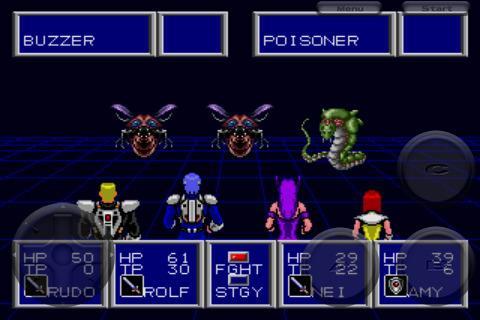 In spite of the retro fun, there are a couple of irritations with Phantasy Star II, though they’re far from being deal breakers. When you start the game its controls are ever-present, which is weird to see during cutscenes. It’s a little jarring to watch dialogue get exchanged or important moments take place when the D-pad and action buttons are sitting on top of the image. However, if you go into the option menu and select “switch view”, the image shrinks into a window (roughly two-thirds of the screen) and the controls sit outside its borders.

The other problem is that movement around the game’s various maps is slow. Like, really slow. While this is a faithful emulation of how the game worked when it was released for the Sega Genesis, maneuvering around the maps feels like a crawl when you compare it to other RPGs that have come out since. Having played a number of emulated games on my PC over the years, a simple solution was that many emulators simply gave players an option to speed up gameplay. If Sega ends up providing some updates for Phantasy Star II, allowing players control over speed would (I’m sure) be greatly appreciated.

Phantasy Star II on the iPhone allowed me to re-experience a game that I loved when I was growing up. I suspect that a lot of other people who play it will feel the same way, looking at it through rose-tinted glasses of nostalgia rather than judging it like we would a new RPG. That said, if you’re new to the Phantasy Star series, you might still want to check it out: this is still a great game, provided you don’t mind it feeling a little dated.