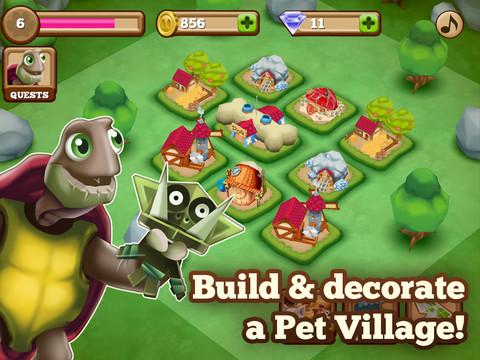 Pets are keepin’ it real against the orc horde

It’s no secret that the mobile-gaming market is a crowded place, and eking out a niche on the App Store is no easy task. So, Supercell can perhaps be forgiven for the aggressively generic title of their new strategy adventure, Pets vs Orcs. The game makes a great first impression, but is this animal kingdom built to last?

In Pets vs Orcs, you take control of an animal village that has seen its pups kidnapped by orcs. The “pets” part of the equation is comprised of dogs, cats, bears, and even turtles. Somehow they all coexist together in harmony, and you’ll need to build up a stronghold and army in order to take back the future generation of wild kind.

The game does a good job walking players through the basics, building structures and engaging in simple battles along the way. Pets vs Orcs is a strategy game of the casual kind, meaning you’ll build training and resource structures needed to execute your campaign against the orcs, but progression moves at a very relaxed pace.

There are two main resources in Pets vs Orcs: gold and diamonds. You’ll use gold to make all purchases in the game, including new buildings and troops, and diamonds allow you to speed up production. You can earn both resources by completing missions, and of course, there’s always the option to buy additional gold with real money. The prices for in-app purchases, however, are absurd, with the top purchase coming in at $99.

Pets vs Orcs consists of essentially two main ingredients: city building and combat. The game’s combat consists of pseudo-castle defense, similar to games such as Cartoon Wars, but there are some tweaks that make this particular strategy adventure a breath of fresh air. 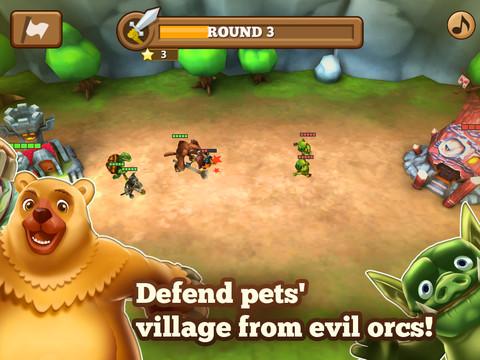 Rather than have you simply send out units as if they were on a conveyor belt, assaults are turn-based. You’re allotted stars to spend on units each round, and a meter is used to time engagements. Once a round is completed, you can send out another group of units in whatever combination you like. Once you send units to battle they’re gone for good, adding another layer of strategy to the mix.

Unfortunately, there are some balancing issues that make progression quite tedious. You can repeat missions as often as you like, but since the cost to train new units consumes most of the money earned from battle, it’s difficult to get ahead. Gold earned from resource structures is paltry, and ultimately, Pets vs Orcs is a game that can only be played in very small doses.

Visually, Pets vs Orcs is a very attractive package set in a polygonal world. The colors are vibrant, the overworld and creature models detailed, and the entire game has a playful vibe that’s very inviting. The music and sound effects make a great match for the rest of the presentation, though the framerate does tend to chug a bit on older devices.

Pets vs Orcs has a lot going for it, not least of all its fresh take on mobile-strategy combat. Unfortunately balance issues and ridiculous IAP prices mean progressing through the game will either be very time consuming or cost you a fortune. With a polished presentation that’s easy to jump into, Pets vs Orcs is a great start, but it may not be compelling enough to keep players around for the long haul.

Ball on a Wall Review