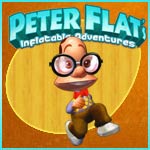 Peter Flat starts a new job at the Corporate Corporation and must prove himself by performing various quirky tasks as his world transforms from 2D to 3D. As game premises go, it’s an intriguing one, made even sweeter by the fact that it’s designed by the same studio that created the charming and stylish Ciao Bella. What could possibly go wrong with Peter Flat’s Inflatable Adventures? The answer, unfortunately, is a lot.

The game starts out promisingly, with Peter Flat arriving for his first day on the job courtesy of a fun little animated movie with a Saturday morning cartoon vibe. We learn that he has a rival at the company, Rick DeVille, who is scheming to thwart Peter’s chances to succeed by deploying henchmen to interfere with Peter’s tasks.

Peter begins by completing his job training that acts as a tutorial to learn how the game works. Then he starts his work week. Each day is divided into 10 tasks on Peter’s To-Do list that he must complete before he can move on to the next day, with more than 50 mini-games in all. The nice part is that you can do the tasks in any order; the bad part is that the tasks themselves, on a whole, aren’t all that fun.

Many of the tasks are of the variety where Peter has to walk around and collect certain items hidden around the level, such as fetching eight file folders for the secretary, finding the four tires to his car after Rick’s henchmen hide them, and collecting office supplies from different shops in the mall. Peter moves in four different directions, and he can also perform various context-sensitive actions like getting coffee from the coffee machine or using items he’s purchased with coins he’s collected.

Variations on the theme include having to climb to the top of a building by navigating your way up a series of moving platforms, pulling levers at a factory so that a box moves down a conveyor belt into the waiting transport truck, and navigating a hedge maze to find the boss’s wife’s lost house key.

Given the right balance of inspired level design, interesting graphics and challenging goals, these mini-games could have been great – after all, who doesn’t enjoy a bit of corporate satire? One problem, though, is that the levels lack character. Generally, it’s the same boring office, industry or mall-type settings over and over again, filled with annoying little pieces of moveable scenery that Peter frequently gets stuck on, with henchmen enemies that run back and forth.

Case in point: One of Peter’s earlier tasks is to drive one of the company’s important clients to the airport. This could have been a wild and crazy ride dodging other cars, making hairpin turns and racing against the clock. Instead, Peter simply drove down the road, collected a few coins and plowed through a few road blocks until he hit a detour that led him into a field briefly, then arrived at the airport. The whole thing was over in about fifteen seconds.

Also, the controls are a little different for each mini-game and sometimes it’s not clearly spelled out exactly what you’re supposed to do. For one task, Peter was supposed to test out the company hang glider by floating down from a rooftop. I crashed to the ground twice before I figured out that the space bar made him flap his arms.

But it doesn’t end there. There’s no autosave system. Instead, you have the choice of manually saving your game after each level, or continuing without saving. Why would anyone want to continue without saving? Why even give players the option? If you don’t end up saving and Peter ends up losing all his lives (for failing tasks, touching enemies or falling), you have to go all the way back to the point you last saved and redo all the levels over again.

One-hit death for being touched by one of Rick’s henchmen also seems unnecessarily harsh, especially when it’s so easy to get tripped up by the scenery and cornered. You can buy a kind of ray gun weapon to fire, but it inexplicably has no effect on the henchmen.

To round out the game’s list of woes, you’ll also frequently encounter a “Loading…” screen between mini-games.

In short, it’s hard to call Peter Flat’s Inflatable Adventures anything but disappointing. Aside from some cool 3D effects in the driving mini-games like going up and down hills, there’s not much to praise. The best part of Peter Flat’s by far is the cartoons that help to advance the plot in between mini-games. It’s a shame that none of the essence and character of these animations made it into the actual game.