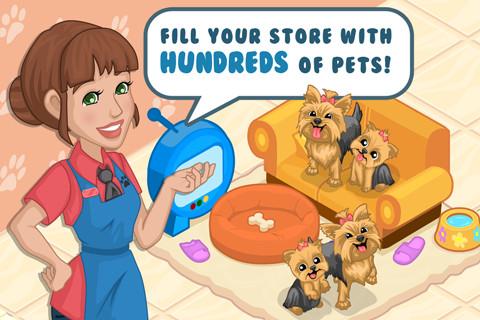 The latest incarnation of TeamLava’s “Story” franchise has released onto iOS in the form of Pet Shop Story. Having already visited the business simulation realms of restaurants, zoos, and bakeries, now it’s time to give cute little puppies and kitties a whirl. Centered around the same formulaic design as its predecessors, the new release offers nothing dramatically new to the genre or even the franchise itself. Nevertheless, its system has worked in the past and Pet Shop Story does improve on the relatively iterative series.

As one can probably guess, the whole core of Pet Shop Story is to create a successful pet store filled with any number of household critters ranging from dogs, to cats, to the more exotic. Placing pens around the virtual space, it is the typical routine of collecting funds, feeding animals, and then buying more.

The process is nothing that players haven’t seen before. Players begin their growth by building out pens for various animal species and, once constructed, they offer periodic income and experience. As per usual, the higher the level the animal, the longer it takes to construct but the greater its payout. That said, this all acts more like a zoo than a pet shop, as the animals never appear to be actually bought (they technically are, but they are not removed from the player’s virtual space). Taking this into consideration, it is decidedly easy to create very full pet space.

Each pen can hold up to a certain number of pets too. Upon buying one, players can opt to buy an adult mate for the species of dog or cat, the pen holds, in order to breed puppies or kittens. This also plays into a collection mechanic in which the game tasks users with completing full “families” of animals. Nevertheless, while such is done by merely tapping a “Breed” icon when a pen is selected, players can usually only breed one new baby at a time; lest they spend virtual currency to unlock extra nursery beds.

The game becomes a little more interesting when players unlock the ability to cross-breed pets. Once this is available, Pet Shop Story offers a bit more player reward — beyond the simple aesthetic of creating a cute looking shop — as it allows them to experiment in creating new pet types unique to their store. This reward becomes even greater since the TeamLava app is a social title. 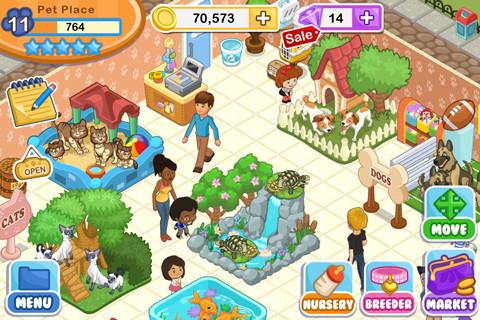 Like all the Story games before it, Pet Shop Story allows players to friend one another, send gifts, and view the shops and animals that they have created. Additionally, players can visit the spaces of other random users in the community and interact with their pets in order to garner them experience bonuses. The more this is done, the greater the likelihood that the user will be ranked near the top of this community list. Unfortunately each pet in each shop can only be utilized for this by one user, making it a bit of a double edged sword, as the popularity of the Story games makes it virtually impossible to do this with random players.

The TeamLava game also ups the ante a little bit with some added with a “Shop Rating” that displays how successful one’s business actually is. Ranked from one to five stars, it is measured by the variety of pets one has, the number of decorative displays, the size of one’s nursery, and the overall store size. Of course, this is not entirely equated to success, as things like nursery size require virtual currency to grow, so the mechanic is as much as a tool to entice player spending, by suggesting more needs to be done for one’s shop, as it is to measure their “success.”

Nonetheless, Pet Shop Story is another solid, yet standard, game from TeamLava. It has all the fixings of its predecessors and as such is likely a game that will do very well. If nothing else, it offers the same type of play that its fans have come to know and love and does so in a new visual style. In fact, Pet Shop Story tends to look a lot better than the past games in terms of overall art quality and animation (even if many of the avatar assets are reused constantly). All that said, if you are a fan of the TeamLava Story games, then this is an app you’ll probably enjoy as well.