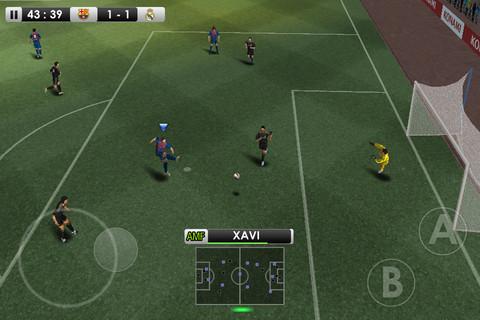 I don’t make it a practice to review a game by spending most of my time comparing it directly to a different game. But this time out I’m going to make an exception. You see, a few days ago I played and reviewed FIFA 12, and right after it came out Konami released Pro Evolution Soccer 2012. If you release a game that quickly after your competition, then really, you’re inviting the comparison. The problem for Konami is that they come up short on just about every point for me.

I’ve always enjoyed the soccer video games, but I’ve never been crazy for them. I know enough to know that two games seem to go at it year in and year out for the soccer fan’s dollar. EA’s FIFA series and Konami’s Pro Evolution Soccer. EA has always skewed more towards arcade style and Pro Evolution Soccer is more simulation. If FIFA is like the racing game Burnout, then Pro Evolution is like Gran Turismo.

Recently I talked about how well FIFA made the jump to touch screen devices, and how I typically avoid the console to iOS ports in general cause the trip isn’t usually kind. Sadly, Pro Evolution Soccer is that kind of game. The graphics are rough around the edges – a problem that’s exacerbated on the iPad’s larger screen. The animation is stunted and doesn’t flow well when moving around the field.

The recent FIFA release incorporated swipe controls into its button presses, taking the 2 button virtual controls and adding some much needed options to the control scheme. In Pro Evo, your only option is to hold down the button long for more power. It’s too simple and lacks the nuance needed. Do I want to chip the ball over a defender or send a player on a run and pass to him? It’s not really possible to have that level of control in Pro Evolution Soccer 2012.

There are a ton of teams and leagues in Pro Evolution, but some of the big ones are markedly absent. Most casual soccer observers will recognize Manchester United, Liverpool or maybe Chelsea. Well they’re not in the game. Well, maybe they “kinda” are. Manchester United, for example, are listed as “Man Red.” I’m assuming for licensing issues. Still, if you’re not highly attuned to these tweaks, it just looks like the teams aren’t there. Also, for North American soccer fans, there’s no MLS. 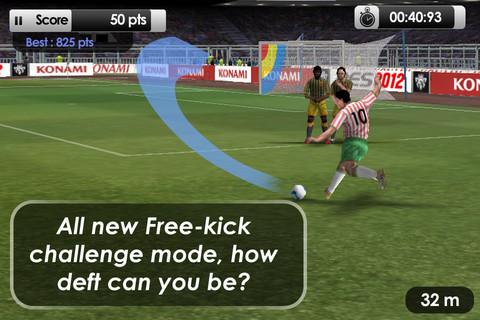 Pro Evo 2012 is initially a free download, though, so you can get involved and check it out at no cost to see what’s what. You can engage in superchallenges against friends’ line-ups, but games against the computer are limited to a half. It’s a weird limitation, though understandable for what is essentially a demo. Good news though, when you make the in-app purchase to the full version, it’s a universal app… which is a term we’d really love EA to learn.

So graphically, gameplay, and feature wise, Pro Evolution Soccer 2012 comes up short against FIFA 12. Is Pro Evolution Soccer 2012 a terrible game? No, not really. It’s just nowhere near as good as the competition, and having both released in the same week makes it hard to make the argument that you should choose Pro Evo over EA’s offering. While home consoles may tell a different story of which is better, on iOS devices, the choice is really pretty clear.

Echoes of the Past: The Citadels of Time Review