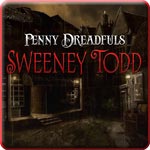 If you’re a fan of musicals, you probably already know the basic gist of hidden object game Penny Dreadfuls: Sweeney Todd: An insane barber kills people, then hands them off to his girlfriend to be baked into pies. As one of London’s finest, it’s your job to track him down and solve the case, but you’ll need to sort out the clues, first.

It all starts out normally enough as you’re called in to locate a sailor who’s gone missing As a policeman, it makes sense that you’d be scouring the area for clues, which is where the hidden object hunting comes in. Working from a list, you’ll have to find era-appropriate items in such intriguing locations as an insane asylum, Guttersnipe Alley, and the local pawn shop.

The environments are stunning and richly detailed, effectively evoking the grubbiness of 19th century London, but the game’s adherence to its setting can be mildly problematic, too. Unless you’re familiar with items like haggis and spotted dick, you may find yourself more than a little nonplussed by some of the things you’re asked to identify.

In addition to the standard items on your list, you’ll be looking for specific clue items that will help you solve the various parts of the case. In some cases, you’ll find them simply by successfully completing the search of a particular area, but in others you’ll have to solve a puzzle first. And hoo boy, are they doozies. In many cases, just getting a handle on what you’re supposed to be achieving is as difficult as the actual puzzle itself. These aren’t the standard puzzles you’ll typically find sprinkled in HOGs – though you will have to assemble a jigsaw at the end of each chapter – these are genuine brain twisters that will require keen observation and flexible thinking to defeat.

Fortunately the game has a robust hint system that will give you a series of nudges in the right direction, but if that fails, you can also opt to simply skip it altogether. Asking for help impacts the final grade you receive at the end of each level, as does making incorrect clicks during a search, but the small ding to your pride is usually worth the assistance.

Not all of the game’s puzzles are that abstract, though – in some cases, you’ll have to solve a more straightforward challenge to progress, such as finding a way to safely get a hornet’s nest out of the way or see through a grimy shop window. In most instances, the solution is no more complex than waiting to find the correct item, but every now and then you’ll have to apply a bit of extra brain power. It’s not enough to find a mouse trap, for example, you also have to find the bait to use in it.

Given that Penny Dreadfuls: Sweeney Todd is based on a musical, you’d expect it to have at least a bit of singing, which it does. Whether or not this is a good thing depends on what’s more important to you: faithfulness to the source material, or the ability to carry a tune. Not that the musical interstitials are bad, really, they’re just not nearly as good as the performance turned in by the gruff policeman who narrates the rest of the game. His wisecracks when you use the wrong thing to solve a puzzle, or when you’re taking too long to locate an item in a hidden object level are as amusing as they are cutting. If only the singers were as convincing.

The cutscenes are skippable, and if you’re already familiar with the musical’s plot, you can pass them by without concern, but if you want the complete picture of what’s been going on in Sweeney’s barber shop, you should really try to sit through them.

The game is fairly long; even if you skip out of the puzzles, expect 4-6 hours of gameplay, easily. And aside from some gritty dirtiness (being that you’re in the London slums), the visuals themselves aren’t gruesome in spite of the game’s subject matter. Although you’re told that the victims are being baked into pies, you don’t actually see it – in other words, squeamish gamers shouldn’t have to worry about seeing anything visually upsetting.

Penny Dreadfuls: Sweeney Todd is an incredibly polished adventure with beautiful visuals, well done hidden object sequences, and fiendishly clever puzzles. Get this one without delay. The Demon Barber awaits!