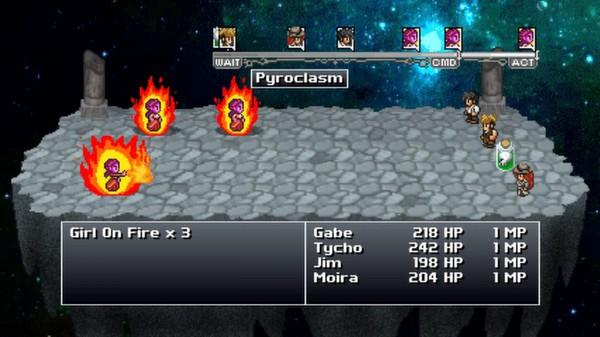 Reunited and it feels so good

It wasn’t so long ago that the folks at Penny Arcade announced they wouldn’t be pursuing a third game in the Adventures series, due to lackluster sales and then-developer Hothead Games being occupied with working on DeathSpank. But life found a way, and here we are with Episode 3. It may seem like quite the departure at first, but it maintains all of what made the first two games so great.

Zeboyd Games, whose past works include the comedic, retro-inspired Breath of Death VII and Cthulu Saves the World, is the new developer at the helm. Penny Arcade’s On the Rain-Slick Precipice of Darkness: Episode 3 (PAORSPDE3 – even the acronym is long!) follows in the footsteps of those two games quite nicely, featuring a 16-bit aesthetic and style of gameplay that would feel right at home on a SNES cartridge.

Like the first two Penny Arcade titles, Episode 3 is a turn-based RPG at its core. But that only scratches the surface of what’s going on here. For starters, there’s a meaty class system that features quirky titles like “Dinomancer” and “Tube Samurai”. The latter of those two is a nod to a certain Penny Arcade character, and you can expect to find similar references throughout the entire game. I don’t want to spoil anything, but you may or may not encounter Ben Kuchera while you play.

The bizarre class system provides players with a lot of decisions to make, such as whether they think they’re better suited as a hobo or an evil crustacean. Believe me when I say that it’s not an easy decision to make. The plus side is that you’ll typically have 3-4 characters in your party, and you can equip them with whatever class you like.

Another similarity between Episode 3 and the first two titles comes in the form of enemy encounters. You’ll see enemies awaiting your arrival throughout the map, and some of these battles can be avoided if you’d prefer. But seeing as how your HP regenerates at the end of each one, it would be foolish to not run around and kill everything that moves. Just don’t expect to stay in a single area and grind, as encounters are finite. That may rub some RPG fans the wrong way, but I see it as a welcome instance of streamlining.

Besides, leveling up is only part of the recipe for victory. Saving up and purchasing new weapons for your characters — all of which are as absurd as you’re probably imagining — is just as vital. Who knew the severed hand of a hobo could be such a tour de force of destruction?

If there’s one aspect that’s improved in this game, it’s the writing. Don’t get me wrong, the first two games had plenty of clever dialogue and absurd story beats, but Episode 3 had me laughing out loud on more occasions than the first two games put together. In fact, I took the time to approach every item I could, all in the hopes of uncovering more text to read.

Just as one would expect from a collaboration between Zeboyd Games and Penny Arcade, there’s no shying away from absurdity here. At one point, for example, a character drives his car into the attic of mansion, then promptly turns around and drives back out into the night. You also encounter (and battle) octopi donning mime make-up, an event that’s not only acknowledged, but wholly accounted for, in the game’s surreal storyline. 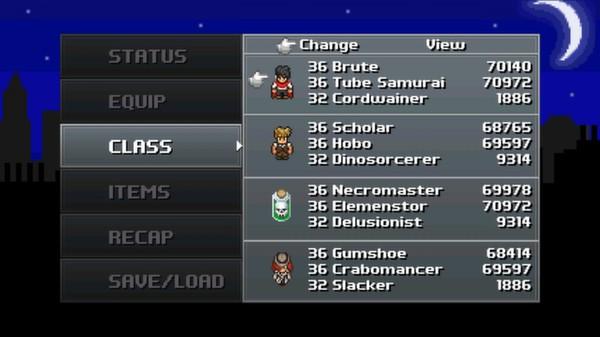 But such strangeness is old hat to players of the Penny Arcade games at this point, so let’s discuss what’s different between this game and the first two. Outside of the immediate visual distinctions, the loss of the “Player” character is probably the biggest change. For those unaware, the first two games allowed you to customize a character and play alongside Gabe and Tycho. This time around, you’ll be in direct control of the two characters, without any sort of custom-made proxy. It doesn’t translate to a lot of tangible differences in-game, but it does mean you can play the game on any platform you want without the worry of carrying your previous character over.

Slight differences or not, Episode 3 manages to capture what had so many people smitten with Episodes 1 and 2. The writing is still incredibly clever, and the combat a ton of fun. As a bonus, those who haven’t played the first two shouldn’t have much trouble jumping in here. There are allusions to events that transpired in the first two games, but it takes very little time to pick up on the basic premise. As someone who loved the first two titles, and was saddened by the cancellation of the third, this game is everything I could have hoped for.

Oh, and the ending leaves plenty of room for a fourth game.