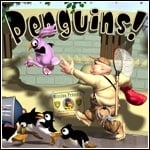 Once upon a time there was a popular game called Lemmings that challenged players to herd a pack of furry critters through an obstacle course of sorts without too many of them taking headers off a cliff. It was great fun, but these days penguins seem to be the popular creatures du jour; witness “March Of The Penguins” on the silver screen and now Penguins! on your home screen.

Saving the birds from waddling to their doom requires following them around an eight-zone zoo and strategically placing gadgets that will enable them to reach exit doors. But you need to use just the right gadget at just the right time in just the right place — and that, my fine-feathered friends, is a lot harder than it sounds.

“Birdbrain” players will immediately want to reach for the “hint” button and may be distressed to learn that the hints aren’t always sufficient to solve the puzzle. After about 12 minutes, gamers are given the option to skip the level and go on to another of the assortment of 100-plus, but that can seem like an eternity when your patience ran out 11 minutes ago.

Each level begins with a fresh, lovely landscape that is sometimes so large that you need to scroll right and left to see it in its entirety. Twenty-five or so penguins enter the screen and begin their march towards an abyss or an aggressive zookeeper. Your mission — should you wish to accept it — is to quickly assess the situation to determine how you can redirect the penguins toward the level’s exit. Will you need to place the trampoline so the penguins can bounce up to the hanging trapeze which will swing them towards the cannon you’ve situated to fire them at the extension ladder that will permit them to climb up to the spring which will send them skyward to the warp entrance which … well, you get the picture. And it’s all done to a jaunty little tune with lots of handclaps; you’ll want to clap along but clapping and saving penguins at the same time, you’ll find, are mutually exclusive.

It all seems like great fun until you realize that you haven’t a clue as to how to start. At first blush, none of the gadgets seem to be appropriate, but then you suspect that some of the gadgets are hidden away in boxes that the penguins need to unwrap before you can use them. To complicate matters, some gadgets need to be reversed to function properly, there are switches that must be flipped to activate mechanisms, often gadgets need to be placed and whisked away at just the right moment, and, even if you do everything just right, that may not be enough. For, if you don’t move quickly, at the end of the level you may learn that even though you solved the puzzle, you didn’t save enough penguins in the time allotted.

However, should you be successful, you’ll find that completing each level brings a grand assortment of rewards. You can be awarded a medal for the number of penguins you rescued, another one for doing it quickly enough, your time is posted on the Penguins! leaderboard, and you’ll have the opportunity to go shopping in the Penguins! store using the coins you picked up along the way. Feel free to buy additional levels, cute costumes for your penguins, new tunes, and more.

And if you didn’t perform as well as you’d hoped to, well, replayability is one of the game’s strengths. You can always go back to any of the previously completed levels and try again, hoping for a better outcome than before.

Penguins! walks a fine line between being challenging and being too challenging. Very few of the puzzles are easy, which will intrigue gamers who are into this sort of thing. And there there’s great satisfaction when the penguins realize they’ve been saved and respond with gleeful shouts of “whoopee” and “woo-hoo!” But when you’ve studied the puzzle and tried it again and again and again without success, there’s also satisfaction in letting the little creatures perish … and moving on to something a bit simpler.