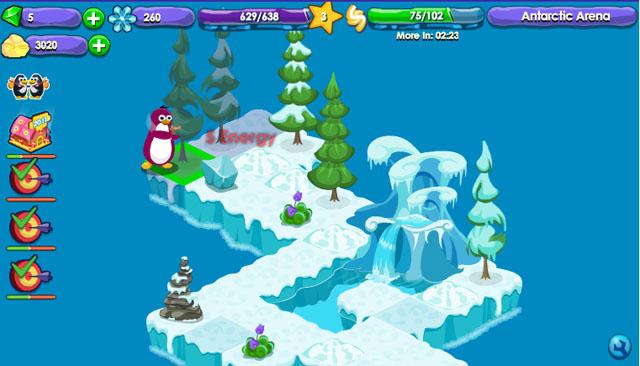 Penguin World is a game that goes beyond “novel.” It’s honestly a bit strange, by Facebook or anyone else’s standards. The basic concept is that you’re a penguin and apparently what penguins do all day is forage for lost pottery in the Arctic, or possibly Antarctic, wilderness while fighting off polar bears. The game plays like a novel fusion of treasure hunting games like Treasure Isle and the Club Penguin virtual world for kids. The game might be intended more for children than adults, though it’s a little hard to tell at times.

The basic idea of Penguin World seems to be that you’re a penguin who wants to live a comfortable middle-class sort of lifestyle. Your only way of earning money is to travel around various islands covered in snow and try to dig for treasure. This might also mean chopping down trees, blowing up rocks, or taking sledgehammers to things. Sometimes you find gold, which you need to buy tools and certain penguin luxuries, and other times you find lost penguin treasures and Ice, a pseudo-currency you spend to build things like your igloo.

You also sometimes uncover a predator of some sort, like a polar bear or leopard seal, who strenuously objects to your fantasies of wealth and luxury. Also, it probably wants to eat you. Uncovering a predator triggers a mini-game where you either need to fight or outrun your adversary. You can play these games with the keyboard or with a mouse (playing them with a laptop touchpad only ends in tears). The usually involve something very simple, like clicking a button to throw snowballs at attacking polar bears or clicking a button to jump over obstacles as you race down a ski slope. They’re fairly similar to certain mini-games you can play in Club Penguin, but the controls are more sluggish. 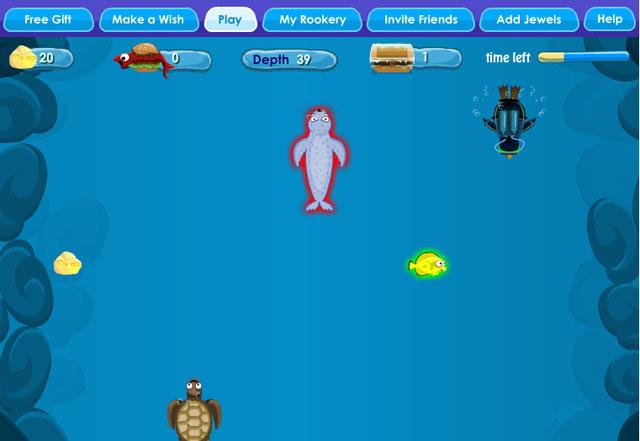 Penguin World doesn’t suffer from any massive lag or stability issues, but parts of the game just don’t feel quite right. Whenever a pop-up needs to inform you of something like a new quest or gaining a new level, it’s like the game suddenly begins running in slow-motion. Controls in the mini-games often feel sluggish or floaty, which can make it hard in games like diving or throwing snowballs that call for a certain amount of accuracy. The mini-games are not optional and there doesn’t appear to be any way to simply skip them. 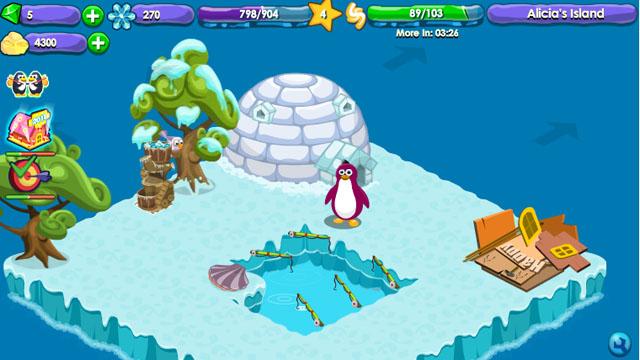 Once you’ve gathered up enough resources, you can return to your home islands and build structures or place decorations you’ve found while digging for treasure. You can build some extra things only by turning in particular sets of treasures, which makes the collecting aspect of the game feel a bit more relevant than it does in some others.

Building up your own little island is fun and the décor is certainly unusual, though it’s hard at times to understand what sort of fantasy living as a wealthy penguin in an igloo is supposed to be.