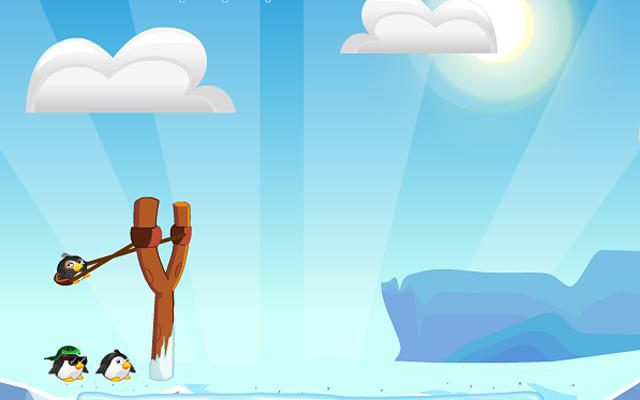 If Rovio is indeed planning to release their iPhone smash hit Angry Birds onto the PC/Mac like the rumor mill has been whispering, they’d better hurry up because the desktop clones are already coming out of the woodwork. Case in point: Pengu Wars, aka Angry Penguins.

Forgive me if I spend most of the review comparing Pengu Wars to Angry Birds – it’s not usually something we like to do here at Gamezebo but in this case the similarities are too many to ignore. Like Angry Birds, Pengu Wars is a physics-based arcade game where the goal is to defeat enemies perched on structures by using a giant slingshot to fling attack birds at the structures to collapse them.

And like Angry Birds, the enemy antagonists in Pengu Wars are thieves – although in this case you aren’t attacking egg-stealing pigs, but rather a fish-stealing trio of animals consisting of walruses, Emperor Penguins, and what look like giant white snow hamsters. 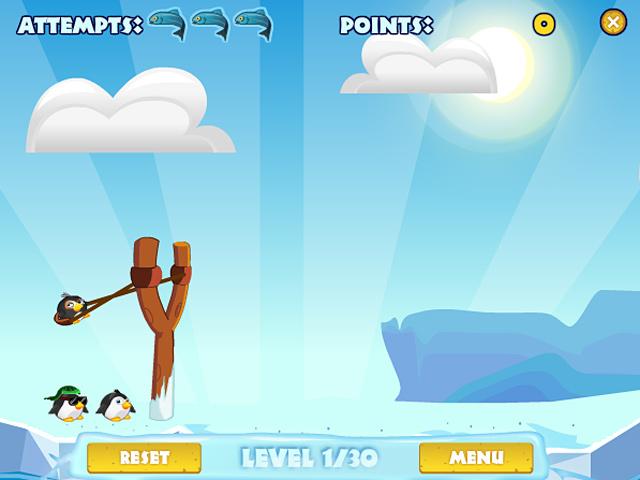 Once a penguin is loaded into the slingshot, you aim it by using the mouse to change its trajectory, then click to launch the bird into the air. Two of the three penguin types have special powers that can be activated mid-air: a speed boost, and a triple shot (the penguin splits into three birds to cover a wider area).

The one thing Pengu Wars does have going for it is cute graphics. The arctic backdrops aren’t bad looking, and the animation that the penguins make when they finish their attack (dive back into the water to live another day), is less disturbing than when the birds in Angry Birds just sort of “poof” out of existence.

But Pengu Wars is largely lacking charm and cleverness. There are no fun cutscenes to set the scene, and the music is disappointingly bland compared to Angry Birds’ catchy theme song.

The level designs are uninspired too. While the controls work well on the PC, the structures you have to knock over aren’t very sophisticated, sometimes consisting merely of columns with an enemy perched on each. I occasionally encountered glitches where enemies wouldn’t disappear even after I knocked them down.

Most unforgivable is the fact that there’s no way of scrolling to see the entire playfield like you can in Angry Birds. This makes it extremely hard to plan or strategize, meaning you’re basically just shooting blindly and hoping for the best. In spite of that, I seemed to be able to clear a level on the first try more often than not just out of blind luck. 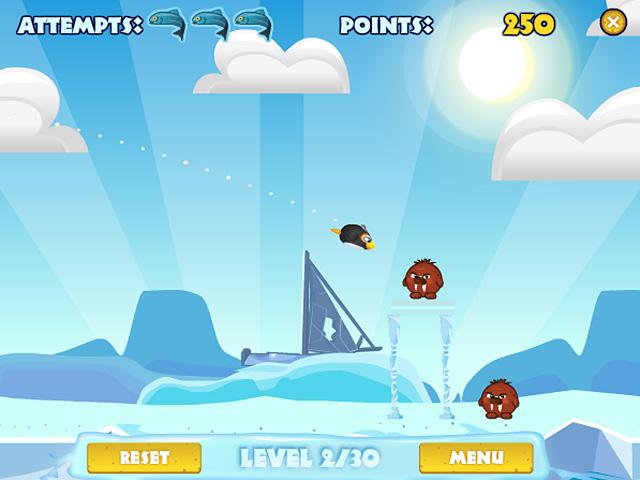 Pengu Wars also uses an annoyingly retro system of limited lives. You start with four, and for each level failed you lose a life. If you run out of lives, you lose all of your progress and have to start over again. Compared to Angry Birds and other offerings by companies like Chillingo, where levels remain unlocked once beaten and can be revisited to pursue higher scores, Pengu Wars’ system feels unnecessarily harsh and outdated.

Even Pengu Wars‘ level editor – something that could be very fun – seems like a confusingly tacked-on feature. It lets you create customized levels by dragging and dropping pieces to build structures and placing penguins and enemies, but once finished all you can do is save the level, load previously saved levels, and “test” them by playing them through yourself. There’s no way to send them to friends or incorporate them into the main game at all.

Pengu Wars is playable, but is an example of a clone that doesn’t bring anything new to the table and is actually a much worse than the original game it borrowed so liberally from in the first place.